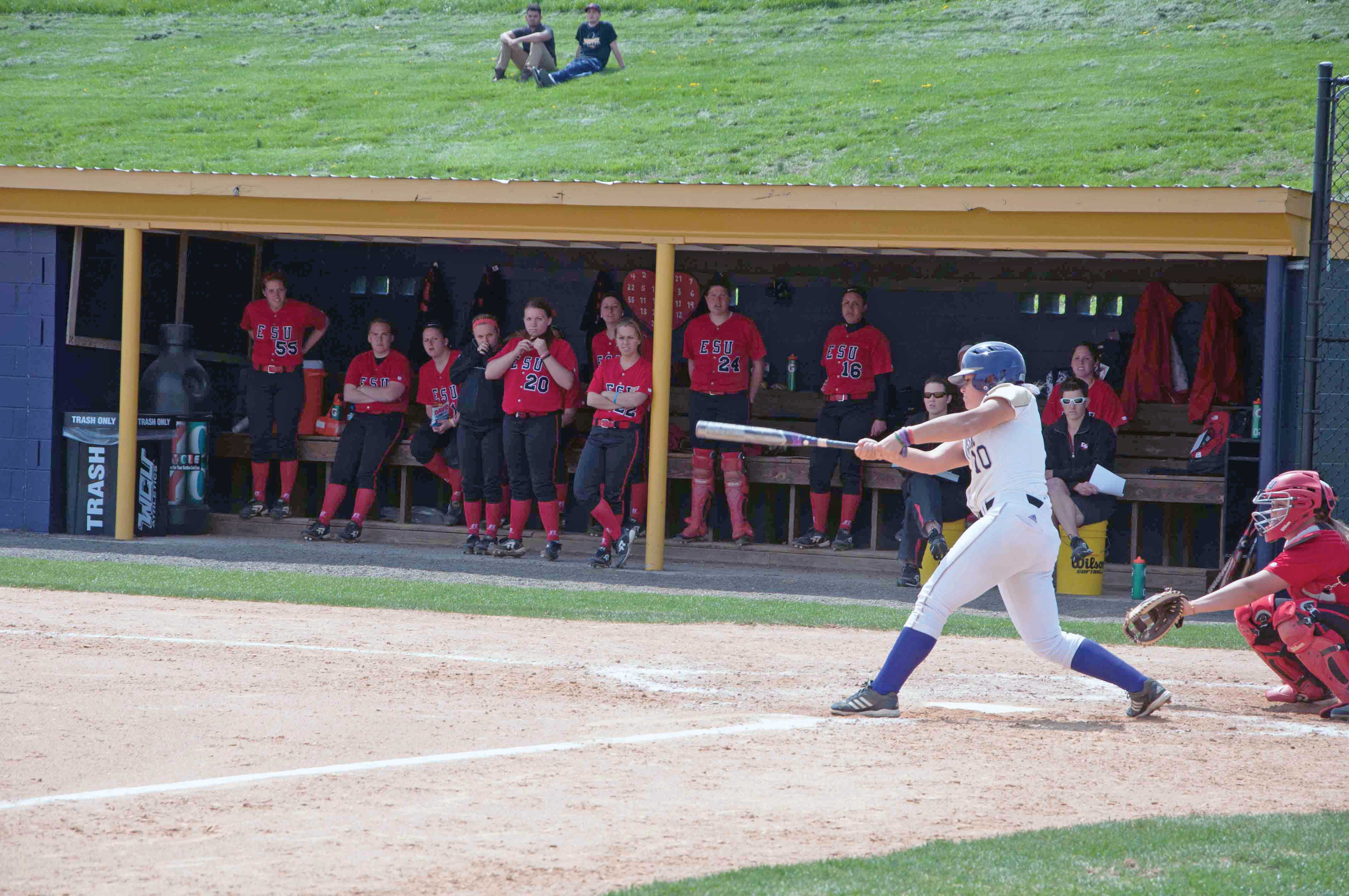 After a week where they went a perfect 6-0, No. 23 West Chester (26-11, 13-3) began the week with a doubleheader at Lock Haven (10-21, 5-11) on April 13. The Lady Rams were shut out 3-0 in the opening game, with Kim Murl (8-5) suffering the loss on the mound. West Chester continued to struggle in game two of the doubleheader, losing 4-1 with the lone run of the day coming off a JP Norris RBI single. Michael McSpadden (9-1) suffered her first loss of the year, allowing seven hits and four runs in 2.1 innings pitched.

After being swept by Lock Haven, West Chester had the opportunity to bounce back the following day with a doubleheader against Mansfield University(15-7, 7-5). As the starting pitcher for the Golden Rams, Murl helped her own cause with an RBI single in the first to give West Chester a 1-0 lead. Mansfield answered back with four unanswered runs to get out to a 4-1 lead after four innings. Kelly Anderson ignited the comeback in the sixth with a two RBI double, and Jillian Murray tied the game up at 4-4 with an RBI single. The Golden Rams won the game in the eighth thanks to a two RBI single by Erin Quense, and an RBI single by Laura Altenburger to win the first game 7-4. West Chester completed the sweep of Mansfield in game two with a 6-2 victory. Murl picked up her second win of the day to improve to 10-5 on the season. Norris went 4-4 in game two, and Quense led the Lady Rams with two RBIs off a two-run home run in the second.

The Golden Rams traveled to Millersville University (20-20, 8-12) for a doubleheader on April l8. Murl pitched a complete game but suffered the loss for West Chester in game one in a 1-0 loss. In game two, the Golden Rams bats’ failed to show up yet again, as they suffered another shutout loss 4-0.  Katie Erb pitched five innings and suffered the loss, allowing four runs on seven hits.

The following day, the Golden Rams traveled to Shippensburg University (25-9, 11-7) for a doubleheader. West Chester fell behind 1-0 in the second, but that would be the lone run Shippensburg would send across the plate for the rest of the game. The Lady Ram bats exploded for a seven run fourth inning led by two RBIs each by Megan Kelly and Murray for a 7-1 lead. West Chester added to its lead in the fifth, scoring three more runs to lead to an eventual 10-1 victory in game one. Murl picked up the win to move to 11-6 on the year. Game two was another blowout, except this time, in favor of Shippensburg this time. West Chester scored its lone run in the second off an Ali Vavala RBI single with Shippensburg up 2-1.  Shippensburg would score six unanswered runs to lead to an 8-1 victory to split the doubleheader. McSpadden (9-2) suffered her second loss on the year.

West Chester traveled to the University of the Sciences of Philadelphia (10-23) on April 22 for a doubleheader. Murl continued her recent success and picked up the win on the mound in a 3-0 shutout for the Golden Rams. Anderson opened up the scoring for West Chester in the fourth with an RBI sacrifice fly, and Altenburger padded the lead in the seventh with a two RBI triple. The Golden Rams completed the sweep in game two with another shutout, and another win for Murl, in a 7-0 victory. Murl helped her own cause in the game, going 3-4 with a pair of RBIs. Murray and Quense each added two RBIs of their own in in the 7-0 victory. Murl moved to 13-6 on the year, and picked up her 40th career win in game two.

Senior Day for the Golden Rams was held on April 25 at home for a doubleheader against East Stroudsburg University (14-23). This year’s softball roster featured seven seniors: Jessica Schuck, JP Norris, Jillian Murray, Kim Murl, Kim Begley, Megan Kelly, and Kelly Anderson. Murl got the start for the Golden Rams and continued to stay hot. West Chester got out to a 5-0 lead behind a pair of RBIs by Schuck, and a solo home run by Quense. The lone run allowed by Murl in her complete game came in the seventh off a solo home run in the 5-1 victory in game one. The Golden Rams couldn’t ask for a better senior day, completing the sweep in game two with a 9-1 victory in six innings. Murl (15-6) picked up another win, and went 3-3 on the day with five RBIs including two home runs.

West Chester closed out the regular season on the road with a double header against Bloomsburg University (24-14, 16-9) on April 26. Bloomsburg got out to a 6-0 lead after four innings. The Golden Rams put one run on the board in the fifth off a Schuck RBI single, and two more in the sixth off of Altenburger and Norris RBIs. The Bloomsburg offense was too much to overcome as West Chester suffered the loss in game one 10-3. Murl and the Golden Rams had the chance to bounce right back in game two and they did just that. Behind a complete game shutout pitched by Murl, the Lady Rams split the doubleheader in the regular season finale with Bloomsburg with a 2-0 victory in game two.

With the win in game two of the doubleheader against Bloomsburg, West Chester clinched the PSAC East regular season title. The Golden Rams finished the season with a record of 34-17, and 19-9 in PSAC play. Behind the pitching duo of Murl and McSpadden, and the consistent offense of Norris, West Chester looks to continue its success in the opening round of the PSAC tournament on April 30.