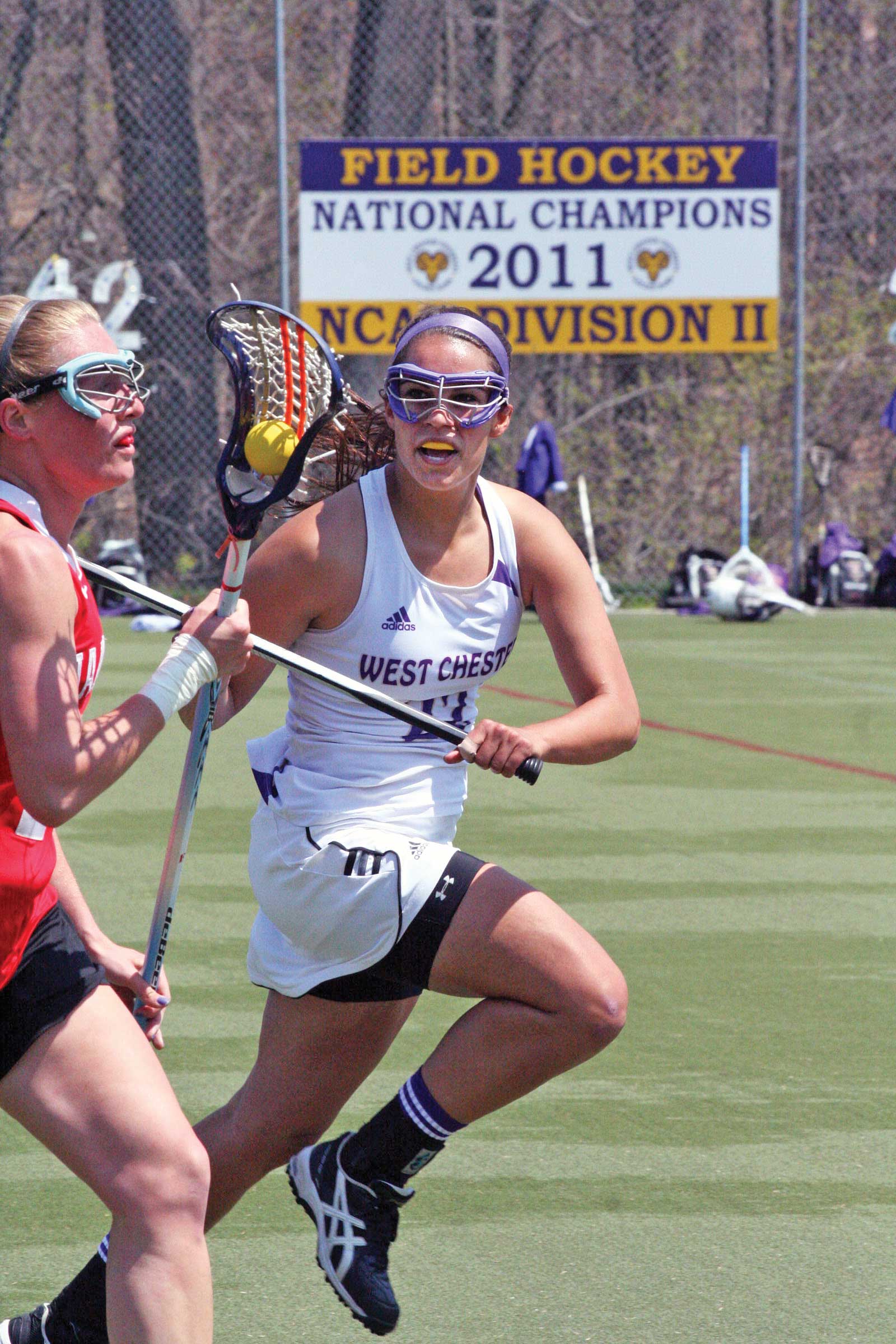 Hannah Cowan and the West Chester University women’s lacrosse team had an excellent two-week run, winning all four of their contests. The wins came against four tough PSAC opponents, Shippensburg University, Edinboro University, no. 7 ranked IUP  and East Stroudsburg University. Cowan continued her remarkable season dominating the offensive side of the game in all four matches.

First up for the Rams was a 7-5 Shippensburg team. The game was played on South Campus at Vonnie Gros field on April 15. West Chester scored 11 first half goals compared to Shippensburg’s three, and exploded for nine more in the second half. Cowan totaled four goals in the contest, but WCU was lead by sophomore Erin Scheno who notched five. The two dominated the Shippensburg defense and scored almost at will. The Rams controlled the shot total, nearly tripling Shippensburg’s total of 11 with 29. A big advantage for West Chester was the draw control, which helped the Rams dominate in time of possession. The final score of the game had West Chester on top, in a blowout win, 20-5.

Next up for the Golden Rams was Edinboro University. Much like Shippensburg, Edinboro has had an average season, posting a five hundred record. WCU’s command was also no different from the match against Shippensburg. Cowan attacked yet again, adding four more goals to her already impressive season total. Sophomore Erin Eckert matched Cowan with four goals of her own, while Scheno, junior Sarah Dennison and freshman Dina Cifeli added a pair of goals each. Cifeli also added three assists in the game, which she has found continued success in all season. Cifeli ranks among the top five in the country in Division II in assists. Through another impressive offensive showing, the Rams grabbed another win, 17-6 over Edinboro.

Next up was one of the toughest matchups that West Chester would be dealt all season. No. 7 ranked IUP has been on a tear, winning eight of their last nine games, and posting an 11-4 record (9-2 PSAC). Despite the success that IUP has recently had, the Rams would not back down. Cowan exploded for one of her strongest games of the season, notching seven goals along with freshman Kelsey Gumbert adding three of her own. Cifeli continued her unselfish play by assisting on four goals.

The game was a definite battle straight down to the wire. WCU trailed for almost all of the game until, with 16 minutes remaining, the Rams went on a run. Cowan and the offense would not give up, crawled their way back, and with 13 minutes left WCU grabbed their first lead, 13-12 on an Eckert goal. Cowan added another with seven minutes left to give West Chester a two goal lead, which proved to be the decider after a late IUP goal. West Chester prevailed in the back and forth game, grabbing a huge win, 14-13.

Cowan’s impressive performance did not go unnoticed, as she was named PSAC East women’s lacrosse athlete of the week. Cowan has scored an impressive 51 goals on the season in what has been a season of a lifetime for the Wilmington, Delaware native. Her leadership as a sophomore has shined and helped this team accomplish some key victories this season.

The final game in the two-week span for the Rams came against East Stroudsburg on a beautiful Saturday afternoon. Since it was the last home game for WCU, senior day festivities occurred in the pre-game ceremony, honoring seniors on their hard work on the field and off. West Chester honored six seniors, Dennison, goalkeeper Jess Henderson, Liz Wilson, Gina Eberwein, Julianne Williams, Melinda Speers and Jordan Heidelbaugh.

Saturday’s game was the last in the regular season, and resulted in the Rams on the winning end yet again, 8-3. Eberwein and Cifeli led WCU with two goals apiece, with Cifeli adding three more assists. WCU led the whole game and their lead was not closely tested after about 15 minutes into the first half. The win gave the Rams an 11-4 record (8-4 PSAC) with just one game remaining in the season.

As the regular season comes to a close, West Chester’s final record seems it will be enough to make the PSAC tournament. Despite a few tough losses, the Rams have accomplished quite a successful season. As we wait to see seeding’s for the PSAC and possibly national tournament, the Rams will continue to work hard and prepare to tackle whichever obstacle comes their way.