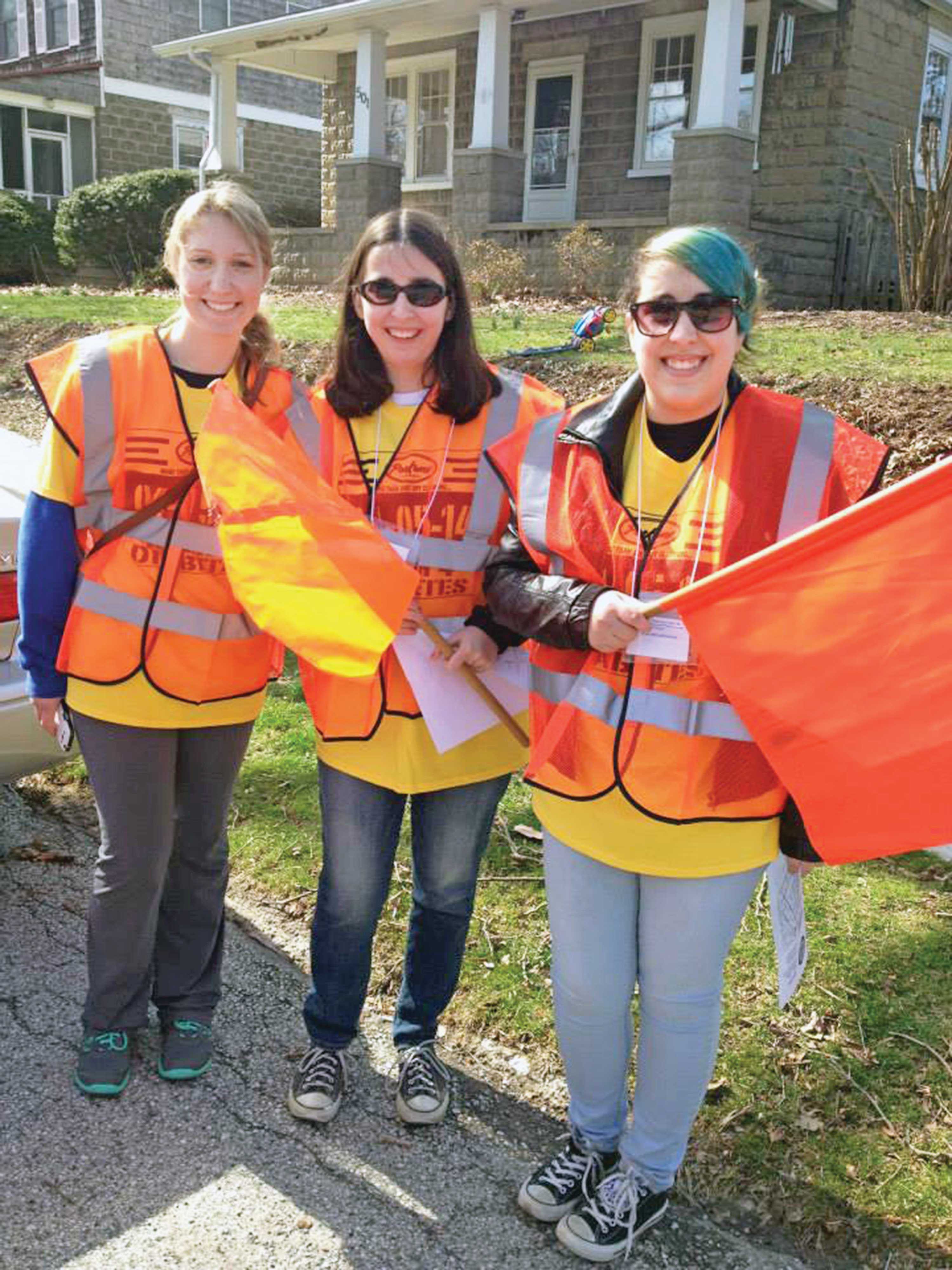 On April 6, students from the WCU Abbé Society and WCU Circle K volunteered at the Dash 4 Diabetes in town.   The annual dash involved a 5k competitive run, a 2.5k non-competitive walk, and a kids’ run. The Dash 4 Diabetes benefited the Diabetes Self-Management Program at Chester County Hospital.

The first through fifth place recipients in both the men’s and women’s divisions were awarded cash prizes.  The first place in each age division was also awarded a prize.

While running to raise awareness and money for diabetes is a worthy cause, not everyone is very athletic.  As a member of Circle K, I had a unique opportunity to volunteer as a road marshal, thus helping the cause without actually participating in the dash itself.  This provided an interesting perspective of the race.

Road marshaling is a fairly common volunteer job at charity runs, but this was the first time I had ever volunteered as one.   The “orange team” consisted of volunteers from the Abbé Society and Circle K. We were assigned a five-block radius and were given orange vests to wear, as well as flags and cones to make us stand out to incoming cars.

I was assigned to cover an alley. When the race began at 4 p.m., I stood in the middle of the alleyway, with the intent of blocking any cars that approached and directing them to turn around. Most road marshals were simply stopping cars until there was a break in runners and then they allowed the cars to cross the street.  No cars were allowed to turn onto the track.

I, on the other hand, had an alleyway that ended when it reached the course, so I had to tell cars to turn around in driveways and go another way.  While some drivers were frustrated at this diversion, most turned around before I even had to tell them to do so personally.  The moment they saw my flag pointing them in the opposite direction, they turned around in a driveway.  It was very helpful to all of the road marshals when drivers were understanding about the delay and responded kindly.

Overall, being a road marshal was a highly rewarding experience because it provided me both with a volunteer job and the ability to watch the race firsthand.

While I did have to keep an eye on the alley, I was also able to see the kids’ race, as many children – looking as young as age ten – ran the race.  Two young children, in particular, caught my eye, as the one girl slowed.  Her friend urged her to drink water and told her that she could keep running.  By urging each other to succeed, many of the young children who were running were able to complete the same race that some adults could not.

The adult runners had to complete two loops of the course. From my position at a little before the first mile marker, it only took seven minutes to see the first of the runners pass.  These were serious runners, complete with track shoes and running clothes.

As time passed, the walkers began to show up, and they walked on the left side while runners passed on the right, still trying to keep their speed up with the hopes of winning a prize.

Many of the runners were clearly friends with people who were walking, as some even had the same team shirts.  The walkers would cheer as their friends jogged by.  The walkers chatted with their friends, carried their kids on their shoulders, and enjoyed the experience of being out in the open air.

What was most interesting about the race was the wide variety of people in attendance. While children participated, there were also elderly people running in the race. Some mothers ran with their babies in strollers. Children walked with their parents.  Teenagers, who seemed dressed for a cross-country meet, ran passed me on their first loop of the race. The Parkway Dash 4 Diabetes clearly succeeded in bringing together people of all ages to promote a worthwhile cause.

With the weather getting better this spring, charity runs/walks are going to become more frequent; I encourage people to participate as often as they can.  With a small donation and a little bit of athletic ability, you could compete in a run.  Most runs are also walks, so that is another way to raise awareness. If you do not want to participate in the actual walk, then try volunteering to help run the event. Volunteering can be a very rewarding experience.  Road marshaling is not a difficult job, but it is very important to keep the course clear and the runners safe. I recommend volunteering at the next charity run that you hear about.

For more information about the run and the Chester County Hospital Foundation’s next major event, visit https://www.cchosp.com/cchfdn.asp?p=1188.