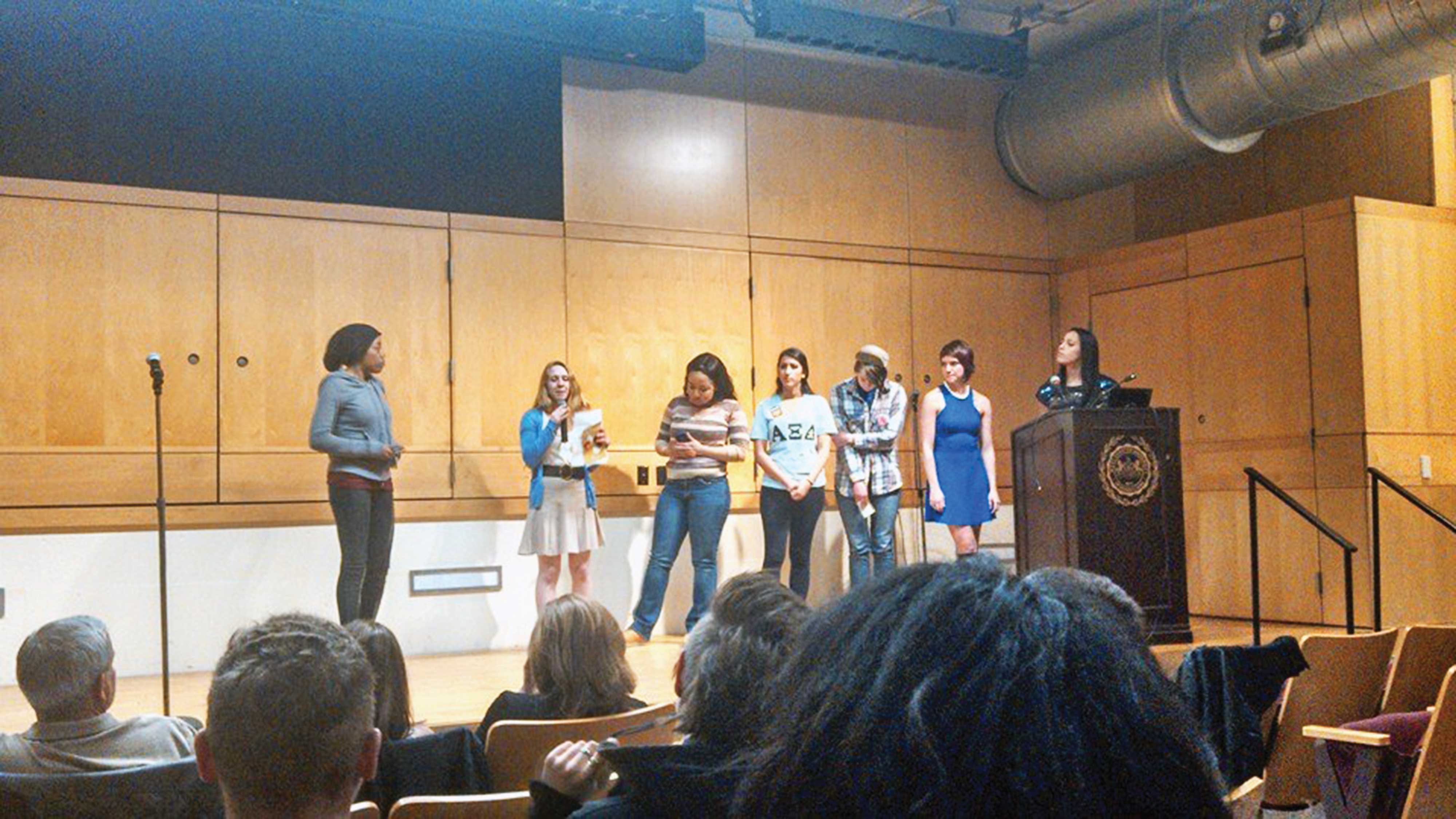 On Tuesday, April 8 the Student Activities Council – Contemporary Issues Subcommittee in partnership with the Women’s Center, sponsored the event entitled WCU Women Speak in the Sykes Student Union Theater. The performance allowed West Chester University women to express their experiences as women on campus, compelling their listeners to uphold and spread the notions of equality, and to advocate for women’s rights in a university setting. The show was compiled of six speakers who performed poems and various creative pieces that explored relationships, race, sexual orientation, body image, sexuality, and gender equity.

The program began at 7 p.m., spanning the length of one hour, and was hosted by WCU Weekly’s Paige Elliot. Elliot recited a poem to begin the night, joking with the audience that she lacked the creative talent of those acts to follow. Elliot interjected between performances to comment on each performance and to introduce the next speaker. She balanced perfectly between serious and comical performances, appropriately transitioning the audience to the next scene. After one particular performance that centered on “cat calling,” Elliot informally shared her own experience as a woman entering a field predominantly led by men – sports broadcasting. Having interned for a sports broadcasting company over the summer, she experienced similar harassment from employees as well as interviewees.

The first performer, Brittany Iatarola, performed her spoken word poem entitled “Innocent.” In this performance, Iatarola explored the difficulties of being stereotyped as an “innocent girl” from friends and family alike. She showed how limited such a word can be, and how reflective those actions can become. In this poem, the speaker’s acquaintances have blatantly excluded or isolated her from participating in various activities because of assumptions made about her. Even if included in such events, others in the poem would make the speaker feel that her participation was uncommon or strange, creating further isolation. Iatarola instead wishes to be seen as a person capable of deciding for herself what she can and cannot do, rather than labeled as something she does not feel and lumped into a category of prude “innocence.”

The second performer, Tiffany Hundley, recited a poem by Alysia Harris entitled “That Girl.” Harris performed the poem at the Philadelphia Regional Finals, recorded by HBO. Surprisingly, the fact that Hundley was performing Harris’ poem was never mentioned in the program or during her performance, so many in the audience remained either confused or ignorant to the this fact. The poem explores one woman’s struggle to distance herself from an ex-lover, with whom she assumedly has maintained a romantic relationship despite his new girlfriend. Harris explains her realization that her ex-lover was treating her without respect and as though she were worthless. In the words of Harris, he just wanted her to be “that girl,” “the one everyone wants to sleep with, but no one wants to be with.” She concludes the poem with the words: “I will never be ‘that girl.’” Hundley read the poem from her phone, and was welcomed by claps, snaps, and various forms of verbal encouragement from the audience.

The third speaker, Jahmai Risher, did not perform a poem per say, but rather recited some of her negative experiences as a West Indian woman from Barbados with ignorant people on West Chester’s campus. Her piece was entitled “Confessions of a Token West Indian Woman.” She detailed a few of the most trying encounters she has had and encouraged her audience to think twice before speaking and before assuming things about people of another culture.

The fourth speaker, Chelsea Leusner, recited her spoken poem entitled “A Song for the Time (Being Now).” Leusner spoke about not succumbing to the negative influences of society and encouraged her audience to seek self-definition and self-acclamation separate from a society which attempts to shape and form us.

The fifth speaker, Adessa Flack, performed her poem entitled “Walls,” which began with the speaker walking past a male counterpart on stage, the theatrics of which intentionally drew the audience into the reality of such a situation. The male on stage gawked at the speaker, cat calling her disrespectfully, and the speaker immediately lashes out with words every woman wishes she could say in such a situation; many are, however, silenced by society’s twisted standards for women, or from a lack of ability to adequately make a difference. Flack then turns to the audience and recites her poem which explores the “walls” she had put up after being sexually harassed on campus and not receiving the urgent help and support she needed from public safety. She also explored the guilt that was placed on her for her sexual harassment, over which she lacked any control whatsoever. Flack was received with warm regards from the audience which did not shy away from clapping and shouting during the performance and, at times, interrupting the speaker. One audience member and West Chester student, Marissa Koch, says: this performance in particular “really stayed with me because they touched on the subject of street harassment which I think is a really big issue here.” Fellow audience member and West Chester student, Brian Berry, agrees by stating: “Many of my closest friends who are women have countless stories of sexual harassment or even assault and I believe that gender equality is a major influence upon that fact.”

The sixth and final speaker of the night, Cynthia Jones, approached the stage with the utmost confidence. She performed her poem “What’s Privilege” in which she explains the various form of gender inequality that go unnoticed on a daily basis. She attempts to surface the word “feminist” and give it greater power. The speaker at one point implores of the audience why society and why this campus considers “feminist” to be a dirtier word than “slut,” to which the audience resounded with uproarious applause. Koch explains how significant this moment was for her as an audience member: “Although I personally don’t see ‘feminist’ as a bad word, I definitely see evidence of a negative cultural stigma against it. I think it’s important for people to see the harm against women words like ‘slut’ can create, especially because that word seems more readily acceptable in reference to women than does ‘feminist.’” Berry adds: “It’s important to increase awareness of the day to day oppressions of women in most facets of American life.”

The evening ended with each presenter once again stepping on stage as a collective group and individually reciting to the audience one message they hope the audience would carry with them after the program. The event ended around 8 p.m.

Laura Wayne is a fourth-year student majoring in English literature with minors in international business, business and technical writing, and Spanish. She can be reached at LW738484@wcupa.edu.