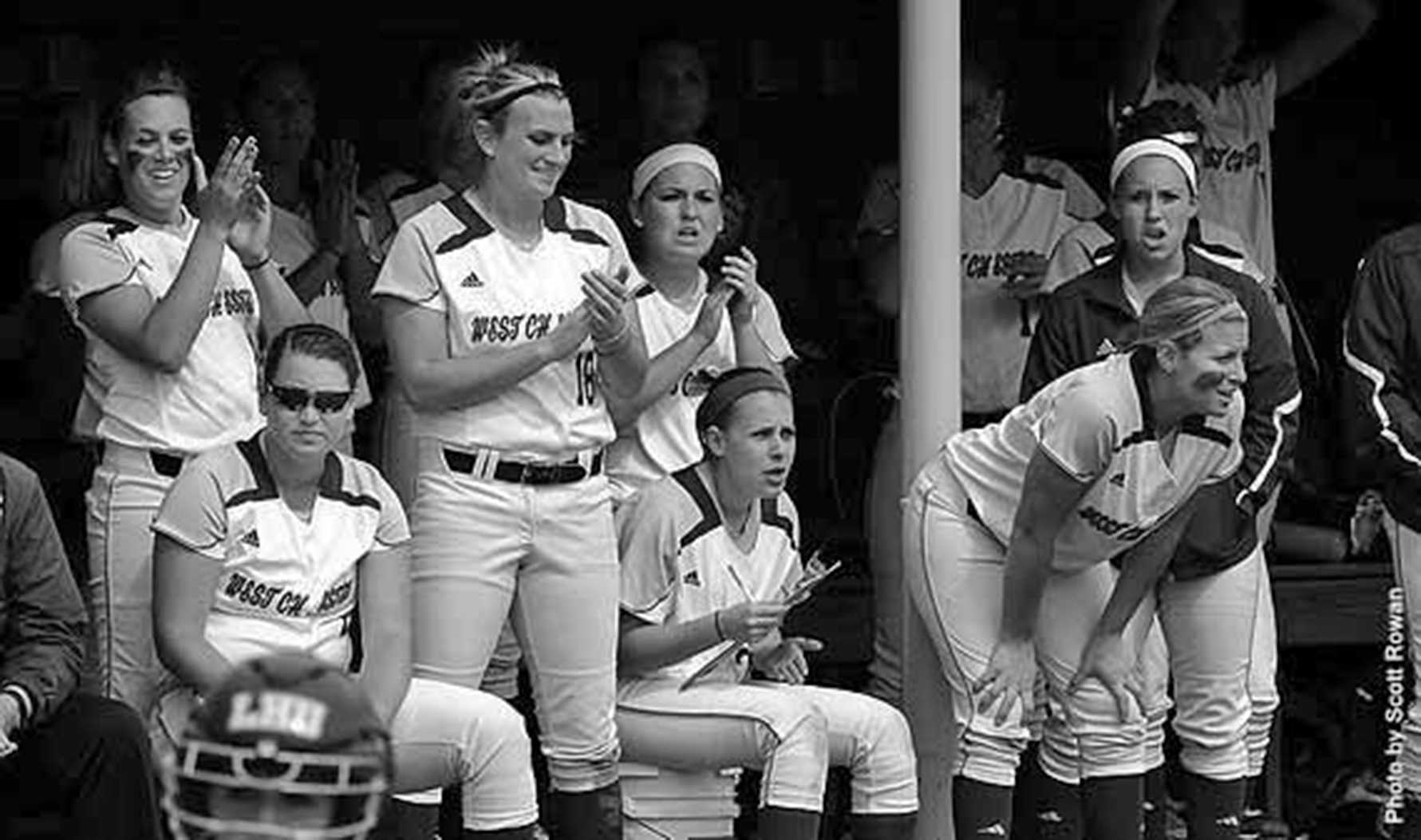 West Chester University softball team capped off an up and down 13-game stretch in the past two weeks, including nine games in Clermont, Fla., by splitting the doubleheader against Kutztown on Thursday.

The Golden Rams(6-4) started their nine-game road trip on Friday, March 14th against Northwood University of Michigan(9-6). Behind a complete game for pitcher Kim Murl, who improved to 2-1 on the year, WCU was able to defeat Northwood by a final score of 2-1, despite only managing a pair of hits, both by J.P Norris, who was coming off a week where she was named PSAC East Player of the Week.

Down 1-0 in the top of the sixth inning, Megan Kelly drew a bases-loaded walk and Murl added to her performance with some offense of her own, batting in Sarah Walasavage on a ground out for the game-winning run.

The bats came alive for the Lady Rams later that evening in a dominant 10-0 six-inning win over New York Tech(0-1). Micaela McSpadden improved to 4-0 on the year after picking up the win in the circle, allowing five hits and zero runs in four innings. Katie Erb closed out the game for the Rams, allowing one hit. Jillian Murray started off the scoring in the second inning with a two RBI double, and the Golden Rams never looked back from there.

Hayley Bollinger finished the game off in the sixth with a three-run homerun, putting West Chester up 10-0, ending the game due to the eight-run rule. The Golden Rams improved to 8-4 on the year.

West Chester kept the momentum going the following day on March 15, with a pair of wins against Merrimack and Saint Michael’s College. The bats stayed hot early for the Golden Rams, getting out to a 5-0 lead over Merrimack in the fourth, before eventually winning the game 7-4 behind the starting pitching performance of Murl, who improved to 3-1 on the year.

In the second game of the day, the Lady Rams’ bats exploded for a 19-1 win in five innings over Saint Michaels. West Chester scored 10 runs in the first, behind four RBIs for Jessica Shuck, including a two-run homerun and a two-RBI triple. Megan Kelly added three RBIs for the Lady Rams, and McSpadden and Kelly Anderson each added two RBIs of their own to help balance out the offense in the impressive win for West Chester. Sara O’Dell picked up the win in the circle. The Golden Rams moved to 10-4 on the year after the pair of victories over Merrimack and Saint Michaels.

After starting the Florida trip out 4-0, the Golden Rams suffered their first loss of the trip on March 17 to the University of Sioux Falls. After falling behind 5-0 after five innings, the Golden Rams attempted a comeback, scoring two runs in each of the final two innings, including a two-run home-run by Kelly in the seventh. The four runs were not enough to overcome a strong Sioux Falls team, and the Lady Rams lost by a final score of 5-4. Kim Murl picked up the loss for West Chester.

The Golden Rams continued to struggle in a pair of games on March 18, losing both of their games to Saint Leo University and Minnesota State University. After getting off to a great start in Florida, the West Chester offense was held to just one hit by a trio of Saint Leo pitchers. Erb suffered the loss for the Rams, allowing four runs and seven hits in three innings, and the Golden Rams went on the lose by a final score of 7-0.

In the second game, West Chester suffered a heartbreaking loss to Minnesota State, when Erb gave up a walk-off home run in the bottom of the seventh inning in her complete game. Ali Vavala had the lone run for the Golden Rams in the 2-1 loss. West Chester moved to 10-7 on the year.

West Chester closed out its Florida trip during spring break by splitting a pair of games with the University of Illinois Springfield and University of Minnesota, Crookston on March 19. The losing streak continued in the first game against Illinois-Springfield with the Golden Rams falling 11-4. West Chester dug themselves in an 8-0 hole after three innings, and it was too much to overcome after a trio of pitching from Murl, Erb, and McSpadden struggled with Erb picking up the loss and moving to 2-4 on the year.

Coming off a four-game losing streak, the Golden Rams needed to finish their Florida trip on a high note, and they did just that, closing their trip out with a 9-0 win over Minnesota-Crookston later that day. McSpadden pitched a stellar three-hit complete game, improving to 5-0 on the year. West Chester closed out its Florida trip with a record of 11-8 on the year.

West Chester(11-8) opened its PSAC play at home with a doubleheader against Lock Haven University(5-10) on March 22. In the first game, Murray blasted a pinch-hit, walk-off, three-run homer to lift the Golden Rams to a 4-2 victory.

McSpadden picked up the win in relief to go 6-0 on the year. In the second game of the double header, West Chester got out to a 4-2 lead after four innings, but Lock Haven came back with four runs in the fifth and handed WCU a 6-4 loss.

West Chester(12-9, 1-1) played its second pair of PSAC games with a doubleheader on the road at Kutztown(6-11, 0-0) on March 27. Trailing 2-0 in the fourth inning of the first game, Norris hit a solo homerun to cut the lead in half, and West Chester went on to score four runs in the fifth, behind an RBI double by Erin Quense.

Erb pitched five innings of scoreless relief and picked up the win in the 5-2 victory in the first game. In the second game of the doubleheader, Kutztown scored two runs in the bottom of the fifth, bringing the game to a 2-2, and that’s the way things stayed until West Chester scored in the top of tenth.

Kutztown tied the game in the bottom of the tenth off a catcher’s interference and won on a bases-loaded walk-off single to top West Chester 4-3. Erb suffered the loss in relief for the Golden Rams, who moved to 13-10 overall and 2-2 in PSAC play on the year. Saturday’s doubleheader at home against Philadelphia University was postponed, so that West Chester can make up its conference doubleheader, and no make-up date has been announced.

West Chester looks to get some sort of consistency going into the upcoming games, after the stretch of 13 games which featured a four-game winning streak and a four-game losing streak.

WCU is 10-1 on the year when they score five or more runs, and McSpadden is a perfect 6-0 on the mound.