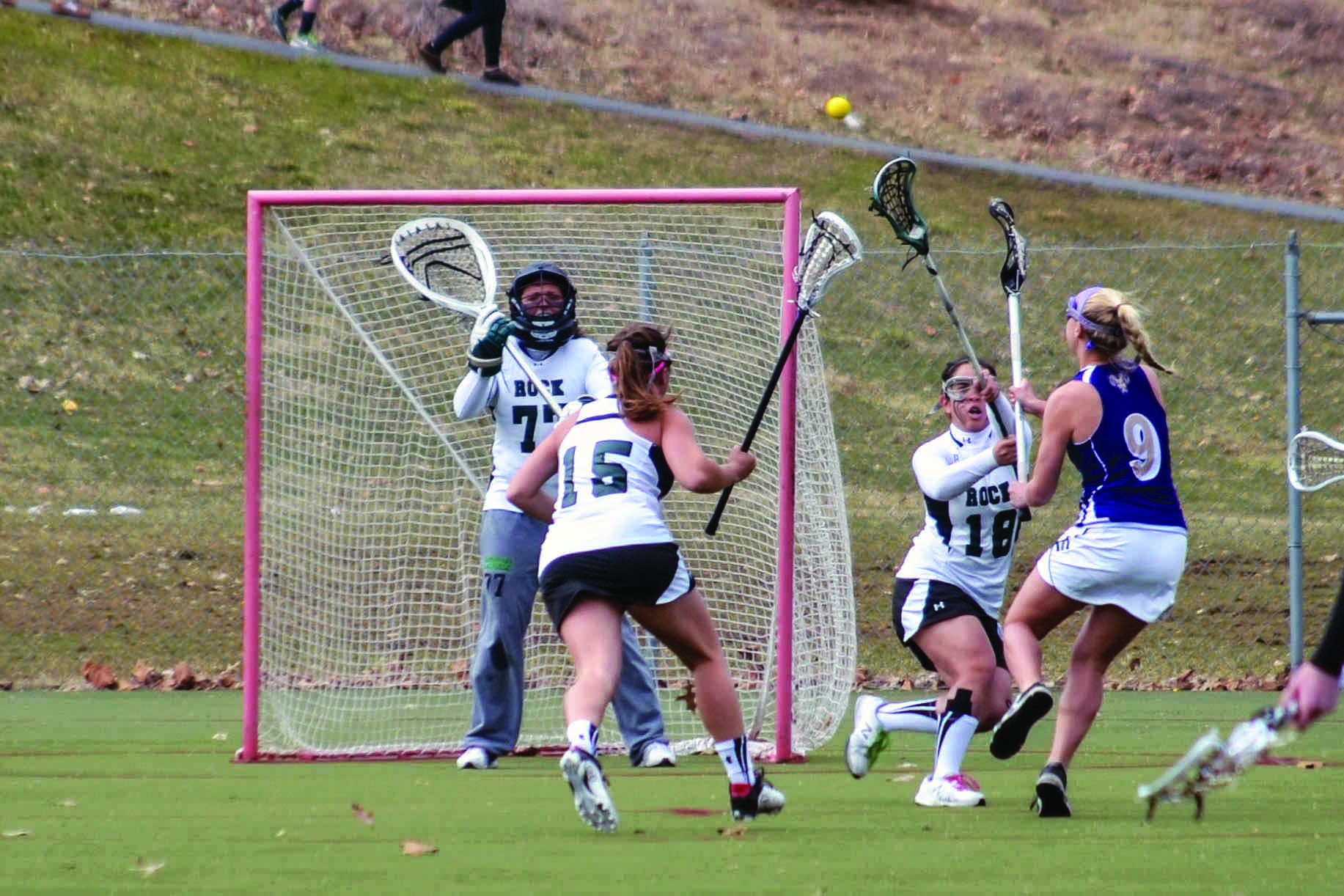 The West Chester University women’s lacrosse team entered the season ranked No. 7 in the country this season and second in the PSAC conference after an impressive 2013 campaign. The Rams finished the 2013 season 15-4 (10-1 PSAC) and a PSAC championship after defeating nationally ranked Lock Haven. WCU looked to continue their 2013 success into the 2014 season as they began on March 16 at Queens College in Charlotte, N.C.

In their season opener, the Rams came from behind to defeat No. 12 ranked Queens College 6-5. Freshman Olivia Martin scored three goals for the Golden Rams in the victory, all coming in just a four-minute span.

Sophomore Hannah Cowan scored with five minutes remaining in the contest to give the Rams the lead, but Queens College quickly struck back to tie the game 5-5. Cowan found the back of the cage again with only 45 seconds left to give WCU a 6-5 lead and an opening-day win.  Senior goalkeeper Jess Henderson made 10 saves in the win.

WCU did not have to wait long to return to the field. The next day, the Rams faced off with Newberry College in Newberry, S.C. The Rams dominated this game by a score of 18-5.Junior Sarah Dennison scored five goals and added an assist in the dominant victory for WCU.

Senior Jordan Heidelbaugh registered three goals in the win while Ashley Pyle, Erin Eckert, and Martin each added their own two goals. The game began with a 1-1 tie, but the Rams exploded with seven straight goals to take control and never look back.

After the impressive spring break road trip in the Carolinas, the Rams returned home for their home opener on March 20 against Saint Thomas Aquinas College. The Rams came out slow, surrendering three early goals and falling behind 3-2.

WCU battled back though and controlled the rest of first half, holding a 7-3 lead at the midway mark. Nine second-half goals gave West Chester the lead they were looking for and eventually the win. Freshman Dina Cifelli netted two goals and assisted five others for a game-high seven points. Dennison was impressive yet again, adding six goals for the Rams.

After three non-conference games, West Chester finally opened up in PSAC play against the Bloomsburg Huskies in Bloomsburg, Pa.  Unfortunately, the strong play of West Chester was not enough to hold off BU, as the Rams fell for the first time in the 2014 season, 15-14. WCU exploded out of the gates, taking an early 6-1, but Bloomsburg fired right back.

West Chester continued to fight, taking a 12-10 lead in the second half, but the Huskies bounced back yet again, tying the game at 12 with 10 minutes remaining.  Bloomsburg went on a three-goal run, and WCU never recovered, falling for the first time this season, 15-14. Cowan, Dennison, Heidelbaugh, and freshman Kelsey Gumbert each added two goals in the loss for the Rams.

WCU ventured to Kutztown University on Tue., March 25 to face off with the struggling Kutztown Golden Bears. After a tough PSAC loss in Bloomsburg, the Rams looked to recover and get back on track in the Tuesday afternoon contest.

Cifelli posted another excellent performance for the Rams adding 10 points on two goals and eight assists in a 22-3 dominant win for West Chester. Heidelbaugh, Cowan, and sophomore Erin Scheno each added three goals while Eckert and Gumbert added two a piece. Henderson made five saves in net and freshman Courtney O’Connell made her first collegiate appearance in the last 10 minutes, recorded one save and allowing one goal.

Lax4Life is a national campaign to help raise awareness and support for child and young-adult suicide prevention, West Chester University is lucky enough to host the fundraiser this season for the PSAC conference.

Friday’s game against Slippery Rock was a close contest, with WCU finding the winning end 10-8. Cowan scored five goals while Eckert added four to lead the Rams to Victory. The Rams forced 21 first-half turnovers to control the defense side of the game, which helped control the game. The 10-8 victory was a good start to a four-game home stand for the Rams, who faced off the next day against Mercyhurst University.

WCU faced off against Mercyhurst on a rainy Saturday afternoon, in a down-to-the wire game, which resulted in the second loss for the Rams this season, 11-10. Mercyhurst’s Regan Kaestner found the cage with 19 seconds left in OT to seal the late victory for Mercyhurst.

Cowan recovered a loose ball with seconds remaining, but a last-second attempt was blocked by Mercyhurst goalie Rebecca Muscella to secure the win for the Lakers. Cowan registered another six goals, giving her 11 goals in the past two games. Cifelli also registered seven more points to add to her impressive point total on the season. The loss sits the Rams at 5-2 on the season and 2-2 in the PSAC.

West Chester does not have to wait long to get back into action. Tuesday, the Rams will face off with PSAC rivals Millersville University at Vonnie Gros field, and Friday against PSAC powerhouse Lock Haven University. The Rams will look to bounce back from the tough overtime loss and continue to build on what is already, yet another successful season in the making.