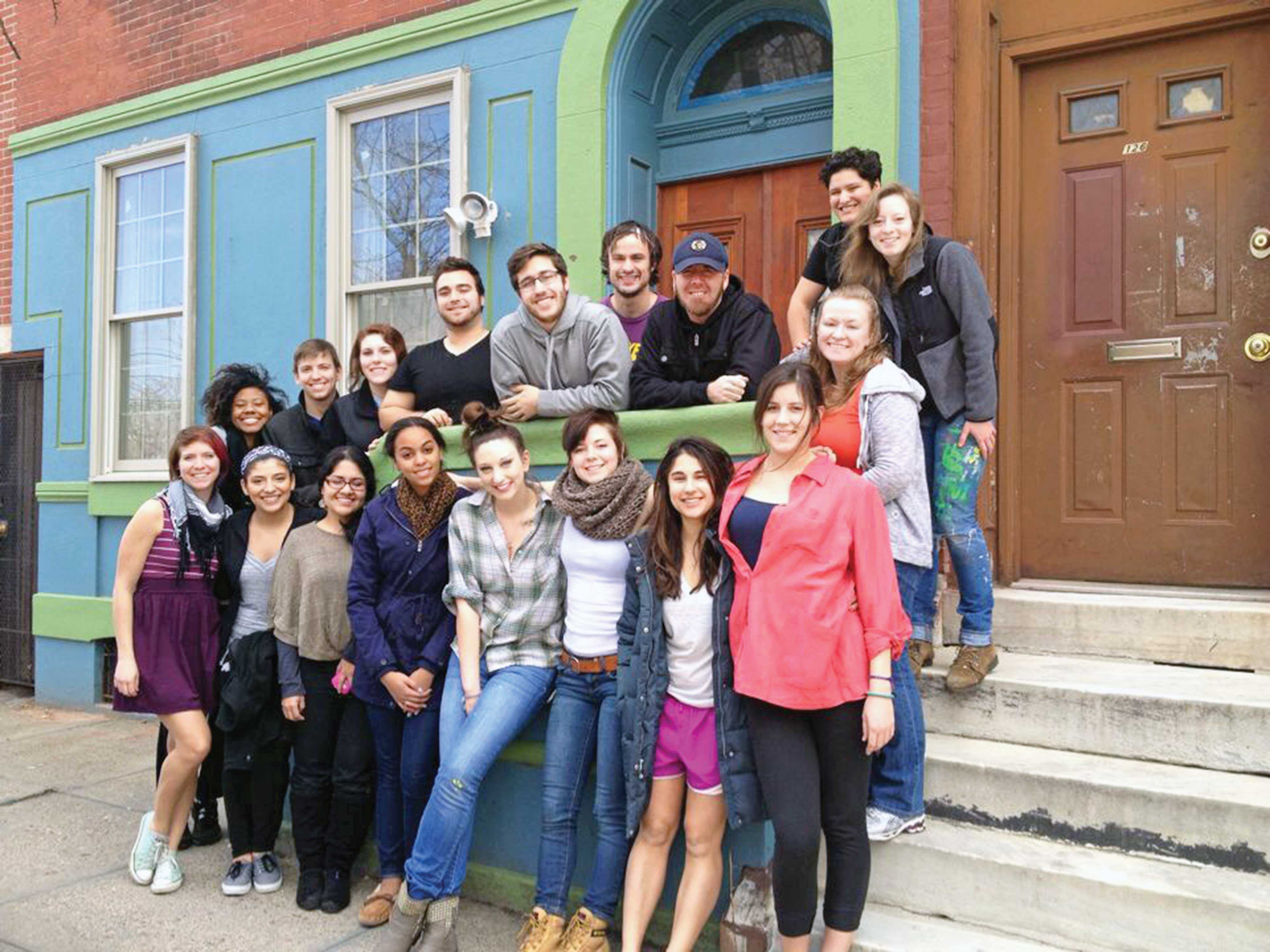 Carefully, silence settled into a symphony of slumber on Diamond Street.  Softly, day one concluded as evening wained on the three-story brownstone home in Northeast Philadelphia.  The walls creaked with the cold. After a day of calm introductions, mother nature promised to play with winter’s wonder, but little did she know that spring had sprung in the hearts of 15 West Chester University students.

Only hours before the cold had broken,  a car packed full of students and collaborators reached the neighboring metropolitan city of Philadelphia. Possessions and the excitement of years of planning were stuffed into three separate vehicles.  All aspects of the trip seemed to effortlessly coalesce on the sunny Saturday morning.

The spring of 2014 is a time for flourishing. West Chester is a university experiencing exponential growth – from a satellite campus to a diversified student body- and this spring will prove the observable. In March, students and staff from West Chester University co-collaborated with community members in Philadelphia, and all participated in the first annual Alternative Spring Break Program.

Connecting the campus to the community, West Chester University co-operated with BreakAway. The growing organization provides an adaptable model sweeping across the nation and the globe- on a mission to inspire lifelong active citizenship.  Trained by the BreakAway model, Scholars in Service on the campus of West Chester began to formulate Alternative Spring Breaks.  After a training in the fall, A Seed on Diamond Street Alternative Spring Break was officially planted.

Growing in the soil of past collaborative projects and cross-discipline relationships, the alternative spring break was sponsored by the WCU Office of Service Learning and Volunteer Programs, and began to grow.

Allies aligned from the Political Science and Social Work Department.  Dr. Linda Stevenson and Dr. Travis Ingersoll were the faculty who led the project.  Meghan Cox and Marcie Cohen were selected as the undergraduate and graduate student leaders.  In the fall, organizers sought a clear concept for the alternative break.

Today, the “Seed on Diamond Street” is an opportunity for motivated West Chester University students (both graduate and undergraduate) to adopt a vision of the Semilla Arts Initiative. Semilla meaning seed in Spanish is a grassroots movement founded by Philadelphia mural artist Ms. Betsy Casañas.  The Semilla Arts Initiative uses art as a catalyst for social change.  Embodying the Telos of a seed, the Arts Initiative is grounded in artistic collaborations as a means of empowering individuals and growing communities.

The mission of the alternative spring break is to work in solidarity with diverse communities. For one week, direct service provided cross-cultural experiences and exposure to the power and influence of public art, and the basics of community building- all striving towards active citizenship.

On March 15, 15 West Chester University students departed with staff to engage the program and further begin to grow the “Seed on Diamond Street.” Starting to galvanize active citizens for one week, students were encouraged to paint, plant, and participate!

The group found home in the residence and art gallery of Ms. Betsy Casañas,  situated within the Norris Square neighborhood in North Philadelphia.  The home and its location proved a reich insight for student to begin to understand Latino Philly and Philadelphia’s living history.

After laying some roots, students began to branch out. Engaging two of the eight components of the alternative spring break: service and reflection.

Each day, the students and staff participated in one of seven different service projects.

The first, and the largest of the several moving parts within the project was the opportunity to paint a mural with Pennsylvania Academy of the Fine Arts (PAFA) graduate Ms. Sandra Gonzalez.  Ms. Gonzalez’s mission is to curate six murals in the halls of Isaac Sheppard Elementary School off of Cambria Street in North Philadelphia.

Another project was with local artist and illustrator Stephen Haigh who employed several students to prepare a spring gallery in the home of Ms. Casañas.  Students painted the walls of the gallery, moved, and installed various pieces.

Working in solidarity (and around the weather), students participated in urban gardening.  Ms. Candida Casañas, Betsy’s mother, recruited students and staff to clean and prepare the Semilla Arts Initiative Children’s Garden for spring.  Situated in the heart of “Latino Philly” the urban garden was exposed to the elements of city-life and the harsh winter.  Students cleaned and cleared the garden for the spring – more planting will occur next month.

Other students found their service through ulterior organizations.  The “Seed on Diamond Street”  collaborated with a Philadelphia charter school and The Department of Making and Doing.

In addition to daily service projects, each student, staff, and collaborator participated in a series of evening reflections. Reflections were student-led guided by Cohen and Cox.  Participants reflected on their experiences and welcomed a series of guest speakers.  Other activities included a poetry reading, meeting and conversing with local artists, and dancing.

The week on Diamond Street flew by, but through solidarity in service, evening reflection, and the communal living style, family was established and the seeds of change began to grow in the grassroots of a community.  Before retiring for the evening on that first cool night, I thought to myself: “Never doubt that a small group of thoughtful, committed citizens can change the world; indeed, it’s the only thing that ever has,” words spoken by Margaret Mead.  As the spring begins to blossom I encourage one and all to seek seeds of change and inspire the community in which to flourish.

If you would like to grow with us and the Seed on Diamond Street program please consider attending this year’s Alternative Spring Break Showcase Thursday, April 17th 4-6pm in Sykes Ballroom C

Meghan is a fourth-year student majoring in liberal studies with minors in philosophy and political science. She can be reached at MC737693@wcupa.edu.

Meghan Cox is a fourth-year student majoring in liberal studies with minors in philosophy and political science. She can be reached at MC737693@wcupa.edu.