The Districts embark on career-launching tour 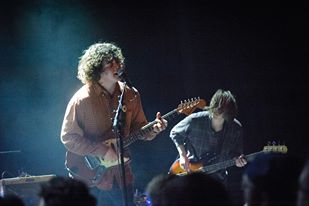 Rising indie-folk band The Districts have been traveling the country touring and performing alongside sold out acts such as Dr. Dog and White Denim. Fresh out of high school from Lititz, Pennsylvania, the quartet had an exciting 2013 when they were newly signed to Fat Possum’s records, the same label that jumpstarted garage rock duo The Black Keys and alternative rock bunch, Band of Horses.

On Feb. 27, The Districts played Philadelphia’s Union Transfer, setting the place off with their scrappy, southern blues opener “Rocking Chair,” the same track that opens their self-titled EP. The song sparked a universal validity that The Districts were the genuine, real deal. Lead singer and guitarist Rob Grote spoke on the newly emerged tour, “It’s been a week and a half at least. It’s pretty nice. We just started doing vocal warm ups to help our singing voices every morning.” While the line up is certainly having the time of their lives embracing the odyssey of the road, they weren’t hesitant on speaking about the trails and tribulations of touring. The group sarcastically added, “We got to walk around New Orleans without our coats on!” Grote elaborated, “In Birmingham, Alabama we were sleeping in these trailers behind the venue. During the show, these crazy storms started and they [White Denim] ended up finishing before we slept out there, but we were kind of just under a tin roof. Guitarist Mark Larson replied, “The only hard part is late-nights and early mornings, and long car drives, but other then that, it’s just like hanging out.”

“Funeral Beds,” a yearning harmonica-guided song with a slow and unfluctuating build up in which Grote wholeheartedly expels, “Oh my Savannah, did it have to be so hard? Oh my Savannah, taking all my love and all my heart” was a viral hit among Redditors that quickly launched the band towards stardom. “It usually beings with a song being written acoustically that’s half finished, although it depends whether the music or lyrics came first. It’s usually three quarters of the way formulated and then we get together and thaw it out and figure out the dynamics of it,” Grote made clear when asked about the songwriting process and what personal sediments the music and lyrics are tapping into. “Reflections on experiences. I said that the other day and thought it was an accurate description. Things or conversations that make their way into something that impact me.”

The band has no shortage of influences, all off which subtly bleed into their exclusive sound. “For the past six months, I’ve been listening to Leonhard Cohen. He’s a big influence,” Grote says. Larson jumped in stating, “We like Tom Waits a lot and we’re all big Strokes fans.” “And Neil Young,” bass player Connor Jacobus and drummer Braden Lawrence chimed in.

The biggest obstacle at the bands feet now is where to go from here. “I think it’s definitely harder to be really popular, but I think you shoot more for being big in your scene. The label distributes your music and sees how far they can take you, And if people accept you, good for you. And if not, the label does what they have to,” said Larson. “The goal right now is to make the worst shows better and the best shows even better.” Nevertheless, the band is absolutely thrilled to apart of the Fat Possum label. “I mean Possums putting it, like, everywhere. We used to do it with CD Baby and we’d pay extra for iTunes and stuff, but other then that, the only places we use to have the CD for sale is at our shows when we brought them. But now Fat Possum puts them in record stores and we could never afford anything like vinyl before. It takes a big weight off us and makes it easier to get it out there.”

Brimming with the stage presence of seasoned instrumentalist, The Districts’ prompt a charm that is incontestable. From Grote’s untamed shifting, guttural shouts to the bands revved-up peaks and drops, the group plays together as if they’ve been collaborating for decades. Speaking on the tour, Grote commented, “What we’re in the midst of right now, is we played D.C. …Then we had two nights off. Then back here in Philly and then we drove up to Boston for two nights, now we’re back here in Philly and going to New York tomorrow….then Vermont. So it’s like up north back down and up north again.” Larson wouldn’t have it any other way. The group has set school to the side at this point to watch their music dreams unravel  “It definitely beats sitting behind the desk everyday.” Larson explained, “Right now we get to see the entire country and we’re meeting lots of people.” Grote smirked and humorously added, “If we can do that, we’re probably not going to choose something else.”

The remaining tour dates for The Districts go until Apr. 3, with their final show taking place at Lancaster’s The Chameleon Club.

Rob Gabe is a third-year student majoring in communication studies. He can be reached at RG770214@wcupa.edu.