Comments from the Mayor’s office 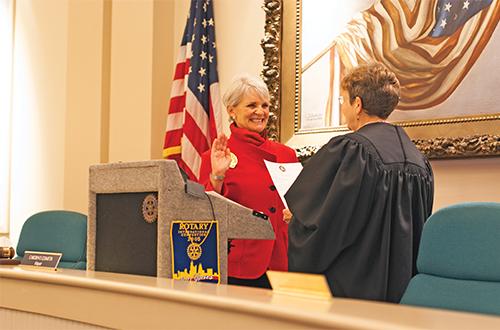 While we were off enjoying our five-week winter break, Mayor Comitta and the town of West Chester continued their mission to protect and serve our community.  Jan. 6th, Mayor Comitta took the oath to serve as Mayor for her second term.  She will serve for the next four years.  The seven Borough Council members also took their oaths to serve the seven voting wards in the Borough.  The Council has three new members: Brian Abbott, Donald Braceland, and Ellen B. Koopman.  The Council is also eager to announce their new President Jordan C. Norley and Vice President Stephen A. Shinn.

Borough Council is West Chester’s legislative body which passes laws, sets policy and drafts and oversees the budget.  During her inaugural address Mayor Comitta asked, “Who is at the top of local, state and national government?” One would probably believe the President, or the Mayor but Mayor Comitta informed us that it is us the citizens.  The citizen’s job is the most important because we must be engaged in voting and electing our government representatives and working with one another to better our community.

The Mayor and Council invite YOU and every WCU student to attend Borough Council meetings.  The meetings are held at West Chester Borough Hall (where the police station is located).  The schedule can be found at www.west-chester.com  .  We are key members of the Borough and our ideas and input are valuable to making decisions that are best for the West Chester community.  I hope to see you at the next Borough Council meeting!