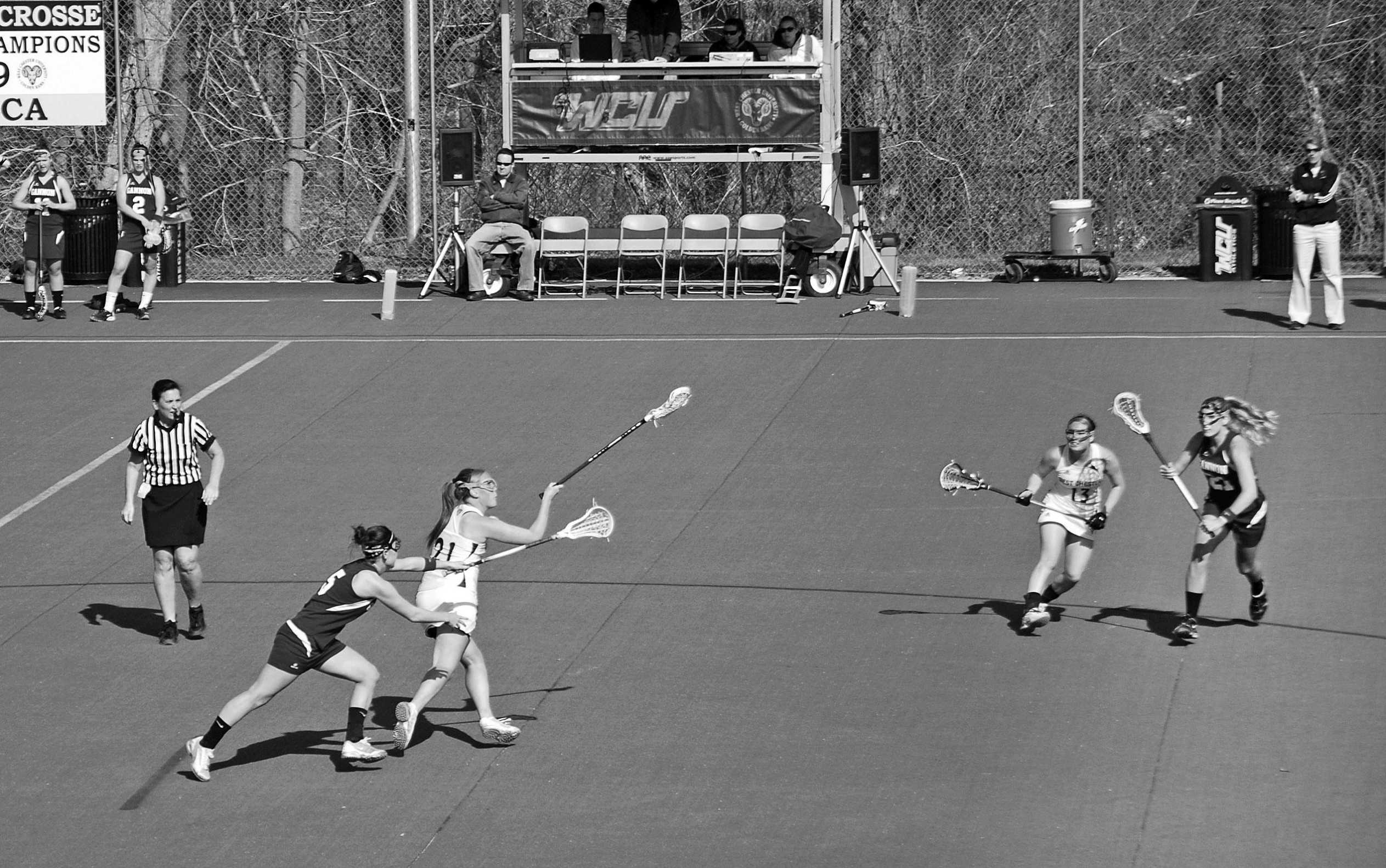 West Chester’s women’s lacrosse team had a tall order this past weekend, having to travel to IUP and Lock Haven, the two teams tied with West Chester for first place in the PSAC.  IUP is 8-0 in the PSAC and 11-0 overall.

Last season, the Rams took care of the Crimson Hawks with a convincing 23-8 victory.

This season was no different as the Rams handed IUP their first loss of the season, with a convincing win 15-8, giving them sole possession of first place for the time being.

The game was tied 3-3 20 minutes into the game, but West Chester ripped off four straight goals in five minutes to give them a 7-3 edge.

Theresa Giunta scored her 16th goal of the season followed by a goal by Caroline Kuchinsky.  Glassey tacked on two of her own before IUP was able to add another one, making it a 7-4 game. However, Dugan stopped IUP’s momentum by scoring with only 16 ticks remaining on the first half clock, giving the Rams an 8-4 edge heading into the locker room.

There was no turning back at that point for the Rams, knowing the importance of this game, they kept the pressure on and scored the first four goals of the second half.  Saraj Dennison scored two in a row to open up the half extending the lead to 10-4 and giving the Rams a firm grasp on the game.  Tori Dugan assisted the next two goals, one scored by Jamie Dolan and the other by Nicole Pyle.

The Crimson Hawks scored two quick goals in a row, but it was too little, too late as the Rams were in full control of the game.  Dolan and Glassey converted in man-up situations, putting one last postmark on the game. The final score was 15-8, a convincing and vital victory for West Chester.

The Rams outshot their opponents 23-20 and Jess Henderson made seven saves on the day.

Earlier in the week, the Rams defeated visiting Slippery Rock an overwhelming 21-4 keeping them a perfect 7-0 in the PSAC. It was an important day for the program as 10 seniors were honored on Senior Day for their time and effort given to the team during their careers at West Chester.  All 10 seniors started to commemorate the special day, and senior Jacquie Burke shined, scoring four goals on the day.  Lauren Glassey also scored four goals of her own and co-captain Tori Dugan had quite the game, recording three goals and six assists. 17 of the 21 goals were recorded by the seniors, a seemingly perfect game for the girls, especially after being handed their first defeat of the season the game before.

Following the victory against Slippery Rock, West Chester had to prepare for the toughest three-game stretch of the season.  All three games on the road, the Rams were set to travel to No. 1 ranked LIU-Post, followed by matchups with first place IUP and Lock Haven, the only other two undefeated teams in the PSAC.

The game against LIU-Post marked a rematch of last year’s national championship, where LIU handed West Chester a crushing 17-16 defeat.  The first matchup this season proved the similar results from the national championship, with LIU defeating the Golden Rams 17-8.  This was the Rams’ second loss of the season, but one that will certainly be turned into motivation for the remainder of the season.

Following the Lock Haven game, West Chester will have three games remaining before the PSAC tournament.  Kutztown will be the last regular season on game of the season, followed by another road trip for the Rams’ first to Syracuse, NY to take on Le Moyne College, and continued out to Edinboro for the final regular season of the game.