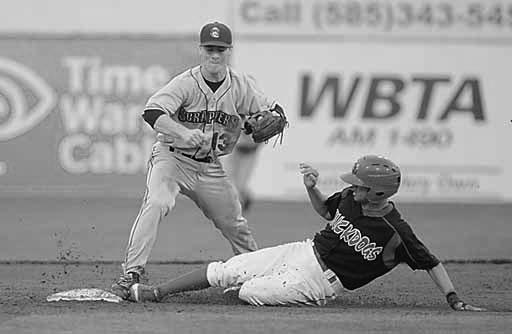 Last week, Joe Wendle, alum of the Golden Rams’ 2012 Division II Champion baseball team, was in town to play second base for the Carolina Mudcats (a Cleveland Indians minor league affiliate) as they took on the Wilmington Blue Rocks. The Quad caught Joe on the phone to hear about his experiences since signing with the Cleveland Indians last summer.

Q: Since when have you been with the Mudcats?

A: The last day of March. I’ve been playing with them for about two weeks now.

Q: Has the learning curve been pretty steep over the last three-fourths of the year, or has it been not so bad?

A: A little bit of both. As far as the lifestyle goes-playing seven days a week, being on the road, being away from your family, learning how to get yourself ready for a game every single day-that’s a steep learning curve. And playing is also, but I think playing for the summer leagues that I did in college did a really good job of preparing me-swinging a wood bat in those leagues was very helpful. So, yeah, there’s a very steep learning curve, but a lot of people are going through it at the same time, so it makes it easier.

Q: Playing so close to West Chester, you had a lot of friends and fans in the audience. How was that?

A: It was a lot of fun. I wish we would have been able to win a couple games for them. I saw people I hadn’t seen in years-people from my high school, people from my hometown, people from college, people from all over-and it was really good just to say “hi” to them and to see them, even if it’s just for a couple seconds. It’s awesome to have such a support system, to have so many people who are following you and care what you’re doing. It’s meant a lot for me to see that, to see all those people there.

Q: Is there any way in particular that your game has improved since last spring?

A: I really focused on my arm strength, throwing-wise, and also my speed. I thought those were two areas that I needed to focus on in the off-season. So, I like to think that I improved in both of those.

Q: Are there any cool perks to playing in the minor leagues that you’ve come across?

A: Cool perks…let me think. Well, I like the fact that you can get your bats for free. That’s one thing. I enjoy just playing, the fact that you get to play every day. Sometimes, baseball people talk about it being a grind or something like that, but any time you get to come out and play a game every day of your life is really not a grind. I’m just thankful for every opportunity that I get and I look forward to doing what I do every day.

Q: Do you really play seven days a week?

A: Yeah, we play seven days a week. We play a 140-game schedule in about 150 days, so we get about 10 off days throughout the course of the season. Right now, we’re in the middle of a 24-game stretch without an off day, so we do get off days, but maybe once every other week or so.

Q: Wow. I’m guessing that you would get tired physically, but I guess maybe if you’re not playing the same amount every game…

A: Well, the thing is, it’s baseball, so not to say that it’s not physically taxing on you…but if it was a game like football, obviously we wouldn’t be able to do it every day. It’s very important to take care of your body, make sure you’re keeping up with your lifts, make sure you’re eating well, staying hydrated, make sure you’re stretching properly, and just doing all the little things to make sure that you’re ready for that game.

A: My team is fun. We all have a good time together. As much as we see each other on the field, we also hang out together off the field. I like to go fishing, so me and a couple guys will go fishing sometimes in the morning if we have an off day. Everyone’s got their own personality.

Q: So, they let you take your fishing stuff with you, or do you fish just when you’re in North Carolina?

A: Actually, I’m driving my truck back down today, or tomorrow morning, probably, and I’ll bring all my fishing stuff there so I can go out with the other guys.

Q: How much can you expect to earn in your first year?

Q: I’m sure that your brothers are two of your biggest fans…did you guys play baseball a lot together growing up?

A: Yeah, I was always playing with my brothers when I was growing up. I’m actually in my front yard right now-this is where we used to play stick ball every day. I would always go to their games. They were always playing with me and were always teaching me things…how to hit…how to throw…how to field-and both our parents, too. My mom used to throw the ground balls, and my dad was my coach all through Little League, and they’ve all been my biggest supporters throughout my college career, pro career, and even when I was six years old. I was always playing baseball, every day that I could.

Q: So that was the sport for you guys?

A: That was the sport. I played soccer in high school, and I wrestled, too, but we were always a baseball family. It’s just the way we were raised. Never turned back since.