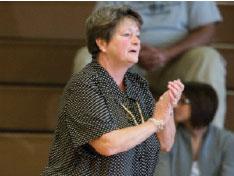 When Grinnell College sophomore guard Jack Taylor rose to the top of the NCAA record books by scoring 138 points on Nov. 20, the national sports spotlight shone down on a small school in Iowa, and the radical offensive system they employed.  While people around the country had to learn secondhand about Grinnell’s hockey-style line changes, barrages of three-pointers, and incessant full-court press, fans of the West Chester Lady Rams basketball team had a firsthand look at a disciple of the Grinnell school of thought.

Deirdre Kane, head coach of the West Chester University women’s basketball team, is a lifelong student of the game of basketball, and is one of the original benefactors of the Title IX initiative to give women equal opportunities in sports.

She was the first woman to receive a scholarship to the University of Dayton in Ohio, and considers herself, “fortunate to live through that transition.”  Having seen firsthand the evolution of women’s sports, Kane could be considered a credible expert on the sport she has coached since the late ’70s.

Coach Kane’s resume is filled with success.  As the holder of five Coach of the Year awards, as well as numerous playoff berths, PSAC titles, and NCAA tournament appearances, her achievement list is long enough that Kane could rest on her laurels as her coaching career winds down, content to slowly coast into retirement.  But last season, she did the unthinkable and made a radical change to her program by switching to the frenetic Grinnell system.

The Grinnell system is two pronged; its stated offensive objective is to put up at least 100 shots per game, with 50 to 60 percent of those takes being three point field goals.  Though the system was originally designed to be implemented on both ends of the court, the system’s influence is most evident in Kane’s defense and substitution patterns.

The Grinnell system is predicated on a full court press of your opponents for the entire length of the game, as well as substituting entire lineups of players at a time, similar to line changes in hockey, in order to keep fresh legs on the court and wear down your opponents.  It is a far cry from a traditional eight-man rotation, and for a coach to impose a quirky new system after 25 successful years at one school is almost unheard of.  Kane had been laughed out of the gym earlier in her career when she talked about the idea with the men’s coaches at West Chester, and shied away from making the jump.  Kane herself even admits that, “coaches don’t really hang around 25 years if they’re not doing something right.”

So why did the Lady Rams make the switch? Kane believed that this new system better fit the type of personnel she was able to recruit, explaining that, “It was just natural selection, survival of the fittest.” Describing West Chester’s home gym Hollinger Fieldhouse as a “prima donna repellant”, Kane thought the type of hard-nosed, blue-collar players she was recruiting would be the perfect fit for a system that was designed to wear down the opponent.  Taking advantage of the media timeouts that come every four minutes during their games, Kane thought that playing 10 women fairly equal minutes would give her girls a leg up on the competition. Without the major money to recruit blue chip recruits, depth is Kane’s most precious commodity, and one she thought she could manipulate to her advantage.

Junior guard Paige Elliot, a Lady Ram who was the benefit of extra minutes as a result of the new system last year, spoke glowingly about Kane’s switch to the Grinnell.  “It’s hard to beat us when we’re all on the same page,” said Elliot, who went as far as to say, “at the end of the day, it was a perfect fit for me.”  Paige’s excitement for the system was reflected on the court for the Lady Rams, as they put together their second straight 20 win season in the last three years.

This monumental shift was not without controversy, however.  As a result of the “line shift” substitution pattern adapted by Kane, the 10 girls who played on game day would practice together in groups of five, often scrimmaging their counterparts and battling the other group in drills.  Although the competition brought a level of intensity in practice that most coaches would love, it also served as a divisive force.  “It kind of made it in our heads where we were two different teams,” said Elliot.  “We had to get that out of our heads.”

Kane also talked about the common issue of taking players out of the game who were playing well on the court because of the sub patterns.  The proverbial “hot shooter” never wants to come out of the game, but Kane found that often times that same player would be so tired as a result of the extra minutes that it did not benefit the team.

Despite the issues that Kane and her team faced following the switch, on the whole the experiment should be considered a rousing success to add on to the resume of one of the finest coaches in the history of the PSAC.  As the winningest coach in WCU’s history and a pioneer of women’s basketball, Kane’s achievements may go unnoticed on a national scale, but her illustrious career is an example of what flexibility and a can do attitude can do for you.  “Reach for the stars, and even if you miss you still have a chunk of the sky to take home,” says Kane. Indeed, Kane’s story reinforces the ideal that we are all capable of freeing ourselves from the shackles of tradition in order to create our own unique, successful identities.

Kyle Neubeck is a WCU student majoring in English. He can be reached at KN669234@wcupa.edu.