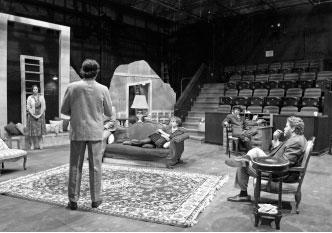 Currently celebrating its 50th Anniversary season, the West Chester University Department of Theatre and Dance is hauling out all the stops for its lucky patrons.

Most recently, the hard working students and faculty presented its rendition of “The Mousetrap.”

Much like the Theatre Department, Agatha Christie’s “The Mousetrap,” is celebrating an anniversary this year; it has been running in London since 1952. Such an amazing accomplishment distinguishes “The Mousetrap,” as the longest running show of the modern area.

A murder mystery with a surprise twist ending, it is easy to understand why the show has enjoyed such success. And WCU’s Theatre Department treated the show no differently than the players of the London stage. Their rendition had the audience members on the edge of their seats as they followed a group of strangers strapped with the task of determining who among them was the murderer. All of this intrigue took place in a mansion during a snowstorm-a perfect setting for the winter weather that the West Chester area has begun to experience.

Those who enjoyed “The Mousetrap,” or those wished they had gotten to enjoy it, will be pleased to learn that the Department of Theatre and Dance has much more in store. Look forward to its presentation of “A Year With Frog and Toad,” in March.

Molly Herbison is a second-year student majoring in English and minoring in Spanish. She can be reached at MH757997@wcupa.edu.