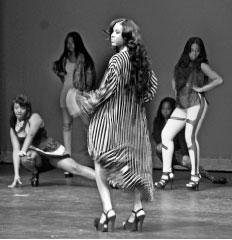 This year’s edition of the Precise fall fashion show was a smash. With over 400 people in attendance, the runway show was a step above and beyond last year’s. The murder theme was ever present throughout the show. The whole show was full of vogue influence.

The first scene kicked off the show with runway-style choreography. The  spins of the model in a black, sheer maxi skirt paired with black bandeau reminded me of a high-fashion dreidel. My favorite look from this scene was the beautiful model in a black leather skater skirt with a black quarter-sleeve shirt and black feathered cape.

The second scene, inspired by Beyonce’s “Jailhouse Confessions,” was phenomenal. After girls from scene one were killed by assassins in scream masks, in waltzed the homicidal girlfriends. The first woman killed her husband in the bathtub because she was tired of tending to his every need. The second girl killed her ex-boyfriend at his wedding to play on the “death do us part” mantra. The third woman killed her boyfriend because she found out he was cheating on her in every city she took him to. This scene also featured homage to Beyonce’s memorable “Ring The Alarm” performance at the 2009 VMA’s. My favorite look from this scene was the tan blazer with gold shimmering sleeves, paired with this year’s extremely popular black bandeau, and gold glitter hot pants.

Scene three was rather short, and it featured an exorcism.

After the intermission, which featured the Addictive dance team, the board members of Precise stepped out for Scene 4. This scene was my favorite because it had the most exciting choreography. At one point, the entire group fell into an impressive death drop. This scene ended with board members killing each other off. One of my favorite looks from this scene was the gold biker shorts paired with the red quarter sleeve shirt and a cropped leather biker jacket personalized with gold studs on the collar. The look was to die for.

Scenes 5 and 6 were among the darkest scenes of the show. Scene 5 featured a skit reenacting scenes from the Paranormal Activity movies. The clothing in the scene was very dark, mostly ranging from black to darker shades of blue. Scene 6 was “Thriller,” done Ram-style. Girls were on their way to a party in true West Chester fashion, and decided to take a short-cut through the graveyard. The show ended with all of the models and board members doing the famous “Thriller” choreography.