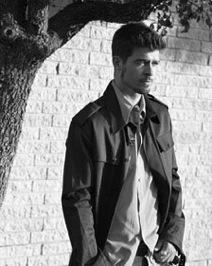 Robin Thicke has won grammy awards as the songwriter and producer of records for artists such as Christina Aguilera and Michael Jackson. It could be difficult following A Beautiful World, Thicke’s first album, and one of my favorite albums in the universe. Thicke has continued to express his vocal range and diverse sounds on “The Evolution of Robin Thicke.”

He has truly impressed the world once again! It tells stories of his trials and experiences in life and love.

“My greatest desire with this album was to write songs that were completely honest and sing them with the emotion I was feeling when I wrote them, so that whoever listens to my music is brought as close to my experiences and life as possible,” says Thicke.

I was surprised when I put this album in my iTunes, and the genre displayed “Pop.”

I believe this album truly shows a diverse range of talent, which is not commercially found in the background of a Laguna Beach episode.

Maybe some songs sound like pop, but the majority of the album consists, of jazz, soul, blues and R&B. This man definitely knows his music.

The first single from his album, “Wanna Love U Girl,” featuring Pharrell Williams was released early this year. In addition, Robin Thicke has been signed to Pharrell Williams’ record label, Star Trak which could be a considered a hip-hop label.

One could assume from being signed to such a label as Star Trak, Thicke would convert to an urban style from the hippie-soul-rock star which was displayed on his first album.

On the other hand, Thicke appears to be more polished and the long hair and ripped jeans have been put aside for tailored suits and a more polished appeal.

This album matches his new look, which is more “calm, cool, and collected.” The most recent single, “Lost Without U,” can also describe this album. This soulful single alone, incorporates Latin rhythms that relaxes the mind and makes you smile while thinking of that special someone.

The Evolution of Robin Thicke consists of a range of genres such as jazz, which is displayed in “I Need Love,” and “2 the Sky,” and R&B in “Cocaine” and “Got 2 Be Down,” featuring Faith Evans.

The easy listening/ Latin genre can be found in the songs, “Teach U a Lesson”, “Everything I Can’t Have” and “Ask Myself.”

“Angel” definitely has more of a blues feel where Thicke is searching for his angel. The instrumental solos in this piece are very soulful as each solo tells its own story.

Another known single “Shooter,” featuring rapper, Lil Wayne. “Shooter” is actually a remixed version of the same song on Thickes first album. Lil Wayne is also featured on the song, “All Night Long.”

All in all, this album is very honest and definitely an album worth spending. Robin Thicke will be touring with John Legend this fall. Catch ’em if you can!