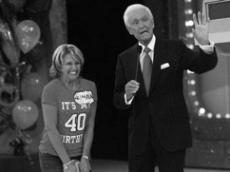 Bob Barker announced last Tuesday that he will be retiring in June of 2007. He spent fifty years on televison, 35 of those years as the host for “The Price is Right.” “I will be 83 years old on December 12, and I’ve decided to retire while I’m still young.” Barker had a mild stroke in May 2002, and then had prostate surgery six weeks later. Neither of which cause him to miss an episode, mind you. In fact, Barker has only missed three episodes since the premier of “The Price is Right” on September 4, 1972. “The Price is Right” just won’t be the same without him. On another note, Reese Witherspoon and Ryan Phillipe have formally separated after seven years of marriage. The couple started out their year winning Oscars; Witherspoon for her role as June Carter Cash in “Walk the Line,” and Phillipe in the best picture winner “Crash” but they are ending the year on a low note. Phillipe, 32 and Witherspoon, 30 remain committed to their family. They have two children, seven year old Ava and three year old Deacon. Reese has been consulting with top Hollywood divorce lawyer Robert Kauffman, the guy who guided Jennifer Anniston, Roseanne Barr, and Lisa Marie Presley through their high profile splits. According to various sources Witherspoon and Phillipe did not have a prenuptial agreement before they married in 1999. According to California law, where the couple reside, the earnings of the two would be divided right down the middle. Considering the differential in their finances- Witherspoon could conceivably end up dishing out some major money. She commands a $20 million per film paycheck, and Phillipe gets about $2.5 million per film; a huge difference. She is going to need that top lawyer.

Also, TV actress Marcia Cross is desparately trying to keep some nude photographs of herself away from the eyes of the public. Cross and her husband, Tom Mahoney threw out more than 200 old personal photographs. Apparently some of them were as personal as you can get. David Hans Schmidt is the agent representing the trash-hauling firm whose employees say they discovered the photos at the dump. “There are some pictures of her showering outside,” Schmidt claims, “She looks absolutely gorgeous. And yes, the carpet does match the curtains.” Mahoney and Cross promptly dispatched a team of lawyers, who are claiming that the photographs were thrown out by accident and cannot be published, anywhere, ever, without her permission. It has been determined that this whole ordeal will most likely be settled by a hefty check, written out and signed by Cross herself.