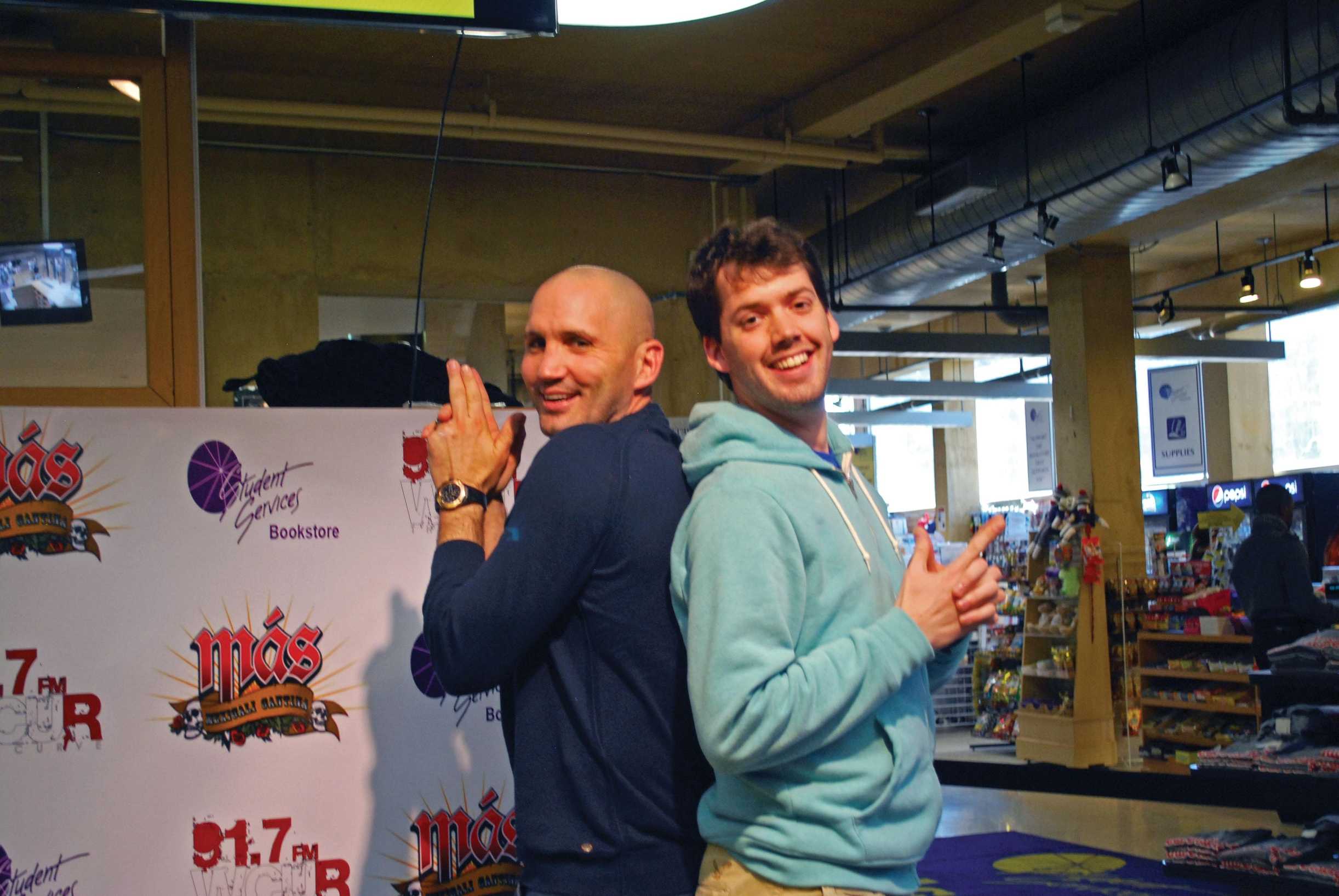 WCUR 91.7, Mas Mexicali Cantina and the SSI Bookstore teamed up to bring the fan favorite Laperriere to campus for a half-hour private meet and greet followed by an hour-long autograph session open to the public.

Laperriere arrived at the radio station at 4:30 p.m. to talk with the 20 some fans who were selected to be a part of the Mas Mexicale VIP Experience, a catered meet and greet in the lounge of the station. Guests included the WCUR executive board, the captain and alternate captains for the national champion women’s hockey team, and several fans who won tickets through WVUR contest giveaways.

Laperriere spent about half an hour meeting, taking pictures, signing autographs, and chatting with everyone in the station before coming on-air for a live interview with the hosts of Brotherly Love Sports Talk, one of the shows that helped bring Laperriere to campus.

“He was well-spoken and eager to share his experiences on and off the ice,” said Jason Singer, one of the hosts of Brotherly Love Sports Talk.  “But above all, his insights into the world of hockey, and the Flyers especially, were excellent.”

“It was an awesome experience getting to personally meet someone who has played at such a high level of the sport we both love,” said women’s hockey goaltender Aly Golia. “Laperriere was so nice and friendly to everyone.”

Following the private meet and great, the former Flyer made his way to the SSI Bookstore, where close to 150 cheering fans were waiting in line for an autograph and a picture. Some students were in line as much as an hour and a half before.

For about an hour Laperriere stood at a table surrounded by his fans, music and a slideshow of highlights from his career as he personally greeted every person in line, signed autographs, and posed for photos.

One of the things that appeared to touch many of the fans was the easygoing nature of Laperriere. He was not paid to do the event and he does not live close to West Chester, but he had a smile on his face the entire time and seemed to genuinely have fun meeting his fans.

It was just another reminder why he was such a fan favorite in all of the cities he played in throughout his career.

“Not only was he incredibly down to earth and friendly, but he also was funny and easy to be around,” Singer said. “His personality off the ice contrasted strongly with the ferocity which he played with on the ice.”

When the line fizzled down and Laperriere made his exit, there was not a puck left unsigned or photo left untaken. All that was left were happy fans.

“It was a lot of fun,” WCUR’s program director Jessica Micchelli  said. “Even if you aren’t a big sports fan it was cool to meet someone who is so important to Philadelphia.”

Kenny Ayres is a third-year student majoring in communication studies. He can be reached at KA739433@wcupa.edu.