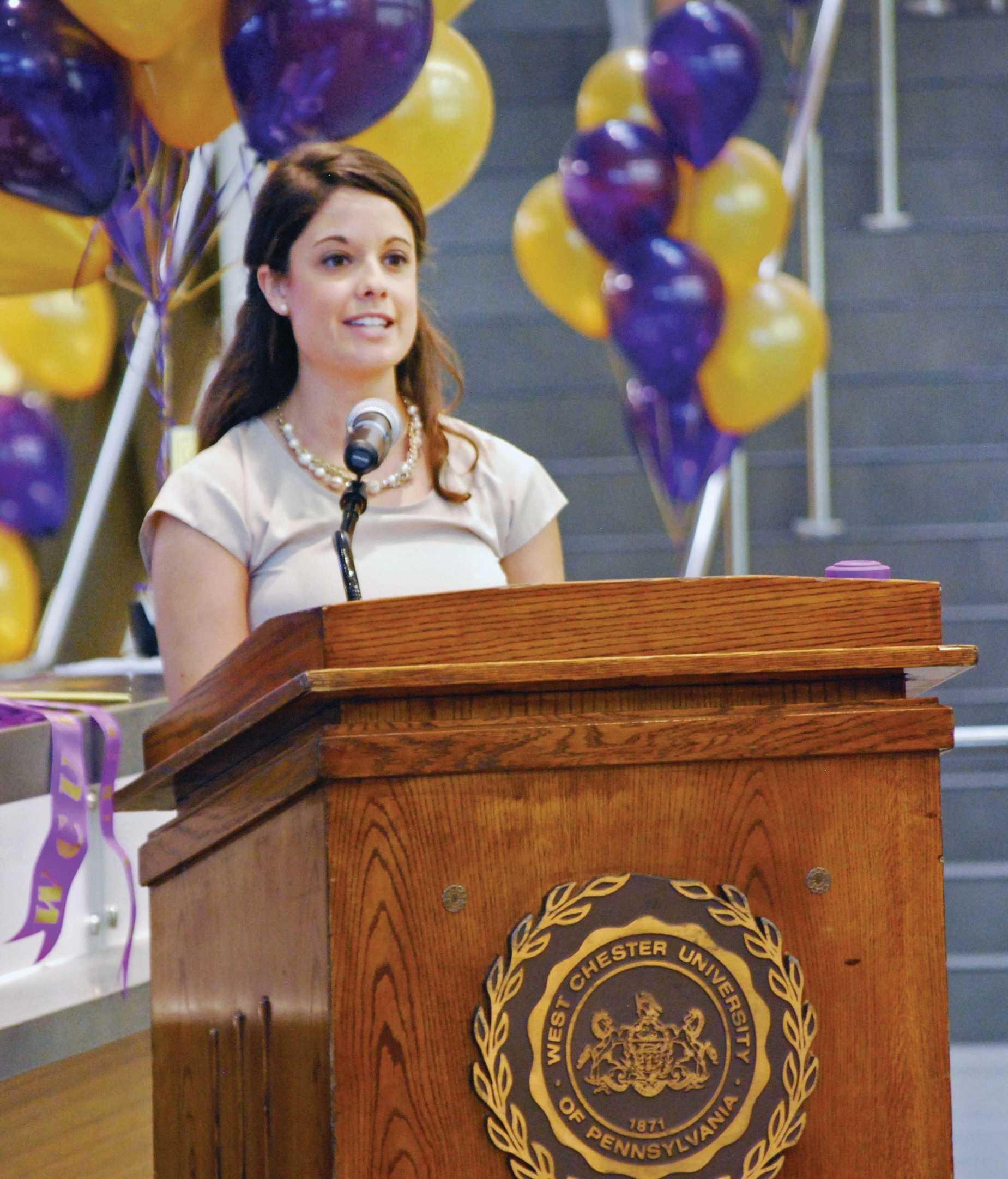 On October 2, 2012, the Rec Center, located near Tyson Hall, was officially opened during a grand opening ceremony. Although rainy and gloomy outside, the atmosphere within the Rec Center was very much alive.

Upon entrance, one saw the main stairs decorated with purple and gold balloon arches and a large group of people surrounded in the first floor social lounge. Alumni, friends and family, current students of West Chester University, members from the Board of Governors, members from the Council of Trustees, the Mayor of West Chester, members of the WCU Foundation, and more were present.

As guests made their way to their seats, the ceremony began. Diane DeVestern, Assistant Vice President for Student Affairs, presented a welcoming address to the many who showed up to the event. After thanking everyone for attending the grand opening, DeVestern then passed the microphone to Dr. Matthew Bricketto, Vice President for Student Affairs, who informed everyone about the building, itself. Approximately 72,575 square feet, the new Student Recreation Center was first constructed in the Fall of 2010, and is now a hot spot for WCU faculty, staff, and students. The Rec Center offers a wide variety of programs and consists of state-of-the-art features, such as a rock wall, aerobic studios, social lounges, and much more. Open 121 hours a week, and with over 2,000 students using the Rec Center’s facilities a day, students are achieving a positive and healthy lifestyles. He then concluded by thanking past and present West Chester students for being a part of the project, President Weisenstein, and Steve Gambino, Director of Campus Recreation, and his professional and student staff members for making the idea of the new Rec Center, a reality. With that concluded, Mark Mixner, Vice President for Administration and Finance took the stand next.  Mixner gave out more thanks to all the teams that worked on the Rec Center during the past two years. He then described some features that may not be visually predominant, but add to the glory of the building, including solar panels, two green roofs, and the use of recycled materials throughout the building. He concluded by commending WCU’s effort to be sustainable, before passing the microphone to Michelle Strausbaugh, President of Student Government Association. Michelle highlighted the fact that the Rec Center is student oriented, and is for the students by the students. She also mentioned that many past and current students signed 450 small tiles for the mosaic hanging in the building over the past two years. The Student Government Association also donated a university ram logo, which can be seen on the sidewalk as students walk into the building. The final speaker,  Brad Horstmann is an alumni of West Chester and was a member of the Recreation Center Committee. By playing a central role in the construction of the Rec Center, he described what it was like working on site and seeing a lot of students’ efforts go into the building. He described that students chose the words confidence, strength, character, dedication, success, and respect to be engraved on the wall behind the Hydration Station. He concluded by saying that the Rec Center is “Of the students, for the students, by the students.”

Towards the end of the ceremony, a purple ribbon adorned with gold WCU letters was cut to officially announce the opening of the Rec Center. After thanking everyone once more for being there, tours of the building and refreshments were given.

Amy Shah is a first year student majoring in computer science. She can be reached at AS793452@wcupa.edu. 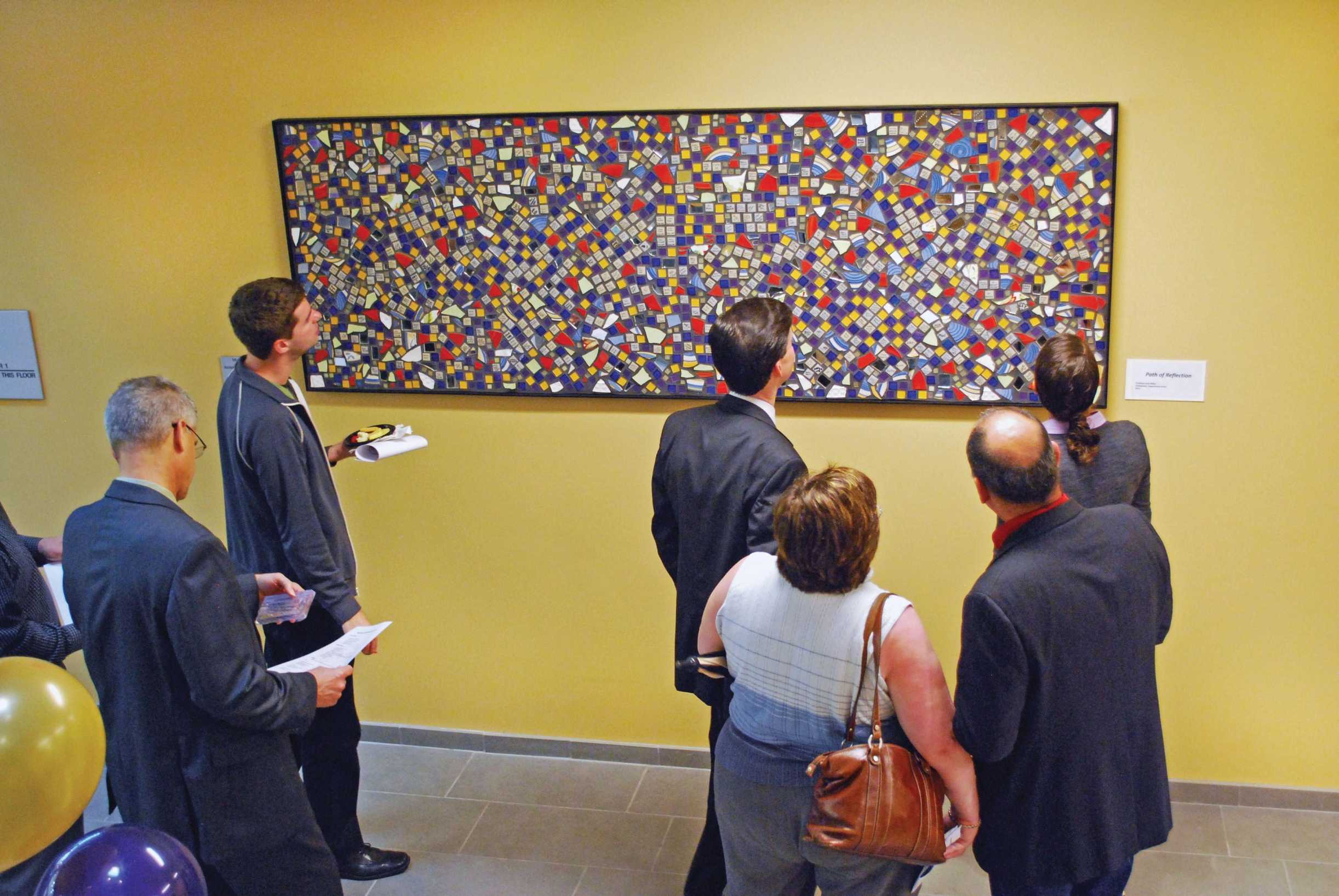