“Under A Rest” Represents West Chester University at Radio City 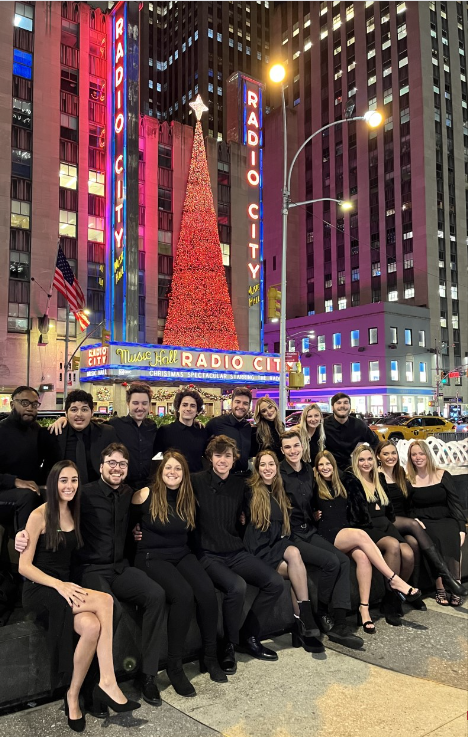 West Chester University’s “Under A Rest” performed on Black Friday, Nov. 25 at Radio City Music Hall in New York City. As the opening act, they performed “God Rest Ye Merry Gentlemen,” arranged by one of their group members, Nile Gay, and “Mary Did You Know,” arranged by Pentatonix before the Rockettes presented their work.

“Opening for the Rockettes was one of the most magical, unforgettable and fulfilling experiences of my life — especially as a performer,” exclaimed Steven Kendikian, the music committee member of the club. “I am so grateful for the family, friends, mentors, experiences and opportunities that led to this performance, and I wouldn’t trade it for the world. I love my Under a Rest family, and I will cherish this experience for the rest of my life.”

Under A Rest is a soprano, alto, tenor and bass gender-inclusive a cappella group and one of the four a cappella groups at West Chester University. Established in 2014, the two-time International Championship of Collegiate A Cappella quarterfinal champions perform contemporary music around the campus and community. Over the past eight years, Under A Rest has produced three studio albums, award-winning music videos and has now performed at Radio City Music Hall in November of 2022.

“Surprisingly, Radio City actually reached out to us for this performance. When I first received the email, I thought this opportunity was a scam – I even called up the ticket vendors to find out if this was a legitimate offer,” said Zachary Zajkowski, president of the a cappella group. “After discovering that this was in fact a real opportunity, I found out that officials at Radio City came across our YouTube page, saw our music videos and extended the opportunity to perform on their stage just before the Rockettes.”

The organization had said that traveling to New York was a “daunting logistical task” since they were all in various locations over break. Most of the group were able to travel with friends and family, but for group members who did not have friends or family attending, they carpooled to 30th Street Station in Philadelphia, took the train to Trenton and then boarded another train to Penn Station, New York.

Their executive board began planning the Radio City trip in August, which they had said “required lots of initiative and forethought.” With around 5,000 people attending the show, Zajkowski described it as “an opportunity I would likely never have again. The feeling was absolutely indescribable. It was surreal.”

Kendikian identified the experience as “a bit overwhelming! As a seasoned performer, I was incredibly excited. As a newbie to the Radio City Music Hall stage, I was a bit intimidated!”

Before the performance, they all met right outside Radio City Music Hall to take pictures and warm up. Throughout the rest of the day, they went their separate ways with their friends and family to visit various stores and restaurants.

“I am beyond humbled and grateful I could be part of an opportunity so special,” said Zajkowski. “Thankful does not even come close to describing the admiration I have for this experience and the incredible people beside me.”