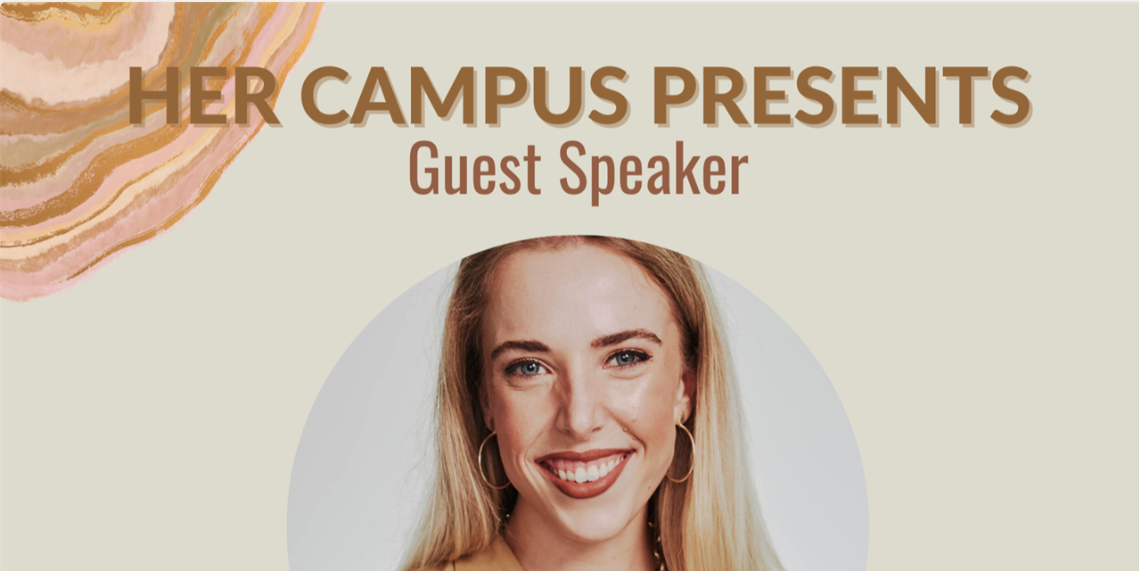 On Nov. 2, West Chester University’s student organization Her Campus welcomed associate editor for Elle Magazine, Lauren Puckett-Pope. Lauren provided a brief overview of her job focus and career history. Although primarily covering entertainment, specifically film and TV, she also has experience doing beauty pieces and celebrity cover interviews, such as her celebrity feature on Tatiana Manslany. Lauren has recently written about the upcoming season of Stranger Things, Taylor Swift’s album “Midnights” and Game of Thrones spin off “House of The Dragon.” Her articles can be found through Elle Magazine’s website.

The University of Missouri graduate outlined her journey from her undergraduate studies to her career at Elle, noting that there is a common misconception among writers that there is only one correct path to success. Following her college graduation, Lauren Puckett-Pope enrolled in graduate school at her alma mater: “I felt that I loved my undergrad experience, but I hadn’t done what I needed to do with it.” Puckett- Pope suggested it is easy to look at what others have done, see their success, and decide that one should model their own life choices based on that. Pope dismissed this idea stating, “There is no clear roadmap. There are no clear steps from graduation.”

What experience did you have during your undergraduate?

Puckett-Pope discussed her choice to freelance during graduate school, stating how important this was to her future career endeavors. Freelance writing provided a flexible work schedule while also giving her the ability to form a portfolio of published works and some financial stability. She also comments on the insight that freelance writing gave her to the media and publishing industry. “I did a couple of internships… I worked for 5280 Magazine.” Ultimately, Pope graduated and found a job opportunity as an Executive Assistant for Hearst Magazines, the parent company of Elle, Cosmopolitan, Harper’s Bazaar and more.

She commented on how finding her entry level job at Hearst magazines was “a total stroke of luck,” which is “often a part of the job process.” The job she accepted was primarily administration work but provided her the opportunity to write in her free time and pitch to the magazines around her.

What is the best advice you’ve been given?

Puckett-Pope remarked on how most advice writers and editors will give surrounds networking: “Networking is fabulous and important, but you can’t fake the work itself.” Continuing, she enforced the idea that you have to pour yourself into everything you do because no story is just a small story. “When you have a story or opportunity, use it. Research it, interview, read everything you can about it.” She also gives the advice to “hone your craft.” “It’s okay to be a generalist at the beginning, try everything and find what speaks to you. Be honest about what you love doing.” Puckett-Pope reiterated one of her biggest pieces of advice: “Dig in. The opportunity to write is not something small. Give it your all, love it deeply, but don’t let it become your all because it’s not your all, it’s a job.”

Did you switch the way you wrote for specific magazines?

“There is a balance between tailoring your voice for a specific publication while also having a voice that is your own.” Puckett-Pope admits that she has had to do some tailoring for various publications, remarking on how Cosmopolitan magazine has a different overall tone than Elle. In the instances where she has written for Cosmo, she has tailored her voice to fit the magazine’s tone. This is not something limited to a magazine like Cosmo, Puckett-Pope clarified, stating, “a story for The Atlantic is going to be different than a story for New York Times or Vulture. Once you figure out your own voice you’ll find what publications best fit that.”

Do you have a process you go through when writing a piece?

“It is definitely different for every piece because every piece calls for something different.” As part of her process, she reads or watches the media, interviews people involved, reads everything available online, finds common threads and takes a lot of notes. She also notes the importance of doing “secondaries,” which are interviews with people adjacent to the subject of her articles. This could be a celebrity’s best friend, costar, director, etc. Puckett-Pope gave honest advice to ask for help when you need it: “Be honest about what you don’t know. If it’s something I’m not an expert in, I ask someone who is.”

How long does it take to write an article?

Puckett-Pope states it is different for every article, depending on how thorough the subject matter needs to be and on expected length. “I’ve cranked out some in 20 minutes, like when the Queen passed.” She said sudden news articles require immediate action, unlike planned articles. She stated that she can write shorter pieces in a day. This does not include the time needed to research and prepare for the writing process, which can take a week or longer. “I really deeply believe in taking the time you need to tell the story right.” She noted speed is still important, but what matters is that you tell a good story truthfully and you get it right.

When you’re interviewing, especially high profile celebrities, how do you curate your questions to promote humanity?

Puckett-Pope remarks that this is one of the trickiest skills to hone. She prepares her questions meticulously, making a long list and preparing ahead of time. Then, she chooses to not read from her list during the interview. “Generally I try really hard not to [read her prepared questions] because it reminds the person that it’s an interview. You want it to feel like it’s a conversation and like you’re someone they can trust.“ She ranks her questions on importance. There are some relevant questions that can be sensitive, but need coverage. Below those are topics she knows she wants to get to because they could be important for the cover. Finally, there are final questions, which can be fun, even though they sometimes never get published. She touches on the importance of trust during interviews, developing a rapport with the person and not wanting to startle or confront them with questions.