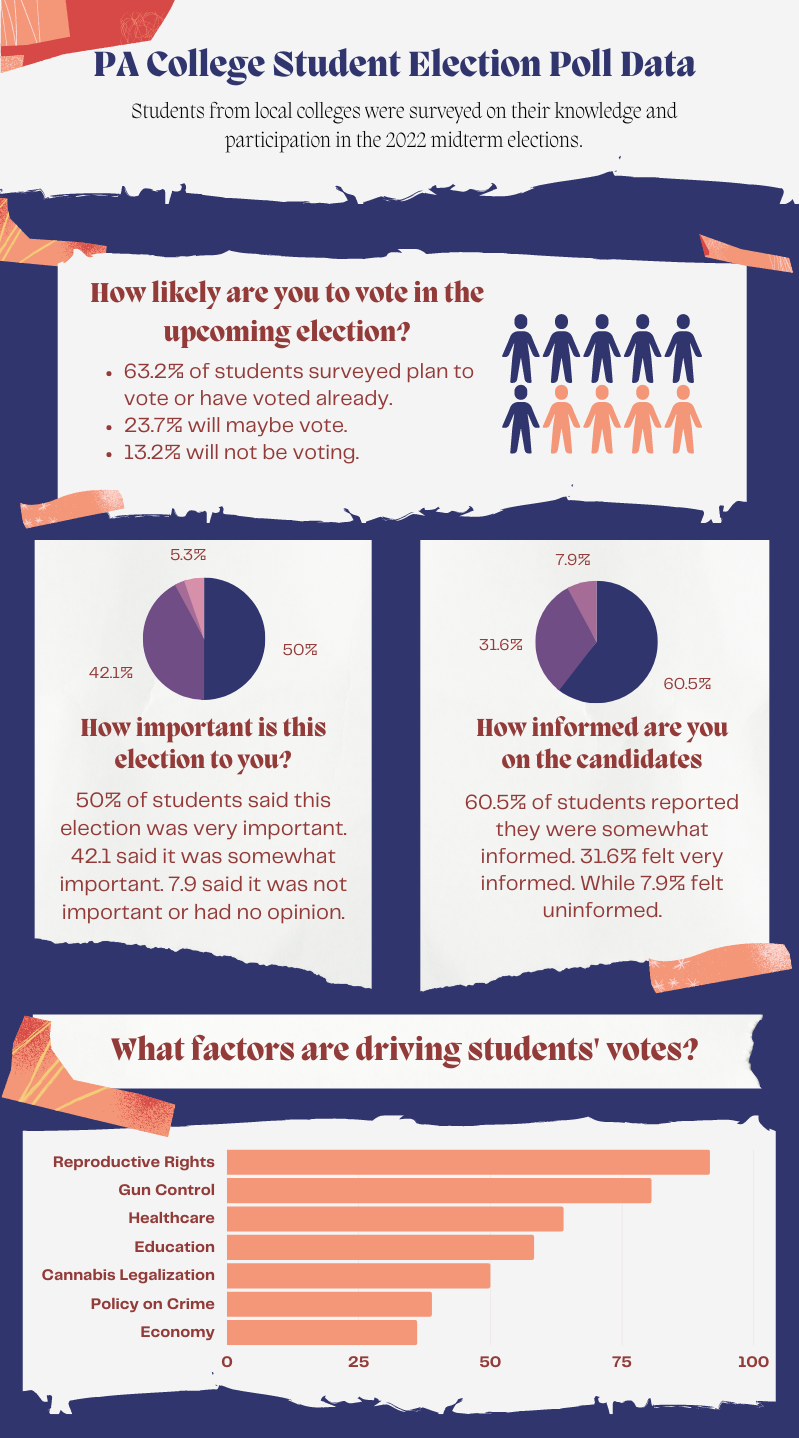 The Washington Examiner has been tracking five issues in Pennsylvania using Google search data and found PA voters have been most drawn to policies on education as the main force behind deciding their vote. Candidates’ policies on crime and taxes had been in second and third places respectively. However, a survey posed to students from universities around Pennsylvania, including West Chester University, Millersville, Elizabethtown, and Penn State, found that students considered abortion and reproductive rights to matter the most to them in the upcoming election.

In the small-scale survey with 38 respondents, 94.1% of respondents considered abortion and reproductive rights to be a major factor in deciding which candidate they’d be voting for. One respondent stated, “This [election] is important. Especially because I am voting for my right to have an abortion.”  In second place was 79.4% for gun control policies. In third place was healthcare at 64.7%. Students responding to the survey had also been given the options of: education, legalization of cannabis, policy on crime, workers unions and fracking, which all had scattered percentages. Respondents had been given the option to fill in their own factor, which one student used to answer, “Higher minimum wage and better working conditions”

However, some of the students who did not plan to vote in the midterm election reasoned that they were unfamiliar with the candidates or did not like any of the candidates running. A little over half of respondents, 60.5%, felt they were only somewhat informed about the candidates, 31.6% felt very informed, and a slim 7.9% didn’t feel informed at all. Students attributed their awareness of candidates and their campaigns mostly to social media, but also online news sources including The New York Times and Associated Press. Some tie the bombardment of television commercials and advertisements to their awareness.

So what does this all mean? The increase in voter participation amongst college students means that students should be informed on voting practices, yet many are not. As shown by the survey responses, many students did not know how to request a mail-in ballot, or that they could even request one. One student answered, “I have just been busy and ran out of time to send in for a mail in ballot!” For reference, voters can automatically set up to receive a mail-in ballot which may be most accessible for college students, since ballots can be sent in advance, but they must be received by Nov. 8 at the latest.

Additionally, students tend to be informed on the matters that are most publicized, an example of this being abortion due to the overturning of Roe v. Wade. However, candidates are running on multiple policies, some of which students may be unaware of because it is not publicly talked about on social media. What is posted on social media or promoted on television advertisements should not be taken at face-value. One of the best ways to stay informed on candidates and their policies is to do research into their campaign website, or even attend a rally.

While not everyone may be fond of voting or politics, it is still important to be informed on political matters. Voting is a civic duty, one that every citizen should be participating in. All the information you could need to make a decision about the midterm election is at your fingertips. Informing yourself about candidates can be as simple as going onto their website, or tuning in to a debate. If you haven’t already, plan how you will vote on Nov. 8 with websites such as https://www.vote.org/.

Kelly Wallace is a second-year media & culture major with a minor in journalism. KW978394@wcupa.edu