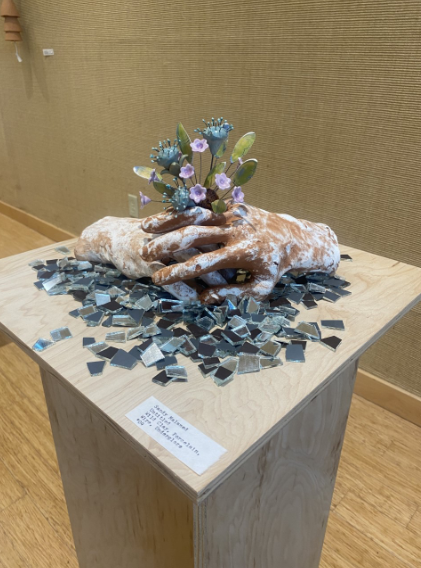 The John E. Baker Gallery in West Chester University’s E.O Bull Center is hosting a one-of-a-kind ceramics exhibit titled “Not That Brandywine Tradition.” The show is made up of pieces from students, alumni, professors and local artists. The thing that makes this exhibit special is that all of the clay used in the show was found out in the wild and processed by the creators themselves.

The curator of the show, Professor Andrew Snyder, an art professor here at WCU, said that the project is “the definition of experiential learning.” During the COVID-19 pandemic, students taking Snyder’s ceramic class did not have access to the school’s clay and pottery wheels. This left the plan for the course up in the air. Snyder could have focused on theory and writing about pottery methods, but he said he “wanted them to be creative problem solvers.” He encouraged them to use the land around them to find the clay they needed. To further help them, he created The East Main Hand Wheel and sent it to each of his students to use throughout the process.

The process of harvesting wild clay for use is a long and intricate process. Snyder had a small section in the gallery that displayed the various tools and items needed to transform wild clay into a product that can be used on the wheel. Lindsay Colantuno, a fourth-year English major with a piece in the exhibit, described the process as taking a very long time. She described the exhibit as a “fun and funky” reference to a long-standing tradition already present in the community, The Brandywine Tradition.

This tradition stems from The Brandywine School, which is an art movement that has been popular in this region for a very long time. It is a method of illustration that established a new style for colonists in areas close to the Brandywine River to paint with. Over the years, it became known as The Brandywine Tradition. Snyder says the style of this school is clear to see throughout the West Chester area once one becomes familiar with it. Snyder said “the title preceded the concept of the show” as it references this tradition but is the beginning of a new tradition that he is hoping to begin. This new one still uses the beauty of the area to create art, just in a different way than some of the past Brandywine illustrators.

The challenge to gather clay has continued even after students returned to in-person classes, with ceramics students this year taking a group canoeing trip in local woods. The students worked to find clay and make creations of their own. Many of these results are displayed in the exhibit in the form of cups, bowls, vases and animal designs. Along with these, there are intricate clay sculptures, portraits on canvas and stations showing the process of transforming the clay. One wall is dedicated to depicting the canoeing trip that students took to retrieve their clay. A map with pins at the sites of discovery and lots of pictures of the excursion in this section really immerses the viewers into the process of gathering clay. The exhibit is also filled with QR codes that lead you to more information about those who discovered clay or videos they shot during the process. John H. Baker, former WCU professor and the gallery’s namesake, has an entertaining video of his clay discovery right by the entrance.

This show is described by Snyder as an educational exhibit. Anyone who visits gets to not only see the impressive displays of ceramic work done by students and local artists, but can also learn about the history of art and pottery in the area while gaining knowledge on how to find and process wild clay themselves. The show is dedicated to the class of 2020 and to the memory of Mitch Lyons, an artist who invented monoprinting and whose work inspired Snyder while curating the exhibit.

“Not That Brandywine Tradition” will be showing in the John H. Baker Gallery until Dec. 9, and everyone is welcome to come by and see all it has to offer. It could inspire some more students to, as Snyder writes in his exhibit description, “dig a hole and find some clay.”