A Successful Day for the Language and Cultures Fair at WCU 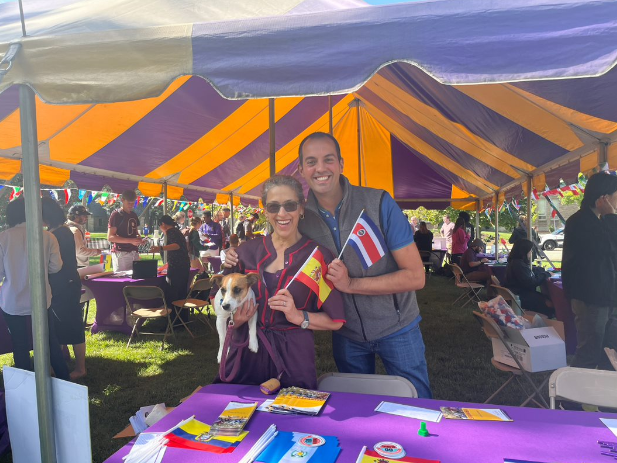 Dr. Van Liew and Professor Sanz-Sánchez at their booths for the fair. Photo credits – Lauren Beachy

There are over 7,000 languages that are spoken on this earth. Within the United States, there are over 300 languages spoken, and in the state of Pennsylvania there are a little over 40 (Linguistic Landscape). This past Monday, Sept. 26, West Chester University Department of Languages and Culture hosted a fair outside of Mitchell Hall to showcase the various language programs, courses taught and study-abroad options the school offers.

West Chester used to have predominantly European-based languages, but then started integrating a “critical language program.” The global geopolitical and economic landscape started to shift and change, so they started incorporating languages like Chinese, Japanese, Russian, Arabic, etc. There are bachelor’s degrees within these various languages, accelerated master’s degrees, minors, honorary societies and clubs that students can get involved in with the language they choose.

Spanish cultural studies Professor Dr. Van Liew took the time to talk about how important not only language is, but the culture of the language as well and why it is so important that West Chester offers culture classes alongside learning a language.

“I teach Spanish, and when you say Spanish, it’s the language that carries so much of the culture and cultures in it. Especially like English, Spanish, Chinese, these languages are so widely spoken because of the colonial heritage of so many places, so it’s very vast. Once you start dipping into a language, you start learning about various cultures, the variations, etc… rather than this being intimidating, it’s a celebration. Employers also look for this — more diversity in writing and communication with others. Rather than being intimidated, it should just be thought of as a door to walk through.”

Dr. Van Liew opened up about how language changed the trajectory of her life. She was monolingual until her second semester in college, and she had never thought that her entire career would involve languages. “It changed my life. Go travel, learn something new from others, hey, even fall in love. It’s so important.”

As of right now, West Chester University only offers linguistics as a minor. Within the next year, the College of Arts and Humanities are hoping to turn it into a little something more.

Israel Sanz-Sánchez, another professor in the Spanish department who is one of the main advocates for the change, discussed more in depth the process of hopefully making linguistics a major offered at the university.

“This would be the first linguistics major at a public Pennsylvania University. It’s cool because we will have something that does not exist anywhere else. We have one of the largest minors in the College of Arts and Humanities, I mean, every week I’m getting emails from students asking when this is going to happen. We need to channel that energy into the proposal. This will be a process over the course of this year, and hopefully, fingers crossed, the new program will be installed for people to start taking next fall.”

The Department of Languages and Cultures seemed to have a successful day of informing and educating students about the endless opportunities with languages.

Lauren Beachy is a third-year Media and Culture major with a minor in Communication Studies. LB946715@wcupa.edu