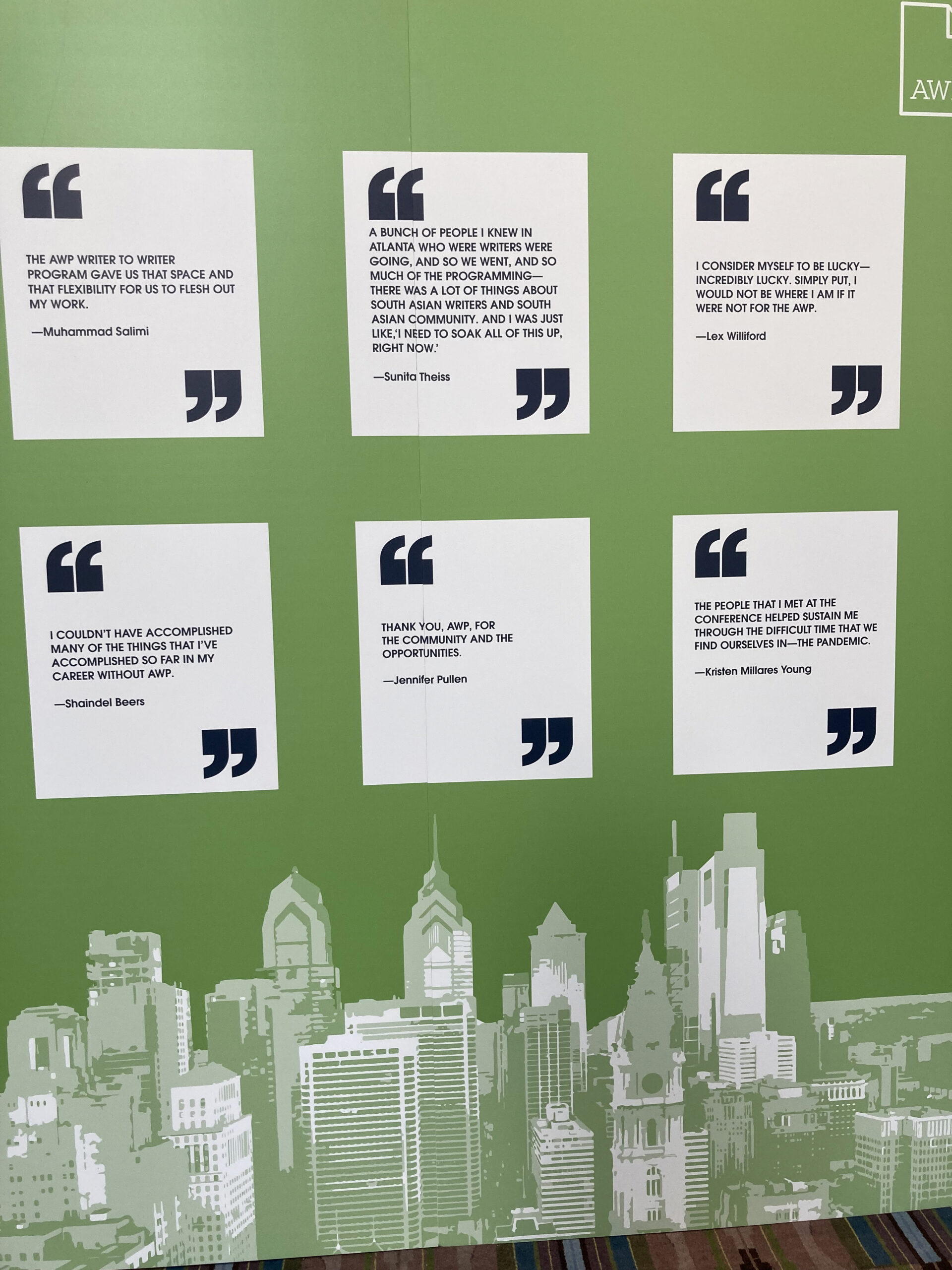 A couple weeks ago, I was one of the multiple lucky English students here at WCU to attend a writing conference in Philadelphia. AWP, or the Association of Writers & Writing Programs, rarely picks the city of Philadelphia to be the venue for their annual conference, but this year, we got lucky.

Hundreds of people gathered at the Philadelphia Convention Center. I walked in with a friend, excitedly checking in and receiving my green lanyard. As an English major new to the literary world and a novice writer, the scene of publishers, editors and writers all together was astounding. People flew in from all across the country for the conference so the event was exceeding my expectations.

The conference included a book fair aisles and aisles wide. The book fair was assembled of dozens of booths and tables for individual publishers and university writing programs to set up their information, sell books and make connections. West Chester University’s poetry center had their own table where I and a couple other peers contributed to running the booth. I collected free pins, anthologies, tote bags, as well as business cards and flyers of writing contest information.

Along the way, I was met with a couple writers who I knew solely through literary magazine submissions and Twitter conversations. I strolled through the book fair and took note of the busy nervous energies in the air, mixing with the smell of freshly printed paper. If you were there, it was easy to observe writers and professors reuniting with friends from their former graduate programs, as well as younger undergraduate students from schools far and wide. From the Kelly Writers House at the University of Pennsylvania, to the University of Texas, literary presses ranged from all over the map.

This AWP conference is the first one in-person again since the pandemic. The conference did a thorough check-in with each person to show proof of vaccination, and there was rarely a face seen without a mask. This brought relief to me to see so many other people concerned about the lingering effects of the pandemic and taking precaution so that we could all gather safely after a long period of pure isolation.

Many writers and authors there were giving readings and leading panel discussions. On the first day, a couple of my classmates and I went to a local coffee shop within the city to see our professor, Nancy Pearson, give a reading from her poetry books, “The Whole by Contemplation of a Single Bone” and “Two Minutes of Light.” A few other notable authors I was excited to see included Kazam Ali and Annie Finch.

I attended a good handful of panels that discussed things like shaping characters within nonfiction writing, writing from memory, as well as narrative writing. What I had in mind prior to attending, with a slight knowledge of what to expert, had me thinking there would be a mix of panel discussions as well as workshops. Being a writer who always needs more time to write, having time to focus and collaborate with new people would have been something I looked forward to. Instead, the days consisted of panels that often overlapped each other within time slots. People urged us to pace ourselves, which was important as I took breaks to eat and explore. But what would’ve kept me more engaged day after day would have been workshops integrated, too. You can only talk about writing so much before you just want to sit down and actually do it.

An important aspect of the conference, as well, was seeing writers who don’t look or sound like me. At one of the panel discussions, I listened to a handful of writers from all backgrounds who discussed what it was like growing up in their shoes and how that shaped their writing careers. One of the authors was a transgender man who dealt with hate and bullying most of his life during periods where he was taking on the difficulties of grappling with his gender identity. Other authors on the panel dealt with racism, misogyny, mental illness and medical trauma. My vision as a writer can not be one-dimensional, so this experience expanded my outlook on life with writing and how they coexist.

It is also a unique experience, however, to take a look around a nation-wide conference and see just how many people exist who do what you want to do, too. Still overwhelming in the sense that just that many people…are indeed, in a way, just. like. you. The trip was an exciting experience overall despite me leaving a day early to recover from the amount of energy it took. It was so worth it to go, and I would not trade my experience there for anything. What I learned from experienced authors was invaluable and taught me how to keep growing as a writer.