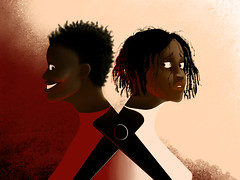 As we wrap with Black History Month, there are tons of iconic movies starring Black actors and actresses. From Amandla Stanberg to Lupita N’Yong, Black actors have made a huge impact on the standard for acting in Hollywood. During this month, watching any of these movies helps highlight the struggles of different Black communities from going to a PWI and facing the backhanded racism of your friends, to battling coming out to your friends and family. These five movies help shed light onto Black culture in a beautifully cinematic way.

Adelaide Wilson decides one summer to go to her childhood beach house with her husband and two kids. While at the beach, she begins to have a horrible feeling that something bad has happened to her at that boardwalk but she is unable to remember what happened. After a chaotic beach day, they all drive home to the beach house and get settled down for bed. As everyone is hanging out they hear someone outside their door and check to see who it is. When looking out the window they discover four masked strangers whose bodies are similar to the Wilson’s. They begin to try to break into the beach house forcing her and her husband to try and defend themselves. Once the intruders break in, the Wilson’s realize that they are their evil doppelgängers. These look-alikes, known as the Tethered, explain to the family that they are here to get justice for having to be hidden underground while the Wilson’s and everyone else were able to live “upstairs” in privilege. After this conversation, the Tethered escape and begin to kill anyone who is not one of them. The Wilson’s realize that they are the only ones that are able to stop their doppelgängers before it is too late.

Chris and Rose have decided that their relationship has finally gotten to the fun stages: meeting the parents. Rose invites her boyfriend upstate to meet her parents, who seem to act very odd around Chris. Rose’s mother is a psychiatrist who specializes in hypnosis and her father is a neurosurgeon. At first he just thinks that this is because Rose’s family is white and she’s dating a Black man, but as things progress he notices this isn’t the case. As the week goes on he notices that all of the “help” around the house are also Black, but they are all acting strange. Once the days progress he realizes that her parents aren’t acting strange just because they’re in an interracial relationship, but for a reason he never imagined.

Starr Carter lives in Garden Heights and attends a predominantly white, private high school. Even though she goes to such a high end school she is definitely not from money or privilege. After going out to a party one night with her best friend, she runs into her childhood best friend and former crush, Khalil. When driving home Khalil gets pulled over and he is told to exit the car. Starr was always told to respect the police and keep his hands hidden to avoid escalating the situation; Khalil wasn’t taught the same and leaned in to grab a hairbrush. When he leaned in, the police officer panicked thinking he was grabbing a gun and shot him dead. Throughout the remainder of the movie, Starr has to decide if she wants to go on trial defending Khalil’s actions and claim he was innocent to get justice for him and all of the other Black men who were wrongfully shot and killed. Even though she wants to defend Khalil she knows that her reputation at her high school is at stake. All of her friends assume that she is from the same city as them and comes from money and that she didn’t grow up in the ghetto. After facing this pressure from both sides of her community, she must decide to stand up for what’s right.

Chiron is a young Black man growing up in the 1980’s in Miami. This movie highlights his young adolescence, mid-teen and young adult self. Chiron grew up with a drug addict mother who often neglected him. In his childhood, Chiron was often bullied along with his friend, Kevin. Throughout the movie it highlights the pain, struggle and conflict that Chiron goes through while falling in love and exploring his sexuality.

Kathryn, Mary and Dorothy all work at NASA together as the brains behind the project to launch an astronaut into orbit during the space race in the 1960s. Katherine has been a mathematician since she was in school, her success in math has been able to help her land a job at NASA. The three women work in NASA’s Colored Computer Division. In the race to space their male colleagues cannot seem to solve a math calculation, Katherine has been sent to assist. After being hired to help, the culture shock in the new department begins catching up to her. Her fellow colleagues purposely ignore and try not to listen to her advice. Many of the men try to make her job more difficult than needed. This movie is important because it shows not only the difficulties of moving forward as a Black woman in the workforce, but also showcases how essential these three women were to this historical event.