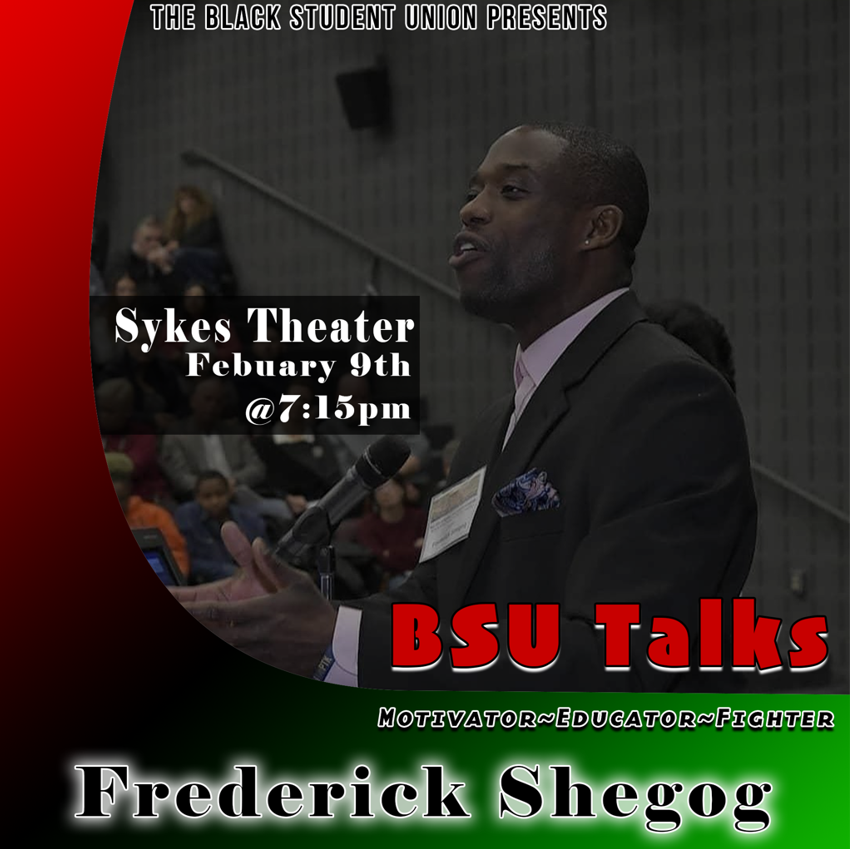 West Chester University’s Black Student Union (BSU) held its first BSU Talk of the semester last Wednesday, Feb. 9, with fellow student Fredrick Shegog as the presenter. Shegog, known as Freddy by his family and friends, is the founder of The Message LLC — his own motivational speech company that books events across the country.

During his speech, Shegog noted how he went from being a drug-addict eating out of a dumpster, to a WCU student on his way to graduating with his own company. In a powerful moment, he detailed a day in his previous life — he was homeless and begging for money when a woman spit on him and threw change at him. He said he was almost thankful that it happened because it reminds him of what life was like when he chose to not be sober.

Now, Shegog has been featured on television on FOX29 News, has delivered a handful of keynote speeches, plans to attend graduate school, and is scheduled to speak at colleges and high schools across the United States.

After becoming sober, he worried about getting into college as he didn’t have a resume. Knowing he had a great personality and a gift for communication, his girlfriend (now wife) told him, “Freddy, it’s not about what you got, it’s about who you are.”

While Shegog is enjoying his speaking career, he wants to get a graduate degree in public relations so that he can change the system to help kids like him — who grew up into poverty with a single parent and mental health issues. He noted that Black people are not the ones making decisions when it comes to school funding, and he wants to change that.

Shegog noted that because of his experiences, he is often the only speaker at events without a completed undergraduate degree, but he does not let this undermine his skills. He used to be apprehensive about situations where he did not feel qualified enough to speak. But then, he got the following advice from his neighbor: “stop praying for blessings, start putting yourself in the position to receive them.” Now, he states, “I walk in there like I own the place.”

He wants students around the world listening to him to think the same way and to put themselves in a position to succeed despite their backgrounds. He reminds us “there is a stigma in this world about addiction and mental illness. Let today be hope for someone struggling. It is not how you start; it is how you finish.”