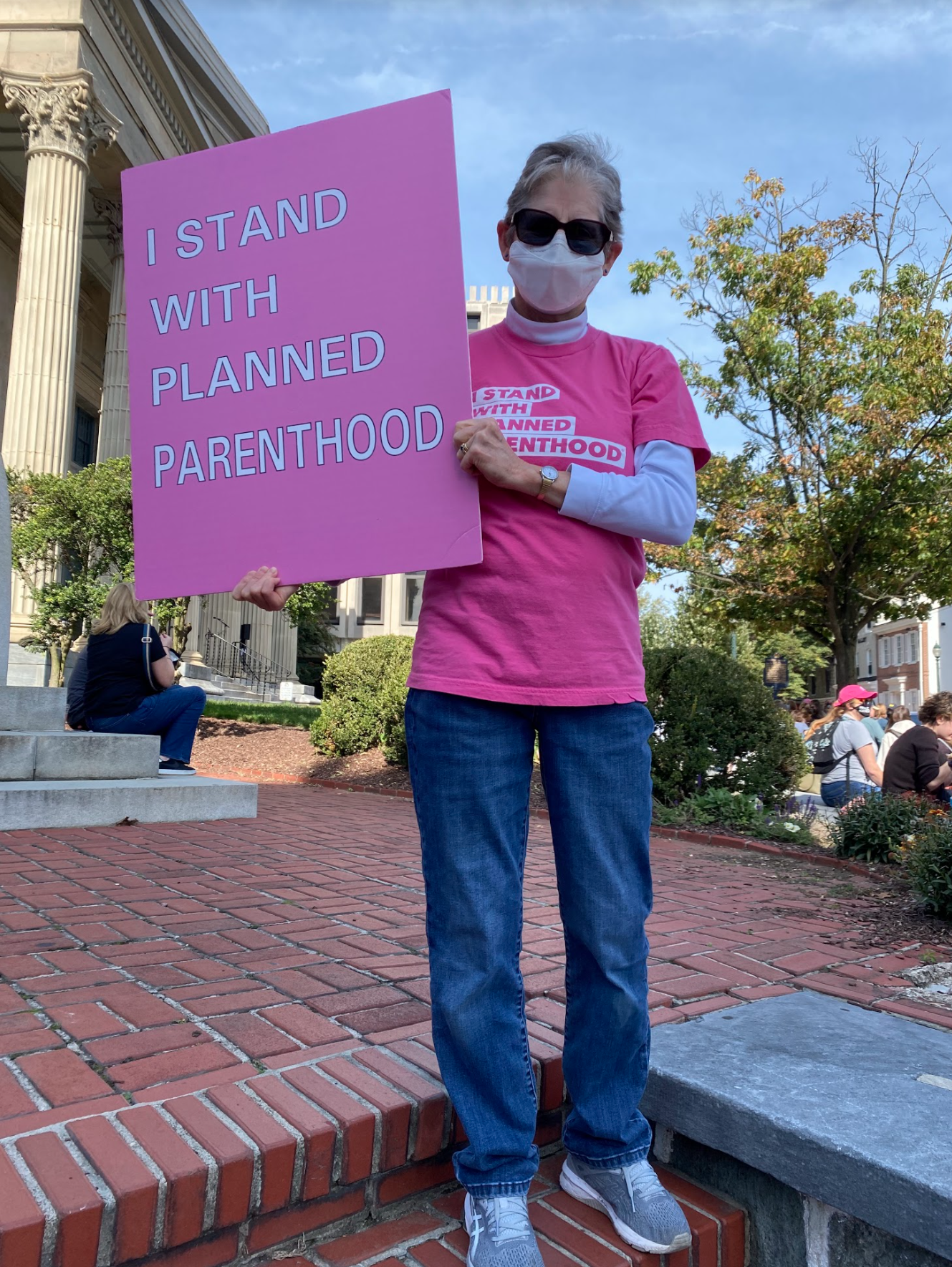 On Saturday, Oct. 2, 2021, members of the West Chester community gathered on the steps of Chester County’s historic courthouse. Carrying homemade signs and donning t-shirts with slogans such as “No Uterus, No Opinion,” people of all ages, genders and races came out to support the reproductive rights of all people.

Beginning late in the morning, ralliers for the Women Marching Forward event showed up to let their voices be heard, largely in response to Senate Bill 8, the new Republican-created bill which was just passed in Texas, prohibiting abortion after six weeks.

A direct blow to the landmark Roe v. Wade case, which legalized abortion in 1973, the bill essentially makes abortions for Texans entirely illegal, as most people would not even be able to tell that they were pregnant that early.

The West Chester event was hosted by Chester County Marching Forward (CCMF), a group started in 2017 as a response to local women coming together, fighting for change and generating pushback against then-President Donald Trump’s administration. Though our nation elected President Biden in 2020, the group decided to continue their fight as the rights of marginalized communities continue to be threatened.

The local march held in West Chester was a part of nationwide Women’s March events which took place the very same day. The goal across the country was to raise awareness, spread knowledge, hold leaders accountable, and demand action and tangible change.

Following Texas’s passing of Senate Bill 8, the official Women’s March group reached out to Dana Wainstein, a member of the CCMF leadership team and co-leader of the school committee, asking if she would be interested in hosting the march in Chester County.

After accepting the role, Wainstein explained that it was a matter of pulling together the event in just a few weeks. Reaching out to colleagues such as Dianne Herron, West Chester’s district representative, and Tara Haarlander, another member of the CCMF leadership and school committees, the women jumped in and began trying to secure speakers.

“A lot of people told us no,” said Wainstein. “We reached out to OB-GYNs, nurses and social workers…so many of them said no because they feel targeted. This was a really difficult rally to get speakers for because of the nature of the topic, because of the shaming that on behind standing up for abortion rights.”

The organizers recognized that this is a reflection of a greater issue and contributes to the very reason we need these sorts of events in the first place.

“It’s not even just the topic of abortion that’s so sensitive, it’s all of the other things that go into [reproductive rights]. Abortion is just one layer of reproductive rights,” Haarlander added. “And reproductive challenges that are faced that people don’t understand so they don’t want to talk about it.”

Despite the difficulties, Wainstein, Haarlander and the rest of CCMF were able to gather a group that was eager to speak to and on behalf of the people who are having their rights stripped away.

“We were just trying so hard to make this a completely intersectional event,” explained Wainstein. “Because this doesn’t just affect white women, or Black women or Muslim women. It affects every human.”

By the time the event officially kicked off 11 a.m., the Courthouse Steps and the block leading up to them were filled with people. Some came in groups and some came alone, but all were there with the intention of advocating for the rights of those in the community, and the country as a whole, who have the potential to become pregnant.

As the clock chimed to ring in the hour, attendees grew quiet and turned to the Courthouse to listen to the first of nine speakers, which would include people such as representative Danielle Friel Otten and Rabbi Elyse Seidner-Joseph.

Through poetry, music and personal anecdotes, the crowd of marchers were brought together by the words of the speakers and their urgency for protecting all people’s rights to their own bodies.

“Teens have sex! They should be able to do that safely,” shouted Rabbi Seidner-Joseph during her speech while addressing the protection of children and the lack of resources provided to that vulnerable demographic, garnering avid hoots and cheers from the crowd.

By the end of the event, which closed with an emotional poem from Juliet Lubwama, the National Student Poet for the Northeast region, the rallyists had witnessed the support from their community as well as their leaders and representatives, all of whom are united in the fight for reproductive justice.

In addition to motivation, marchers were given flyers and other literature which encouraged action steps, such as contacting our state Senators and signing petitions, in order to keep the momentum for the movement going well beyond the gathering that took place that morning.