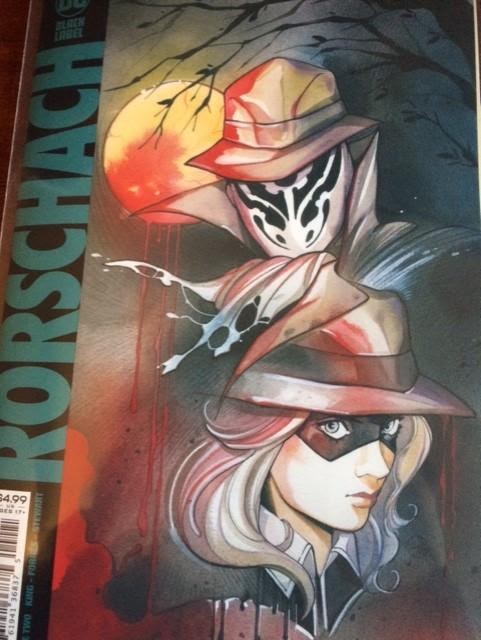 “The comic succeeds in escapism and depth but lacks in progressing action.”

Hello, fellow readers, to another comic review which I will be discussing the second comic on D.C’s “Rorschach.” For those that have not read the first comic, I suggest reading it prior to this review. Based from my previous review, the comic stars a lone detective as he tries to uncover the hidden mystery of Rorschach. Though the viewer does not know the name of the lone detective or Rorschach, it is understood that there might be a suspect tied to the Rorschach case.

After reading the second comic of “Rorschach,” I noticed that there were many positives. For starters, the story has better depth to the plot. Unlike the first comic that gives broad details and overview, the second comic builds off what the first left off. Another positive is the artwork. Halfway through reading the comic, there was a point where I felt like I escaped into the comic world based on seeing a drawing of a comic. The third positive is that the comic has a major theme throughout. In contrast to the first comic, the second comic’s theme leans more towards conflict. The last positive is that the comic does a good job in setting up the beginning and end to correspond to the actual apartment to symbolize the detective’s investigation.

Other than the second comic’s positives, there are several negatives that I notice throughout. The first issue is that the comic still leaves unanswered questions about the detective’s case. Some questions that came into my mind were: who was the detective talking to before and after his investigation, and why in the artist’s apartment and not at the crime scene? Another issue I have with the comic is the main character’s profession. Though I enjoy a good detective comic, I am still uncertain as to what particular role the detective actually plays in the comic. Is he a good guy or just some expendable individual that awaits his death? The last issue I have with the comic is that the comic has too little action. Though the first comic sets up the action, the second comic dials down on action and moves toward inner conflict. As a comic and action film fan, action is the best way to grab the attention of the viewer, but as I read the second comic, there are some parts that had action but not enough to capture the attention. Despite its flaws, the second comic is a success.

Overall, the second issue of “Rorschach” did a fantastic job with depth, artistry, drama and escapism, but lacks in deep action. For that, I give this comic 3.9 out of 5 stars. ‘Till next issue, this is Nicholas Bartelmo signing off from Cinema Perception.