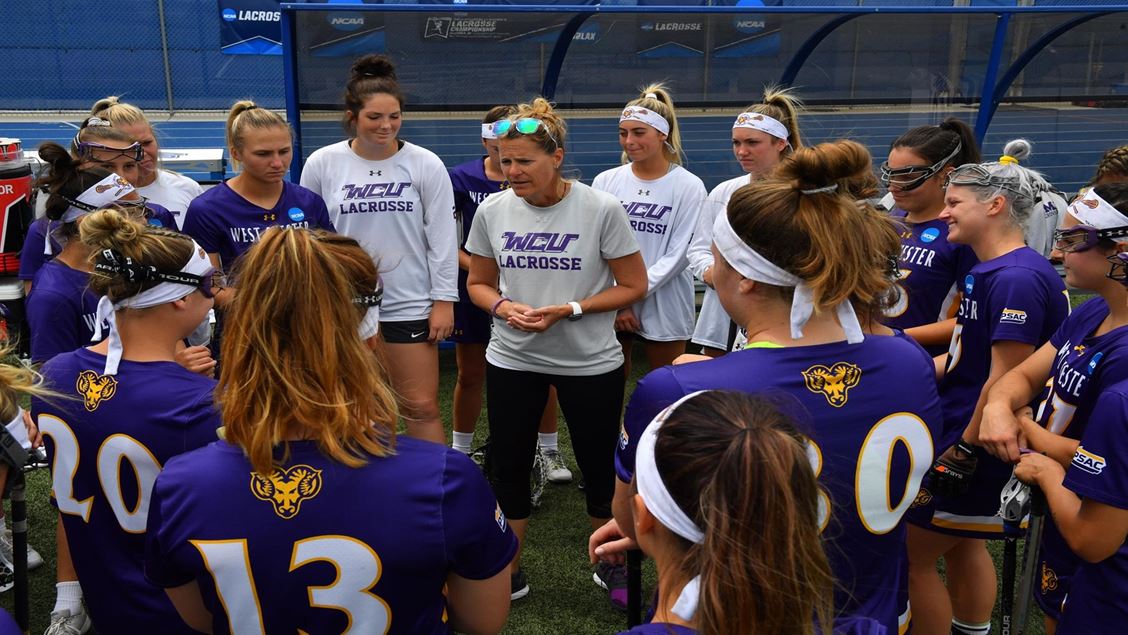 The West Chester University lacrosse team were looking to prove themselves last spring after finishing as runners-up for the National Championship in 2019. Sadly, after starting strong with a start of 2–0, the season was cancelled due to COVID-19. Currently, the 2021spring season hangs in the balance as there is uncertainty that West Chester will play any sports this school year.

Head Coach Ginny Martino is hoping for the chance to return to the National Championship game for the eleventh time in her career. The longest-tenured coach at West Chester as well as in the PSAC, in 22 seasons Martino has led the lacrosse program to two national championship crowns and 13 conference titles. Her coaching record is currently sitting at 333–77, which happens to be seventh place in all levels of NCAA lacrosse. In the 2018 season, Martino coached the Golden Rams to an undefeated season and a PSAC championship before leading the team to the NCAA title game in 2019.

Q: After coaching the program to one win short of a National Championship two seasons ago, were you confident your team could return to the big game before the season was cut short last spring?

A: As always, our dreams were to go deep into the postseason. We had a very talented and experienced group returning from the season before. The season started off well with us going 2–0 before we had our season cancelled. We cannot dwell on the “what ifs” but instead need to focus on the upcoming season in whatever form that may take and do the best we can. We are just anxious to get together again as a team and just enjoy each other’s company. It’s been a long time.

Martino also commented on her faith in the university:

“I believe we will be able to get together for athletic activities this spring. I am confident we can keep it safe for all involved. We are an outdoor sport, so we will use the space to our advantage to maintain a safe distance and make sure there is limited contact. We will be closely following the protocols and procedures put into place by the NCAA and monitored by our AT department. The safety and well-being of our student athletes is always our number one priority.”

One player who was on both of those 2018 and 2019 teams is fifth-year attacker and three-year letter-winner Tatum Altman. An offensive force since her college career started in 2017, Altman is close to becoming just the sixth player in school history to reach the 100 goal and 100 assist mark. In the only two games last spring, Altman scored eight goals and dished out five assists for 13 points. During the 2018 spring season, Altman had an incredible 54 goals while scoring 82 points total in 20 games.

I asked Altman about her confidence level at the beginning of last season:

“My confidence… it was just there. I mean, I don’t think there is anything more motivating than a loss in a National Championship. Combine that with it being my senior year, I wasn’t going to let anyone or anything get in our way — well, except the pandemic, of course.”

When asked about if the team was set to dominate:

“Yeah, which I say in a very humble way. We lost seven starters, but it didn’t feel like it. The underclassmen stepped up and did what they needed to do. We were very well-rounded, selfless and all 31 of us were on the same page, which is very rare.”

Altman shared her feelings in regard to the spring season being cancelled:

“I’m the type of person that’s like ‘Okay, this is the situation, how are we going to move forward/what are we going to do next?’ But there was no moving forward. There was no next. It was ‘We’re done playing, and that’s it.’ So in all, I think I had a plethora of reactions. I was sad, angry and felt helpless. But overall, I really just felt like it was such a shame for my team to have to go through (as well as every other team). We just worked so hard every day, and for us to not get our chance to showcase our abilities and compete for a National Championship was just a shame for me to watch and have to go through.”

Another integral veteran member of the squad is fifth-year defender Molly Reinhart. Reinhart is one of the best defenders in the country, ranking in the top five among active players in caused turnovers with 101. A two-year letter-winner in her own right, Reinhart was All-PSAC First Team in 2018 and Second Team All-PSAC in 2019. She is a clutch performer, forcing seven turnovers in the 2019 PSAC semifinal and five turnovers in the 2019 NCAA semifinal, both victories for the Golden Rams.

However, Reinhart’s experience last season differed from a lot of others:

“I tore my ACL in early February, about a month before the season was cancelled. Due to this injury, I was not going to be able to play for the rest of the season. Being a senior and tearing my ACL was absolutely devastating. I struggled a lot with coming to terms with never being able to play lacrosse again. When the season was officially cancelled in March, I have already gone through the emotions of losing a season since I had torn my ACL about a month prior.”

“Although the cancellation of the season wasn’t the reason my season ended, I was still heartbroken for all my fellow teammates. I knew exactly what they were going through and how they were feeling. I was initially very hesitant to play a fifth year, but when I found out some of my fellow seniors would be returning it seemed like an amazing opportunity.”

Reinhart discussed the meaning of this potential spring for herself and her fellow fifth-year teammates:

“It would mean everything to be able to play this spring. Losing the National Championship was heartbreaking, and everyone on the team could not wait to have another opportunity to accomplish our goals. Many of us, especially the fifth-years, have put their lives on hold to play another season of lacrosse. That right there shows how important lacrosse and playing this spring is to us. I think we all appreciate lacrosse more than ever right now and want nothing more than to have the chance to make a run at the National Championship.”

For updates on the WCU lacrosse teams and other sports, visit www.wcupagoldenrams.com.

Tyler Grace is a fourth-year economics and finance major. TG885739@wcupa.edu