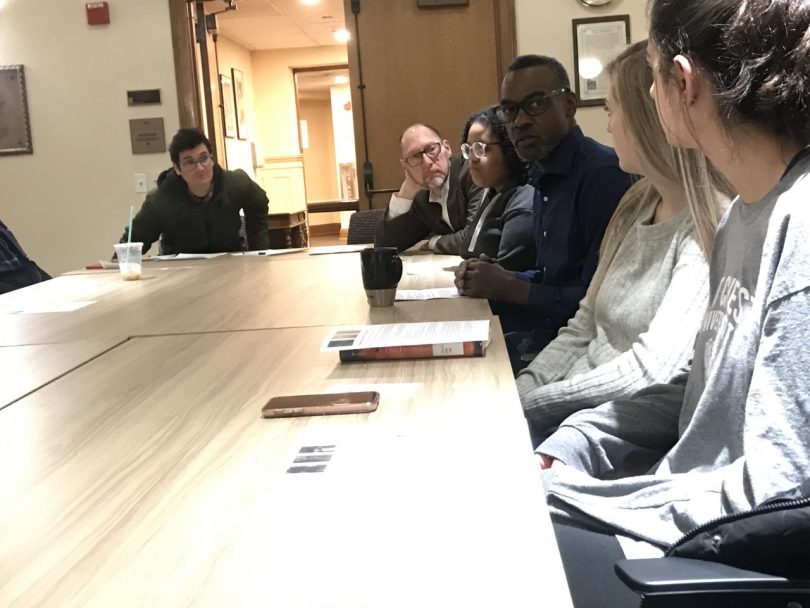 Last Thursday, two dozen students, teachers, alumni and West Chester community members gathered in the lower level of Phillips Autograph Library for a short symposium titled “Can We Listen About Race?.” The gathering, organized by the West Chester University group United to End Racism, served as a community response to the results of a survey done earlier this year on the racial climate at WCU. The goal of the event? Simply put, to listen.

Wednesday’s event put the attendees themselves at the center of the conversation, a common theme among UER events, which seeks to create an anti-racist community though peer support.

After some brief introductions, the group was led through the general philosophy of United to End Racism by co-leader of UER-WCU, Dr. Michael Burns. “There’s definitely structural oppression that exists, but it’s individuals that hold those structures up,” said Dr. Burns, “and so while ultimately the whole goal of liberation has to do with broad structural change, we don’t actually get there unless we’re in the correct mindset to imagine those relationships on a personal level.”

Following this introduction and a few words by UER co-leader Dr. Ellie Brown, attendees split into small groups, each led by a UER member. These groups were structured less as conversations, where statements could be referenced and responded to, and more as a safe and trusting environment in which attendees could process their experiences with racism without fear of judgment or misunderstanding. The stories shared reflected the diversity of backgrounds and experiences of those telling them, casting a light on the pervasive impact of racism on our community.

One participant described the fear they experienced as a person of color during the buildup to the 2016 election, citing Donald Trump’s rally at the university as a particularly scary time. Others recalled racism shown towards peers and friends both at WCU and in their high schools and home communities.

Each story was met with an understanding smile and an occasional prompt or reaffirming statement, gestures marked with a steady assurance that the speaker was being heard.

After the small groups, participants had the opportunity to share their experiences with the rest of the room before Dr. Brown and Dr. Burns concluded the meeting.

While the event did not focus on a specific guest speaker or other outside material, it was no less informative than if it had. The act of listening and the comfort of being listened to fostered understanding and vulnerability between those present. “What we want to try to do is offer correct information to disrupt the way that pain interferes with how we think about ourselves, in terms of making better choices in the way we interact with other people in the world,” said Dr. Burns about the purpose of the gathering and the grander goal of UER.

Dr. Brown hoped the lessons of the event could be applied to conversations about race in the broader WCU community. “I think racism is also held in place by painful emotions,” she said. “Part of the point here was to share strategies for listening to one another so we can process the painful emotions and be able to think more clearly about how to build relationships with each other and take effective action toward ending racism, so I hope there’s something about the insight of that that people will take away from this event.”