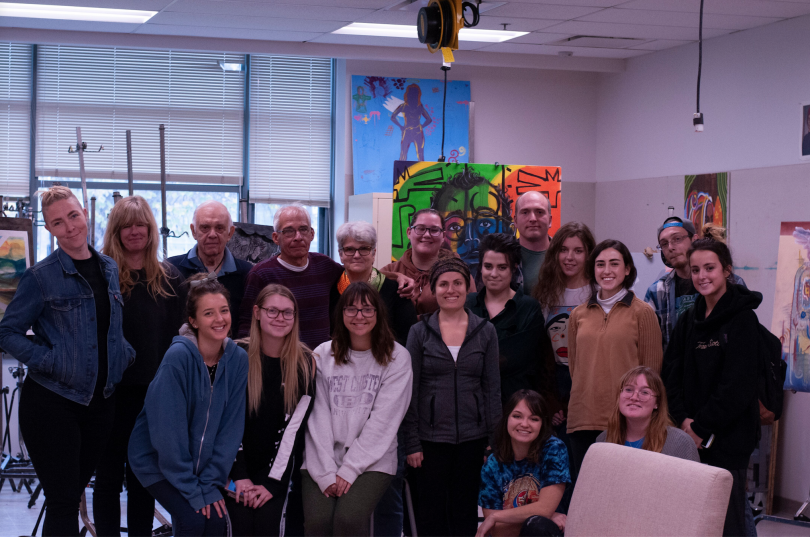 Meg Day, an assistant professor of English and Creative Writing at Franklin & Marshall College, expresses this powerful statement: “I’m Deaf, Genderqueer and still alive.” Day is the recipient of many poetry awards, attesting to the fact that they are a skilled and highly talented writer.

Just as midterms had begun to creep up on me and the stress of wanting to maintain a good GPA set in, I received an email from my French professor, Madame Roxane Petit-Rasselle, offering extra credit encouraging those who possess a curious mind to attend a roundtable discussion. The roundtable was started by professor Gloria Hernandez, and it was a coordinated initiative between the ASL and the French programs. Intrigued and graciously accepting any opportunity to better my grades, I decided it was in my best interest all around to go. Not really knowing what to expect, my friend Grace and I entered the room and waited for the event to begin. As I sat there in anticipation mindlessly filling the moments with idle conversation, I had no idea that I would leave nearly in tears, feeling so vulnerable yet so intensely inspired.

In the beginning, more generalized questions were asked at first to break the ice, though the entirety of the conversation was fairly heavy. The hour resembled a whirlwind in the sense that the audience, and even those who were speaking, were all unsure of the direction the conversation would take or how fast the topics would be explored, but surely cyclical and consuming. Day answered questions about them being bilingual and deaf, exploring what it means to be a French speaker and deaf, to be an English speaker and deaf and to be fluent in the sign languages of both. The conversation continued on into them being genderqueer and deaf, and how that has come into play with being French. “French feminism has the roots for modern day feminism,” said Day, inspiring the conversation to continue on about the messages within art.  Praising Nancy Rourke for their work, Day “enjoys the politicizing of art into a new genres.”

Day was asked, “What ways would you suggest to get students to become engaged in poetry that is political when they do not want to be involved?” Day answered that they liked to “teach things with topics in it that may be uncomfortable to the class members aiming to shock them, which may not take much.” Day praised Joan Larkin’s “‘Vagina’ Sonnet,” for it explores the tension between male and female poets in the 1970s, breaking away from the stereotype of what poems should be. Day stated that, “The poem is easy to teach because it is very clear and to the point,” and added that they “introduce students to that poem because of its form, as it digresses from the traditional ways of poetry,” inferring that sonnets traditionally involve themes of love.

Day went on to say that, “It isn’t hard to relate to, as most people in the room have a penis or vagina, so they understand the dynamic, or at least in part. After introducing something so shocking to your students, you can teach anything, be it comical poetry or prison-type poetry, students feel they have more ownership over the poem.”

“It is productive because professors can teach what poems have in stake: can males swing their d*cks around in the poems still? Have things changed? Then the conversation can be brought into what is happening in the present day, evolving into political poems about Donald Trump, or about wars.”

Jesse Waters, director of WCU’s poetry center and friend of Day, then added, “When you talk about [the] role of society, American poets are left alone. This act of leaving the poets alone, we must ask, does it take power away from them? Throughout schooling, students have been told that what they think about a poem makes no difference, what the teacher says is what matters. After being treated this way, why would students trust professors when they get to the collegiate level? Professors ask students what they think and feel — giving students a sense of empowerment opens a door to everything.”

To end the roundtable discussion, the floor was opened to students to ask questions and one student asked Day, “What inspires you to write poems?” Meg said, “We all have a handful of obsessions in our lives, they act as wells you can drink from for a long, long time. Obsessions should be embraced. I mean, at the end of the day, why would you try to avoid yourself? How do you not let your muse consume you? It is underrated, let yourself be consumed.”  Waters agrees, saying, “It is the only way to get to art. The only real sense of art is self-obliteration, where you are reduced to tears. You don’t have any semantic sense but you have intuitive sense, a visceral reaction. It is sublime, it is beautiful and it is terrifying.”

Nearly a month later, Day returned to the university for “Painting and Poetry,” which I had the pleasure to sit in on. The event involved associate professor of art Kris Bendedict’s students and their art. The event was vastly different from the roundtable, and catered to each individual student. Students were encouraged to use Day’s book, “Last Psalm at Sea Level,” as inspiration for their work. Students showcased their work, allowing feedback from one another and Meg’s perspective.

For some background context as to how Day became involved with West Chester University: in fall of 2018, Day was asked by Cyndy Pilla, the planning and logistics manager of West Chester University’s Arts and Humanities College who oversees the Poetry Center on their behalf, to participate in West Chester University’s Fall Poetry Salon. The Poetry Salon is an intimate gathering of West Chester students and community members alike who all retain an adoration for poetry. Pilla discovered Day and was excited to share their work among the community and with some encouragement from Jesse Waters, director of WCU’s poetry center, Day accepted. Day’s reading was so highly praised that they were invited back this fall as the poet in residence.

Meg Day’s next and final appearance for fall 2019 will be an open reading at 7:00 PM in West Chester University’s Francis Harvey Green Library, Tuesday, Nov. 19.

Sabrina von Ahrens is a third-year student majoring in English with a double minor in French and Linguistics. SV915865@wcupa.edu

This holiday season is a fantastic time to get the gamer in your life what they want the most. Whether it’d be the new “Call of Duty” or just a PlayStation Plus subscription card...

Every year, we have seen new titles, lots of new gaming content and so much more. One thing that always has kept its consistency in the gaming world is the world-renowned first...

In the past couple of years, Bungie, better known as the developers of the iconic “Halo” trilogy in the 2000s, have been making gaming news headlines. With the release of their...

How does one even begin to describe the life of Fred Rogers, who was such an icon—not just in children’s educational television—in modern American history? Well, the good news is...

Photo by Lee Holmes. Zeke Goody is a man who likes to make observations. He says he likes to pass time “living and observing life,” and one of the observations that he has made is...

When I first came into contact with Marcelyn’s music, it was being featured heavily on Temple University’s “The Basement Show,” a now-defunct radio show started by Brittany Rizzo...