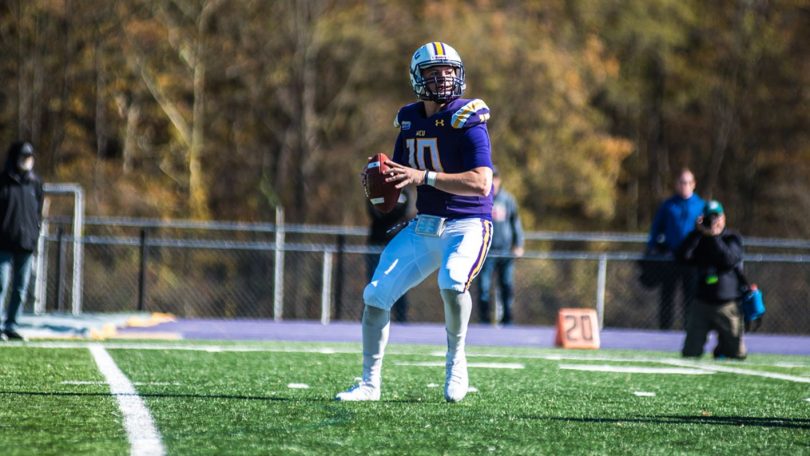 West Chester (8-2, 5-2 PSAC) remains hopeful for a bid to the NCAA Division II Playoffs while Lock Haven drops to 1-9 overall and 0-7 in the league.

The Golden Rams scored the first 42 points of the game, opening up a 35-0 lead by halftime and never looked back. By the time Rosario caught his third TD of the game on West Chester’s opening drive of the second half, the visitors were way out in front and in control of the game at 42-0.

Lock Haven’s Kyle Knight ran 68 yards for a score and caught a 13-yard pass for another, but it was too little too late for the home team.

Ja’Den McKenzie (Morton, Pa./Springfield) rushed for a team-high 109 yards, including a six-yard TD run midway through the opening quarter, and Phil Poquie (Philadelphia, Pa./Haverford School) scored a pair of rushing touchdown to ignite West Chester’s rushing attack, which picked up 213 yards on the ground Saturday while scoring four times.

Rosario finished the day with five catches for 98 yards and the three scores. He caught a 20-yard TD strike to open the scoring in the first quarter, then caught a 44-yard toss from Dooley in the second quarter that put the Rams up 28-0. Dooley also added a 13-yard run for a touchdown in the third quarter, accounting for five TDs in the game.

West Chester concludes its regular season next Saturday at home against California (Pa.) at John A. Farrell Stadium. It will be Senior Day for the Golden Rams as they honor graduating seniors on the football team, the cheerleading squad and within the incomparable marching band. Kickoff is set for 1 p.m.