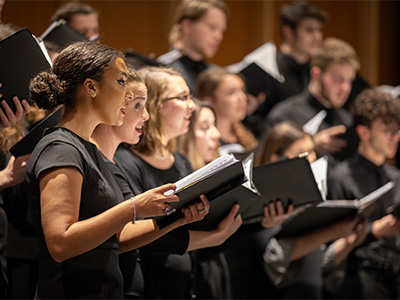 Photo by the Wells School of Music.

The West Chester University Concert Choir, WCU’s most select vocal ensemble, will perform their first concert of the semester this week, which will include a historic world premiere of James Cutler Dunn Parker’s “By the Rivers of Babylon” for choir and orchestra.

“I found [‘By the Rivers of Babylon’] about 35 years ago,” says Dr. David DeVenney, Director of Choral Activities at WCU and director of the concert choir, “and I didn’t realize at that time that it hadn’t been performed.”

DeVenney is one of the country’s premiere American choral music scholars and discovered a manuscript copy of the piece in the Library of Congress. “Maybe two years ago, I was back at the Library of Congress and I looked at this piece and made PDFs of it,” he says. “It was only after making the edition that I started looking at some things.”

Parker, while he was alive, taught at the New England Conservatory, so after having his interest piqued by the piece, DeVenney went there to do more research. “I went [there] and was talking to the two archivists and discovered that there isn’t another copy of it anywhere. If it had ever been performed, they would have had to print out vocal scores, and there are none.”

A world premiere of a new piece would be notable and exciting enough, but this piece isn’t new — Parker lived from 1828 to 1916, and while DeVenney believes “By the Rivers of Babylon” was written near the end of his life, that still dates the piece at over a century old.

“The interesting and neat thing for this concert is the [‘By the Rivers of Babylon’] world premiere,” says DeVenney. “It’s part of our heritage, but no one’s ever heard it in public, so it’s kind of a rarity and an oddity.”

“[‘Lamentations of Jeremiah’] is a famous piece that’s been on my to-do list for some time,” DeVenney says. “And then I chose [‘Seven Part Songs’] because I wanted to do something else by Parker, some smaller works along with the larger work.”

But concert choir isn’t the only vocal ensemble performing at this week’s concert. West Chester University’s Mastersingers will also take the stage, under the direction of Dr. Ryan Kelly and presenting the beloved classical composer Joseph Haydn’s “Mass in B-Flat Major.”

The pieces performed by both choirs make for a diverse concert, including music from three distinct periods in music history.

This first concert of the semester is Friday, Oct. 25, at 7:30 p.m. in the Madeline Wing Adler Theater of the Swope Music Building. Admission is free.