Coming Out Week at WCU 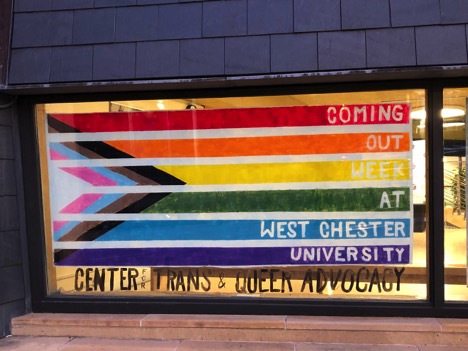 In 1988, National Coming Out Day (NCOD) was founded by Jean O’Leary and Robert Eichberg — two American lesbian-gay rights activists. O’Leary and Eichberg wanted to distinguish positive celebratory activism from the predictable reactionary efforts of anti-LGBTQ+ groups. The date was chosen because it was the anniversary of the 1987 National March on Washington for Lesbian and Gay Rights. In the spirit of NCOD, many higher learning institutions such as University of Michigan, University of Oregon, Temple University and West Chester University have chosen to sponsor a week-long celebration called “Coming Out Week!” This past week, WCU’s Center for Trans and Queer Advocacy hosted a multitude of events for their “Coming Out Week,” including movie nights, advocacy training, a drag brunch and more!

On Tuesday, Oct. 8 and Wednesday, Oct. 9, peer assistants to the Center hosted movie nights showed “But I’m a Cheerleader” on Tuesday, and then “Paris is Burning” on Wednesday. The American satirical film, “But I’m a Cheerleader” (2000), based in a gay conversion camp stars Natasha Lyonne and Clea Duvall. “Paris is Burning” (1991) is, no doubt, a film which anyone who wants to be an advocate or anyone within the LGBTQ+ and POC communities must watch.

“Paris is Burning” places itself in the golden years of New York City drag-ballroom culture in the mid to late 1980s. The film centers Black and Latinx Trans people who shed harsh light onto the high rates of hate crime, brutality and murder which they are dangerously at risk to experience. These hate crimes and murders have endured all the way to 2019. The Human Rights Campaign reports the deaths of 19 transgender individuals — almost all of them un-closeted, Black Trans Womxn. If you call yourself an advocate for LGBTQ+ and POC communities and haven’t seen this film; you must educate yourself and watch this remarkable piece of documentarian work. Both films are available on Netflix, Hulu or Amazon.

On Wednesday, Oct. 9, a training was hosted by director Tiffany Gray and graduate assistant Chris McCullough. Individuals who attended the meeting introduced themselves. The group was comprised of many faculty members and a few students, including myself. In the beginning of the session, the importance of a shift from ally-ship to advocacy-ship was established. Gray related this to the Center’s own name change from LGBTQA Services to the Center for Trans and Queer Advocacy (CTQA).  This new distinction happens to be a matter of feedback from both former and current members of the WCU LGBTQ+ community. The Center’s updated belief has to do with the connotation that advocacy implies — which is a wider acceptance and activism for multidimensional identities and life experiences that are related to gender identity and sexuality. An activity the group was asked to do was a partner Q&A.  One of the most poignant questions was, “Do you believe WCU is a safe place for Trans and Queer people? Why or why not? Please elaborate on why you chose why or why not.” My teammate and I decided that context and identity play a big role in whether a space can be considered safe or not. We cited the fact that Sykes seems like a generally safe space with the presence of the Multicultural Center, CTQA and other student fronted organizations.

The group consensus ruled that safety is in the eye of the beholder, that it depends on one’s ability to “pass” as cis-heterosexual and, finally, depends on the context of climate and culture. Further training focused on strategies to employ effective advocacy. To attend a training or to learn more about the CTQA visit their page on WCU’s website located under Student Affairs.

Though “Coming Out Week” and NCOD celebrate pride and display an act of advocacy for LGBTQ+ folx — there are some considerations that need to be addressed. As presented by scholar and radical feminist Adrienne Rich in her 1980 essay titled, “Compulsory Heterosexuality and Lesbian Existence,” the need to come out only exists due to the societal construction that heterosexuality is the norm and that homosexuality is divergent from that norm. The framework of this social construction also latches onto gender identities and sexualities outside of the normalized realm of romantic, sexual, cisgender and binary, such as Trans, Non-Binary and ACE. Another consideration related to coming out rests on the presence of other marginalized identities in conjunction with gender identity and sexuality. An individual or group that is exceptionally marginalized like Black Trans Womxn may find it safer to stay in the closet rather than risk their lives to violence, criminalization and homelessness. Therefore, a hierarchy of privilege exists even in the celebratory face of coming out. As an advocate and/or member of the LGBTQ+ community, these considerations must be taken seriously to ensure further acceptance and protection of these individuals.

In order to see lasting change, individuals must make an effort to maintain advocacy past NCOD, Pride Month and other awareness periods. A few steps for year-long action are to vote and pursue personal education. For both state and federal elections, an individual should educate themselves on the most progressively aligned candidates for LGBTQ+ folx. Personal education includes any form of research most accessible to an individual. This could mean browsing the local library, finding credible internet sources on topics such as identity terms or speaking with a friend or family member who identifies themselves as part of the community. Be mindful when asking an LGBTQ+ individual about their experiences — these individuals are not required to educate you on their community or identity. Cheers queers!