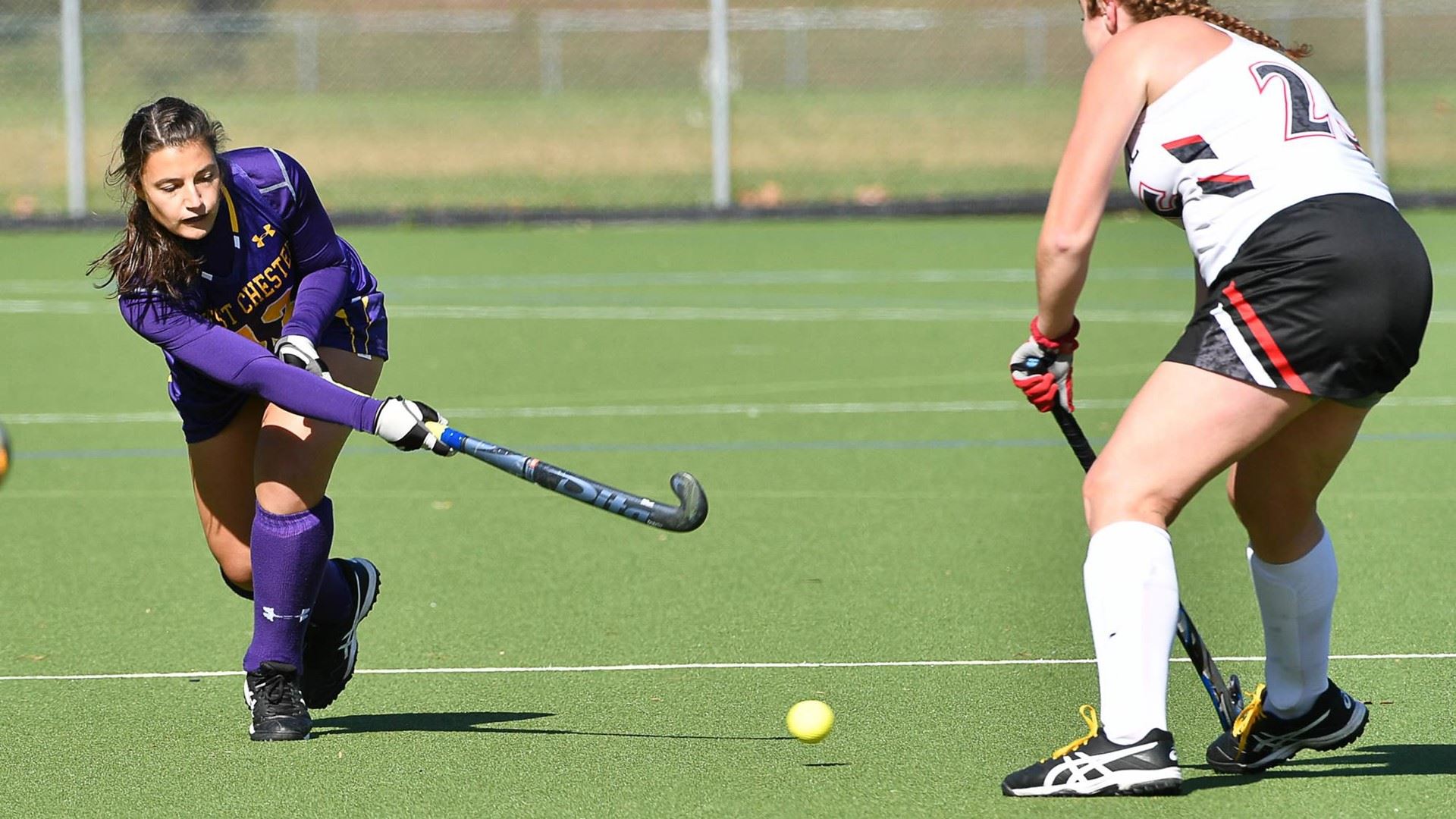 On Saturday, the No. 2 Golden Rams of West Chester (4-0) and the No. 10 Crimson Hawks of Indiana University of PA (4-0) squared off in a marquee matchup at Vonnie Gros Field in West Chester.

Being back at Vonnie Gros for a home game was important to the team’s morale. “This was our first home game after a few on the road, so we were excited to play,” said head coach Amy Cohen.

The excitement was apparent. As the national anthem came to a close, the West Chester team sprinted off the field leaving IUP in the dust and never looked back. It was this type of energy that was important to the Golden Rams early season success. The Rams try to bring this intensity out every game.

“When we play our game, we treat every game like it’s a National Championship,” said senior forward Katie Thompson.

IUP came into the game recording three straight shutouts against their previous opponents as a top-ranked team.

“A key factor in beating another ranked team is just to forget they are even ranked,” said Thompson.

IUP’s strong defense would only hold up for the first period — a period in which West Chester dominated the time of possession. It was early in the second that the Golden Rams were able to break the scoreless tie, when Thompson found the net for her third goal of the season. She didn’t wait long to add her fourth goal, as the Rams went up 2-0 with halftime approaching.

Despite IUP’s strong defense in recent matchups, it was West Chester’s defense that came up strong. IUP didn’t record its first shot on goal until late in the second period.

Across the board, West Chester dominated the first half of this game and were able to make an early statement to their No. 10 nationally ranked counterparts. West Chester went into the half outshooting IUP 7-2 and with a 2-0 lead.

During the second half of the game, the Golden Rams continued their dominance over the Crimson Hawks.

“I thought we adjusted well in the second half,” said Head Coach Amy Cohen.

Within the opening minutes of the third period, senior forward Kat Roncoroni scored her fourth goal of the season. This advanced the Rams lead to 3-0. The Golden Rams’ stranglehold on the game got tighter and tighter, as the game progressed. They won both possession time and attacks on goal. Nothing was going to stop the dominant performance the West Chester team displayed.

With a minute left on the clock in the third, WCU senior Caitlin Kelly scored to put the Rams up 4-0. This not only stuck a dagger in the morale of IUP’s Crimson Hawks, but cemented that the Golden Rams are in a class of their own.

Catie McNamara got in on the scoring parade, finding the net in the fourth and made the score 5-0.

The Crimson Hawks were simply no match for the WCU team. “We knew who the better team was, we just needed to go out there and prove it,” said Katie Thompson.

This game showed that Golden Rams are a lethal force with playmakers on offense and defense. The Hawks were a ranked team and came off strong performances. They were not to be taken lightly, and the Rams sent them back to Indiana, PA with a brutal loss.

The Rams will go on the road to Greensburg, PA to face Seton Hill University for their next game, where the Golden Rams will look to continue to put the rest of the PSAC on notice. Not only will the PSAC be watching, as this team performs like the No. 2 nationally ranked team. Seton Hill is looking to score their first win ever over the Golden Rams, and the Rams are looking to continue their dominant season with another win.

Dan McCartin is a third-year student majoring in management with a minor in journalism. JJ844004@wcupa.edu

Juliana McKee is a third-year student majoring in MDC with a minor in journalism. JM886634@wcupa.edu

Hannah Barras is a third-year student majoring in communications. HB888984@wcupa.edu

Allison LaBella is a student at West Chester University. AL863643@wcupa.edu

One thought on “WCU Field Hockey shuts out undefeated IUP”