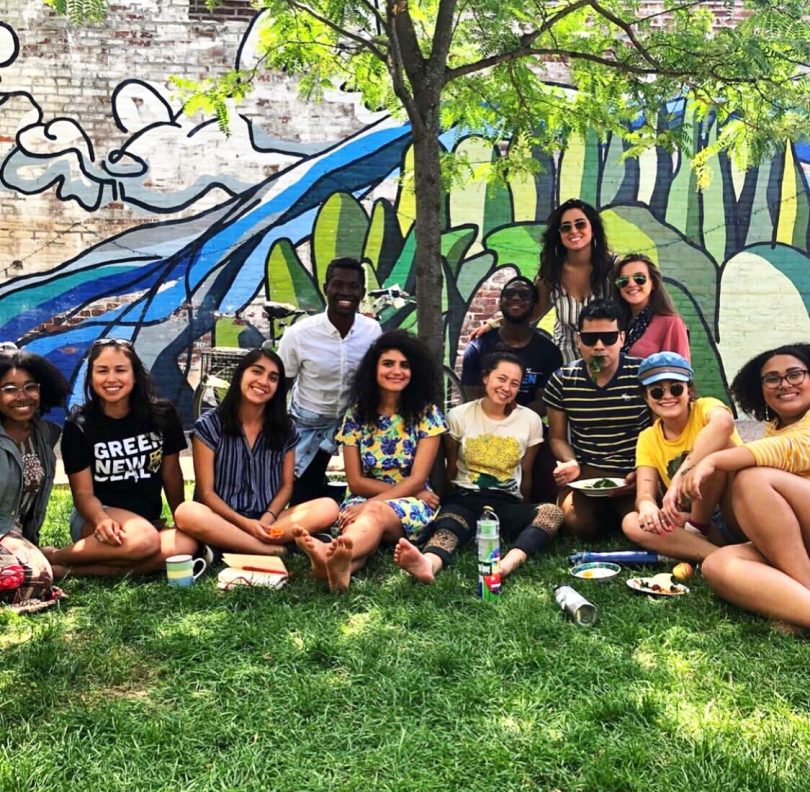 My transfer to a new college outside my home state of Alaska was a leap of faith for me. Living away from where I grew up is an adventure that has expanded my faith in the power of community.

As a new student, I was encouraged to attend the student involvement fair. The fair was on a hot fall day, and I wandered around picking up information packets from various booths; but I only made one connection that resonated with me – the Sunrise Movement, a youth-led organization designed to stop climate change and create millions of good jobs in the process.

While attending my first Sunrise Movement meeting on campus, I found myself nervous and quiet. I didn’t know anyone, and I was still getting used to the new lifestyle. The people I met through Sunrise had only been inviting, caring and courageous. One very enthusiastic student, Jeremy, inspired me to stay involved and continue fighting for a sustainable future for all. Jeremy now works full-time as a community organizer for the Sunrise Movement.

This organization addresses the social, economic and environmental injustices everyday people face. Sunrise Movement has developed many exciting initiatives to engage communities across the nation. This grassroots organization is represented by everyday people including students, construction workers, artists, teachers and beyond.

This organization connects with my core values. The values of life, family, and our environment; all of which are priceless. As an Alaskan Native Unangan, I grew up appreciating nature and the lifestyle it provided for my family back home in the Aleutian Islands. Our culture is reliant on the ecosystem and has been for thousands of years. We live a subsistence lifestyle and live largely off the natural resources provided by Mother Nature, consuming only what we need. Our way of life is being threatened just like every community across the globe from the     impacts of climate change. According to local Alaskan reports by Anchorage KTUU, a mass die-off of tufted puffins and other species of seabirds is occurring on the shores of the Bering Sea islands. The local Director of the Ecosystem Conservation Office said: “The Unangan have successfully co-existed with the native species of the area and are particularly sensitive to drastic changes like the puff die-off. It was very devastating. It’s never something that somebody wants to see—a bunch of dead animals on their shorelines. It’s something that immediately drew attention to the fact that something was wrong in their ecosystem – in this marine ecosystem – that Unangan have co-existed in forever. The Unangan grow more concerned as the pristine ecosystem in which they’ve thrived for generations shows signs of breaking down.”

The report mentions that many scientists agree this disaster is due in large part to warming ocean temperatures – a product of climate change. Furthermore, the increased ocean temperatures drive schools of fish to colder waters; thus impacting those who rely on them as a source of survival. I fight for climate justice for my family and the next generations of the Unangan people.

Since my involvement with Sunrise Movement, I’ve been connecting with people in the community, including candidates for local office. These individuals stand with Sunrise’s principles and have participated in several community events, including the “Forum for Our Future,” a round table discussion with youth and local officials. Sunrise Movement West Chester hosted a Green New Deal townhall on campus during this past spring semester. The townhall was part of the national Green New Deal tour raising awareness about the urgent need for climate justice.

In 2019, U.S. Representative Alexandria Oscasio-Cortez submitted a resolution to Congress called the Green New Deal, in recognition to the duty of the federal government to create robust climate justice policies. The Green New Deal is a collaborative resolution co-sponsored by various environmental groups like Sunrise Movement, 350.org, Sierra Club and many more who mobilize around a collective vision for climate justice.

Climate change, pollution and environmental destruction have made it worse for the systemic racial, environmental and economic injustices by disproportionately affecting vulnerable frontline communities. This transformation will invest in renewable energy manufacturing in the U.S. by building or upgrading to energy-efficient, distributed and smart power grids, as well as ensuring affordable access to electricity. A Green New Deal meets 100 percent of the energy demand through clean, renewable, zero-emission energy sources. This transformation will revolutionize our technologies to include solar, wind and tidal power and transform our transportation to zero carbon emissions. The Green New Deal also includes plans for farmers and ranchers to remove pollution and greenhouse gas emissions from the agriculture sector and promote sustainable farming in naturally occurring ecosystems.

We can all participate in the Green New Deal’s mobilization at every level through the appropriate training and education. The Green New Deal strengthens and protects the right of all workers to collectively organize and unionize in the name of climate justice. A Green New Deal is an ambitious framework for our future vision; however, it is also the minimum.

In May 2019, I participated in a Leaders of Color training hosted by Sunrise Movement. I’ve never felt so much hope for our future. The leaders came from all around the nation from the Bay Area in California, Kentucky, Florida, the Carolinas and Boston. This training is one of many that Sunrise Movement puts together to connect over 200 different hubs across the nation. These trainings build the momentum for climate justice to be implanted in our society. When I started to see the community built around climate justice, I realized the power of the people;,especially when the people organize. The ability to participate with people from different walks of life has been inspirational. I pledge to continue the revolution for climate justice as voiced in the Sunrise Movement’s mission statement, “For the air we breathe, the water we drink and the places we call home.”

Sarah Stepetin is a fourth-year student majoring in biology. SS916452@wcupa.edu

We’ve been more than just college students this semester: we’ve been protesters, advocates, politicians and community leaders. Even though the work is never done to keep raising...

Today, a Golden Ram entered the White House as First Lady of the United States of America. @DrBiden earned her Master of Education from WCU in May 1982 🐏🇺🇸💜