Improv-ing the mood at West Chester 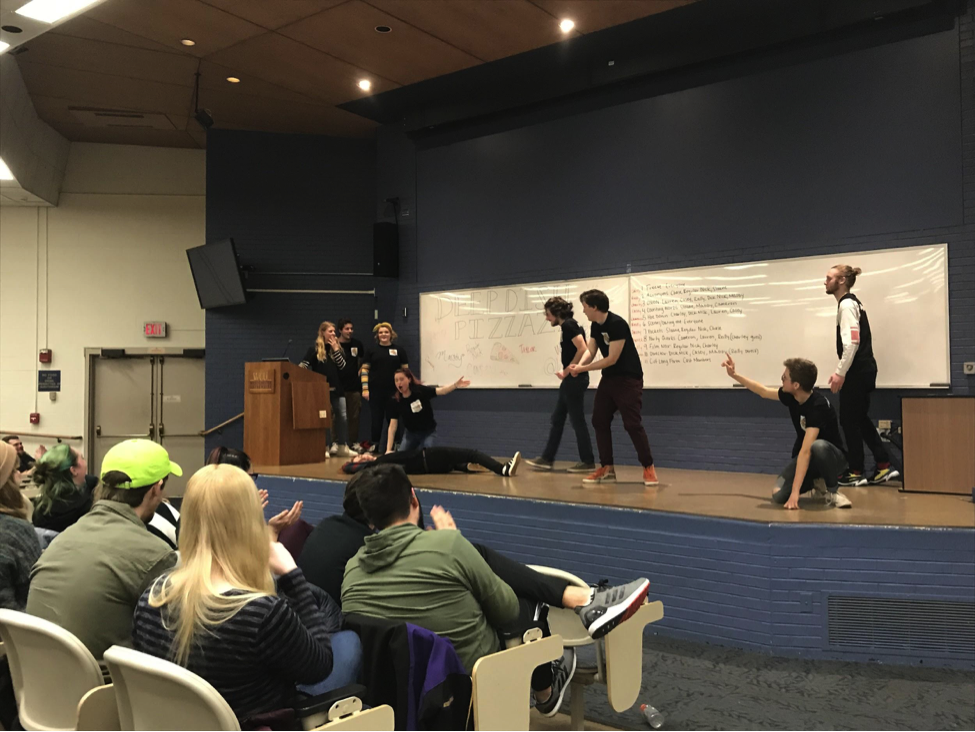 West Chester’s improv team, Deep Dish Pizzazz, kicked off the semester with their first show last Thursday. More than a hundred students and community members gathered in the Main Hall first floor auditorium for an hour of hilarious games acted out by West Chester’s finest improvisers.

The first show of four planned for this semester started with a bang, the team charging into the auditorium to raucous applause. Casey Mellon emceed the first game, which had all members of the team acting in various scenes that could be “frozen” by members not in the scene, after which they replaced a member in the scene and continued from that member’s position. Sophomore member Maddy Conaway gave a stellar performance as a fairy with no regard for personal space before the scene was frozen and she seamlessly transitioned into another member’s overly protective mother.

From there, the night didn’t slow down, with scene after scene earning big laughs from the audience of fans and supporters. In one game, called “Onion,” five cast members built up a scene, one by one. Beginning with a monologue about dolphins by senior improviser, Reilly Kagen, the scene changed every time a new actor joined the stage. Casey Mellon transformed the monologue into a coffee shop scene where Kagen, the diligent barista, ground coffee beans by hand. Nick Matarazzo entered, crawling, into the scene and announcing that he was at the end of a lifelong journey to reach the most famous arcade in Denver. After all five scenes were developed and all actors on stage, the scenes were resolved one by one with each improviser exiting the stage in reverse order, leaving Kagen to finish his monologue. Matarazzo stole the show with his series of characters, playing in successive scenes an intrepid arcade enthusiast, a breakdancing dog and a man kidnapped by an overzealous nuclear family and brought to Texas for vacation.

Another highlight arrived with the next game, where three members acted out a scene in local sandwich shop, Jimmy John’s, but could only speak a number of words per line that was chosen by the audience. Improviser Sloane Mooney played the Subway-hating Jimmy John’s employee and could only deliver lines seven words long (“I have sandwiches ready here! Come eat!) while Maddy Conaway was stuck with only 3 words per line (“No! Go Subway?”).

The night’s best game, however, came at the very end, where the whole team built a story one scene at a time. Improviser Charley Bloomfield played Mr. Sir, the owner of a pizzeria overrun by human-size mice (Maddy Conaway and Casey Mellon). The series of scenes had the crowd in stitches, especially with the appearance of Reilly Kagen as the Hamlet-esque ghost of Grandfather Mouse.

The show ended like it started, with an outburst of applause and whooping.

“For a first show, I thought it went great,” said Kagen. “Just for us to come out and get the reception from people, felt really good. We saw a lot of regulars, we also saw some new faces which was amazing.” Kagen is one of a handful of members who are in their last semester at West Chester. “We’re gonna try to really go out with a bang, do everything that maybe we’re not comfortable with yet, really explore what it means to be a West Chester improviser.” Kagen spoke positively about the younger members of the team who are stepping up to follow the departing seniors. “The team has always been progressive, moving to a more open kind of vibe. When we leave, I think the team is going to be in great hands.”

The improv team’s next show is going to be on March 21 at 8 in the Main Hall auditorium and open improv will take place on Thursday, February 28. “It’s really a no-judgment zone, very relaxed, and it’s a great way to build confidence.