Shaky start to the season for men’s basketball 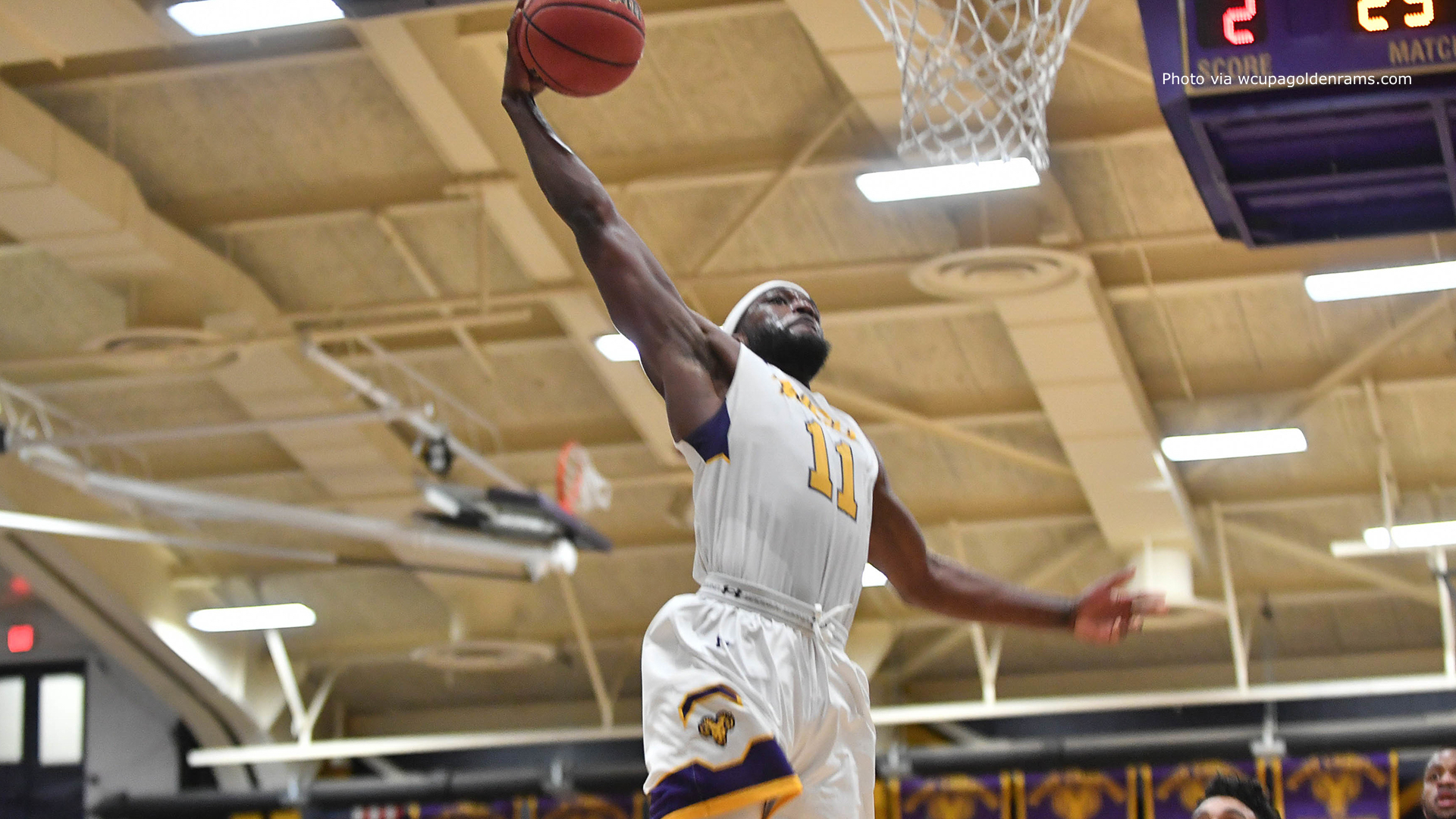 Photo caption: Fourth-year guard Frank Rokins (Plainfield, NJ / St. Mary’s HS) pictured flying in for a slam dunk against Edinboro University. Rokins finished with a double-double, racking up 17 points and 11 rebounds. He shot 8-11 from the field.

Following the first two weeks of the season, the West Chester Men’s Basketball team stands at an even .500 with a record of 3-3.

Their first games of the season came when they traveled to West Virginia to participate in the MEC/PSAC Challenge. They faced off against West Virginia Wesleyan and West Liberty University. Unfortunately, the team returned with a 0-2 record.

When the Golden Rams returned, they had to prepare for a Chestnut Hill team poised to take a win on the road. A sudden snowstorm pushed the game back a week later. When the Rams did get on the court, they followed their 0-2 start with a dominating victory over the Griffins of Chestnut Hill.  Led by guards Malik Jackson and Jackson Hyland, the Rams put up an impressive 107 points, opposed to Chestnut Hill’s 70.

The men would even their record at 2-2 with a 76-57 win over Bowie State when the Bulldogs visited Hollinger Field House. It was star player Jackson Hyland showing up again, leading the team to victory. He finished with a game-high 19 points and notched his 1,000th career point.

Two days after Thanksgiving, the Golden Rams traveled to Delaware to take on the Wilmington University Wildcats in a non-conference showdown. Coming in, West Chester had never lost to Wilmington. Both teams are familiar with each other and the game lived up to its hype. It ended with a close score of 68-64 in the favor of Wilmington, giving the Wildcats their first win against West Chester.

When the Golden Rams traveled to Philadelphia, they were able to storm back to defeat Holy Family 85-75. Once again, Hyland came up big, as he was able to score 20 points for the third time already in the early season. Fellow senior Frank Rokins also made his presence felt as he almost had himself a triple double. The all-around forward finished with 11 points, 12 rebounds and seven assists.

Last year, the men’s team finished with a total of seven losses. Six games in, this year’s team has found  themselves already with half the amount of losses as last year. It will be interesting to see how this team bounces back from their up and down start to the season. With a very good coach, a strong core and a strong freshman class, expectations are high this year. They found themselves in the NCAA Tournament last year and a quick turn around is needed to get them back there.

Maybe the return of team captain Matt Penecale will push the Golden Rams in the right direction. Penecale missed the first five games of the season due to an injury and made his return against Holy Family. With limited playing time, Penecale finished the game with two points, three rebounds and three assists.

Now that the non-conference schedule is over, it’ll be interesting to see how the team bounces back in PSAC play.

The team’s push to turn their season around will come against Williamson College of the Trades. The game is scheduled on Wednesday, Dec. 5 with a 7:00 P.M. tip-off at Hollinger Field House.