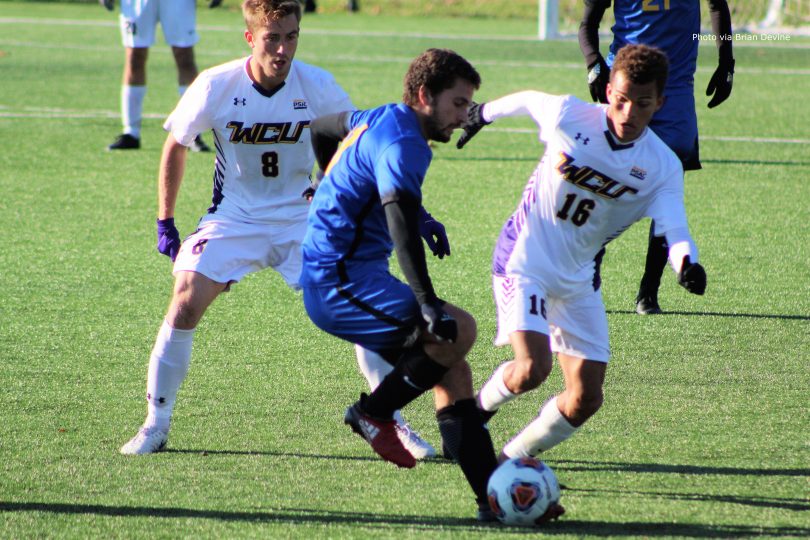 In a matchup of two highly ranked teams, the 13-2-5 Rams defeated the 14-4-1 Notre Dame (Ohio) Falcons by a score of 2-1 at Rockwell Field on Saturday.  Notre Dame’s quick and formidable offense presented a great challenge to West Chester, but the Rams persevered due to their aggressive game plan and a big day from second-year Stephen Thompson.

The Rams immediately attacked Notre Dame’s defense with a goal from Doug Goitia one minute into the contest. Thompson passed the ball to Goitia, who kicked it past Notre Dame’s goalkeeper Daniele De Angelis.

According to Head Coach Michael Benn, the Rams wanted to strike early because he thought Notre Dame would be rusty because they didn’t play a game in ten days.

“We had a heck of a start,” Benn said. “We came flying out and got the goal.” Benn added that the goal was important because it gave the Rams confidence and settled their nerves in an elimination game against a top-tier opponent.

Notre Dame responded 20 minutes later with a goal from David Torralba, who ranks fourth on their roster with six goals this season. Torralba used his speed and agility to get one by Rams’ goalkeeper Will Marshall and tie the game 1-1.

“They’re slippery, as I like to say,” Benn said. “They can really get you off-balance and go in either direction.”

With the game tied 1-1 at halftime, the Rams regrouped and came back firing to start the second period. West Chester threatened with back-to-back shots from Jason Pixley and Daniel Grindrod, and then scored seconds later on a goal from Thompson. Thompson capitalized on a tipped ball into the box and put it into the net. The goal was Thompson’s fourth of the season.

“It speaks to our guys’ character and mental toughness,” Benn said about how the Rams responded after halftime. “We don’t get rattled because we believe in each other.”

The Rams were unable to add to their 2-1 lead after Thompson’s goal, so it was up to their number one ranked defense to shut down Notre Dame’s dangerous attack. At the 55 minute point of the game, Notre Dame’s leading scorer Arthur Favero had a chance to tie the game with a penalty kick. However, Marshall made a diving save to keep the score 2-1.

“They had some unbelievably skilled attacking players,” Benn said about Notre Dame’s offense. “Their front four players—and even their players on the bench—are tremendously talented and good with the ball.”

Notre Dame had several other opportunities to score, including six corner kicks, but each one was denied by Marshall and the Rams’ defensive unit. It was the type of defensive outing that exemplifies why the Rams led the PSAC with a 0.65 Goals Against Average.

“They’ve been a great group all year without question,” Benn said about his defense. “If one guy makes a mistake, one of them is there to cover for them.”

The win was a rebound after the Rams’ previous game in the PSAC title match. The Rams tied Millersville 1-1 after double overtime, but they were outshot in penalty kicks 4-2.  The win against Notre Dame also advances West Chester to the third round of the NCAA bracket where they will face the undefeated Charlestown West Virginia University.

It will be a rematch of last year’s game that West Chester lost 3-0. West Virginia went on to win the NCAA tournament. The game will be played on the road, and the date is to be determined as of this writing.