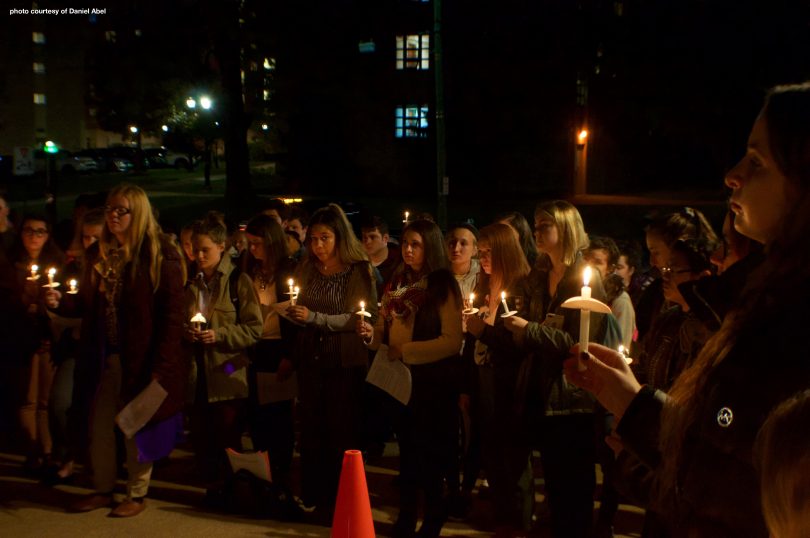 Last Tuesday, I had the privilege of taking part in organizing the vigil that Hillel put on at Sykes to pay respects to the victims of the Tree of Life synagogue shooting. It was a profoundly emotional gathering, but also cathartic for those feeling hurt and scared due to the massacre. It was especially meaningful that many gentiles attended a vigil for an attack on the Jewish people. In times like these, solidarity with those different than me is extremely valuable.

However, within hours of first hearing about the shooting, I saw distracting and downright harmful messages in various media regarding the tragedy. Tree of Life served as a reminder that antisemitism is still a real problem that we must confront. A reminder that Jews are still a scapegoat for extremists to justify oppression. A reminder that some people cannot simply coexist with whoever they consider the “others,” and that this can drive them to violence.

However, that was not the main focus of much of the discourse floating around the internet on Saturday. The issue of antisemitism was quickly shoved aside by the ever-present partisan issue of gun control.

Within a day of the shooting, the always eloquent president tweeted that the shooting wouldn’t have happened if there were an armed guard in the synagogue, and quickly backtracked when asked if he was advocating armed guards in all places of worship. This idea was echoed by opponents of gun control, attributing the defenselessness of the victims to them not having guns with them in the synagogue.

Similarly, proponents of gun control were quick to claim that this could never have happened if we had stronger gun restrictions. As if a terrorist would have not found a way to procure an instrument of violence if we expanded our background checks and limited magazines. A semi-viral post from David D. Williams had the audacity to say of the Holocaust survivor who died in the shooting: “Imagine that: Surviving the [expletive] holocaust, but not surviving the Trump administration.”

The knee-jerk reaction to bring partisan politics into the discourse on a Jewish tragedy immediately shifts the value of Jewish lives from inherently important to how they relate in partisan discourse.

Somehow the shooter, who criticized Donald Trump for being soft, globalist and “surrounded by [jewish slur]” on social media, was a direct product of Trump being president, and anti-Semitism simply wasn’t around in the eight years Barack Obama presided over a perfect, post-discrimination America. Even as rates of anti semitic assaults rose sharply in 2015 before Trump was even a candidate for president, according to the Anti-Defamation League’s statistics.

The knee-jerk reaction to bring partisan politics into the discourse on a Jewish tragedy immediately shifts the value of Jewish lives from inherently important to how they relate in partisan discourse. Liberals, who are skeptical of the general population’s responsibility over firearms, are using this as an example of proof, whereas conservatives, who too quickly think all violence can be deterred by the possibility of an armed defender, are using this to show how defenseless we are without guns.

Those who know me know of my bias in favor of unrestricted gun ownership, but neither my view on that topic or the antithesis of gun control are relevant here. We are not dealing with the gun violence that often occurs from heated arguments, robberies, muggings, police and domestic violence. This was a terrorist attack. Terrorists are not deterred by laws or the possibility of death as long as they can take lives with them before they get captured or die.

If tomorrow we had either extreme of gun ownership, if either all the guns were seized by the government or everyone’s second amendment rights were completely unrestricted, the shooter would still have his hate in him. He would still view me as a subhuman conspiring to send immigrants to take over the country, and he would still feel justified in killing me to prevent that. The issue here is anti-Semitism, and as long as it exists, regardless of how we deal with guns, anti-Semites will come after us and kill us.

If Jewish lives are to be valuable in themselves, as with any other identity, then we cannot distract ourselves from the core issue of intolerance towards our existence. In his book “Black Skin, White Masks, Frantz Fanon” criticizes the idea that his racial liberation is but a step towards the leftist ideal Sartre supports, that it is instead an end itself.

If a life is to have value, it cannot be degraded by being treated as an instrument to other political goals.

“I am not a potentiality of something, I am wholly what I am. I do not have to look for the universal. No probability has any place inside me. My Negro consciousness does not hold itself out as a lack. It is. It is its own follower.”

Despite the foundational differences of racial, religious or any identity-based hatreds, how we treat them in political discourse require the same recognition of the oppressed. If a life is to have value, it cannot be degraded by being treated as an instrument to other political goals. Instead, we must treat the hatred itself and teach people to be accepting of any “others.” It is not a political solution as much as a personal and ethical one, but it is a solution which maintains our dignity and worth in the face of tragedy.

Alexander Habbart is a fourth-year student majoring in math and philosophy. AH855541@wcupa.edu