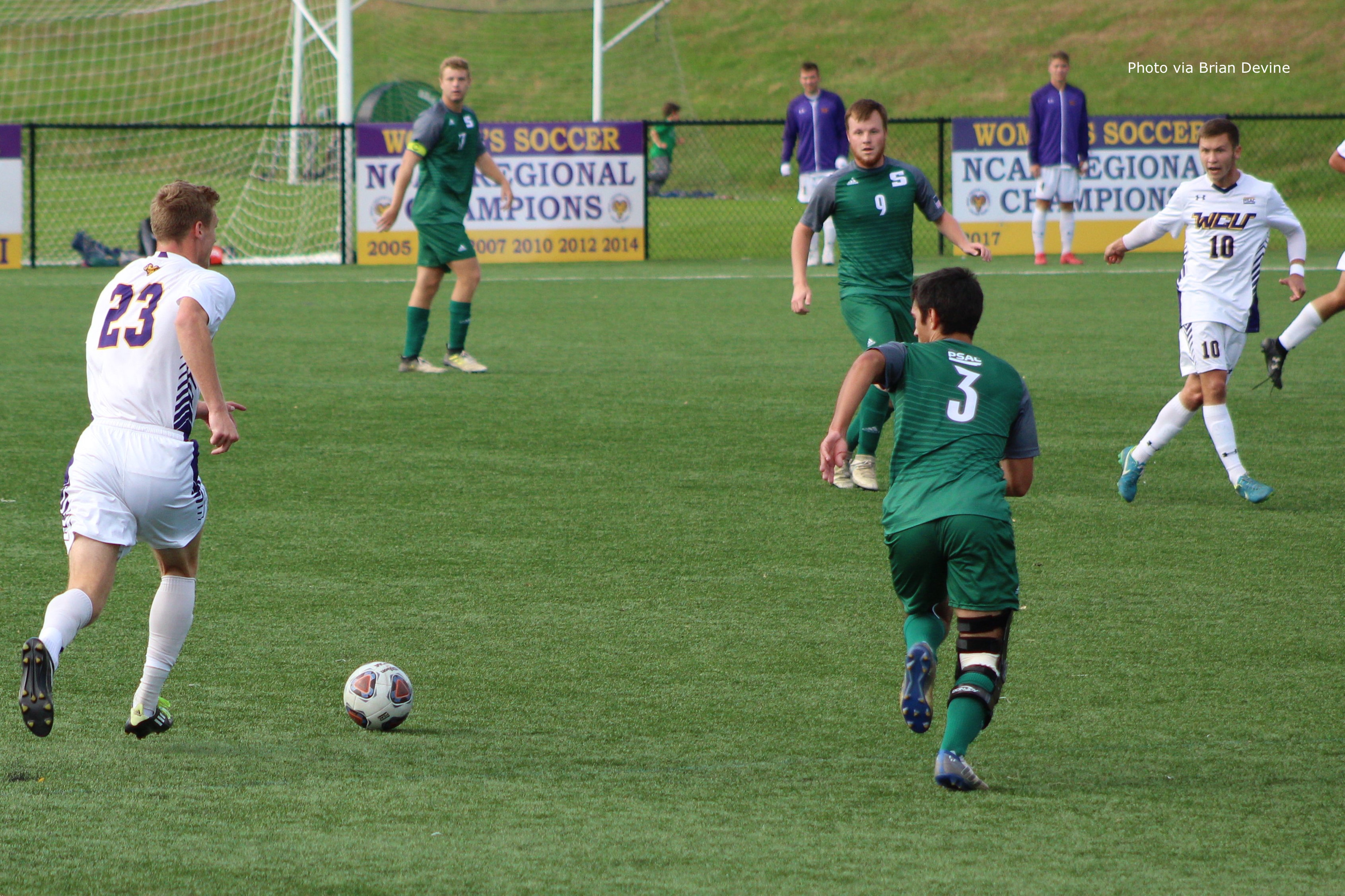 On Saturday afternoon at Rockwell Field, the Rams defeated Slippery Rock University 1-0. The win vaults the Rams into first place in the PSAC with a 7-1-2 conference record (10-2-3 overall).

West Chester’s defense silenced Slippery Rock’s offense the entire afternoon. The Rams only allowed seven shots on goal as they shut-out their opponent for the ninth time this season.

“We got a great backline,” said goalkeeper Will Marshall  about the team’s defense. “We don’t allow a lot of opportunities, and when we do, we sort it out.”

During the first half, Marshall made several key saves. He saved two shots from opposing midfielder’s Devin Hoffman and Justin Miranda within the first 30 minutes. Six minutes later, he blocked a header on goal from midfielder Hector Butcher.

“We did a good job not letting them get in a rhythm,” head coach Michael Benn said. “Our defending was pretty good.”

After missing several opportunities on offense, West Chester scored their only goal with a kick from senior Austin Slater. Senior Nico Meola set up the play with an assist.

“It wasn’t our best game,” Benn said. “But I think we did enough to win.” Benn was disappointed that the Rams didn’t add to their lead.

It was fitting that it was West Chester’s seniors who propelled the team to victory. The Rams celebrated Senior Day at halftime by honoring seniors Kyle Hoops, Sami Phelps, James Wood, Tyler Rapposelli, Andrew Slater, Jason Pixley, Nico Meola and graduate student Will Marshall for their contributions on and off the field.

“This senior class is a special group,” Benn said. “They embody everything we want in our student athletes in our program. They get it done on the field, and they get it done in the classroom.”

The Rams gathered on the field for the halftime presentation. The senior players walked onto the field with their parents by their side while the PA announcer listed each player’s major, and their greatest on-field accomplishments.

“It’s going to be a difficult class to say goodbye to,” Benn said. “And not just because of their impact on the field, but the impact on our program and our lives. They are really a bunch of special young men.”

Because it was Senior Day, Benn put in senior Goalkeeper James Wood midway through the second period to replace Will Marshall. Benn wanted Wood to get playing time in front of the home crowd.

“He was an all-league goalkeeper as a sophomore,” Benn said about Wood. “He deserved it for everything he’s done for this program.”

With eight minutes left in the game, Wood saved a header on goal. He then made another save on a kick from Kenton Keeslar with less than five minutes remaining to preserve the shutout and seal the victory.

“Thankfully, he made me look OK and kept the shutout for us,” Benn said about Wood’s performance.

According to Benn, Wood was physically unable to play for part of the year. Marshall stepped in his place early in the season, and Marshall leads the conference in goals against average at 0.56 and save percentage at 0.86.

“It’s a nice problem for a coach to have,” Benn said about having two standout goalies.

Marshall transferred from Pittsburgh to West Chester to get his teaching certificate. He hopes to teach social studies for grades 4-12.

“It’s a cool place,” Marshall said about West Chester University. “We got a strong program. I love to be a part of that.”

The Rams have two regular season games remaining. They play an out of conference match against St. Thomas of Aquinas on Tuesday, and then return to PSAC play against Seton Hall on Saturday.

A strong finish would enable West Chester to clinch a first round bye and home field advantage throughout the playoffs. The way the Rams have played in the past week gives them confidence heading into postseason play.

“We just finished four games in eight days, Benn said. “That is tough physically, mentally and emotionally. We came out with three wins and a draw. It’s almost as good as we could have hoped for.”