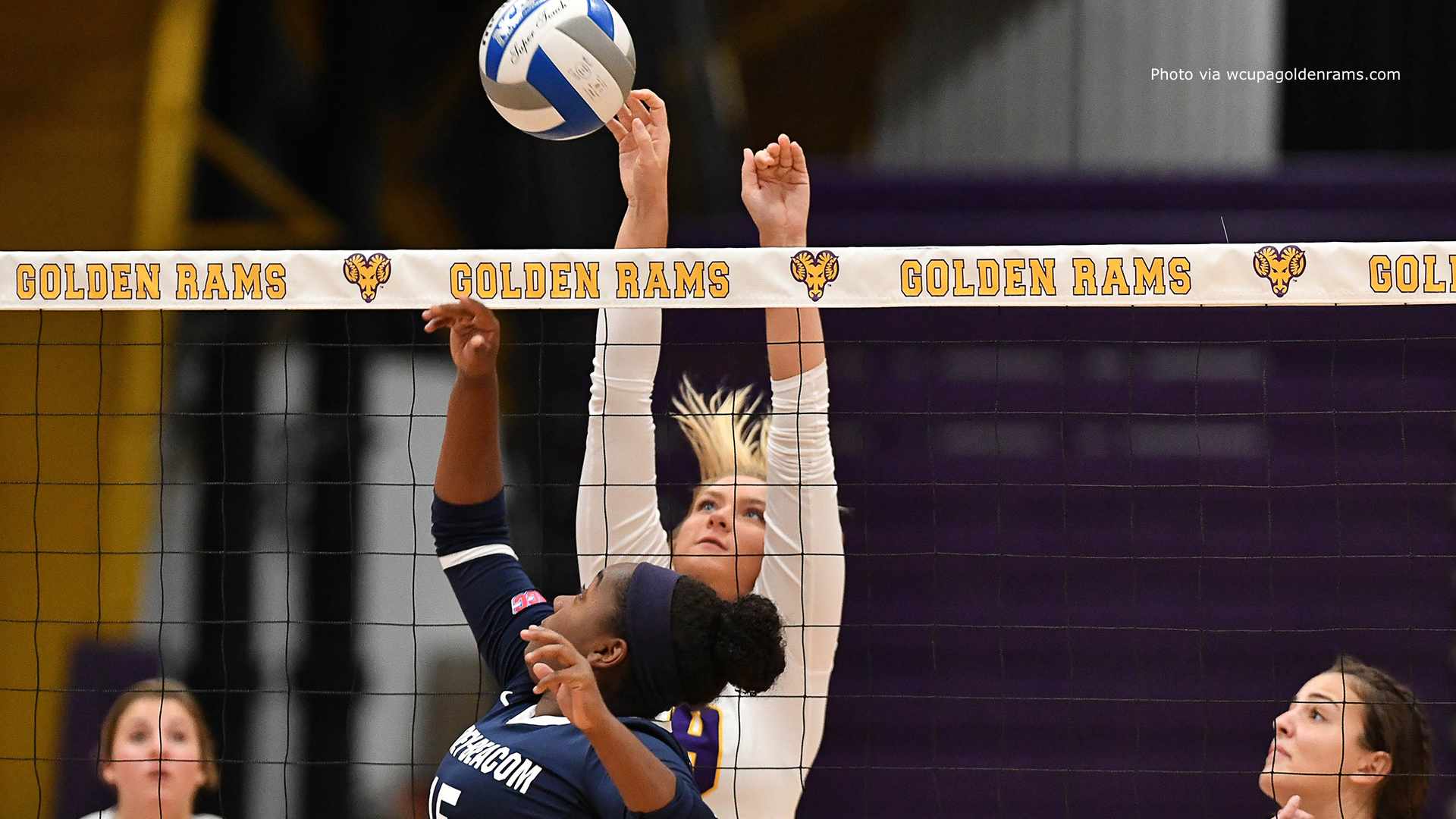 West Chester Volleyball had a two-day break following their hard-fought win at University of Pitt Johnstown, returning home to Hollinger Field House. The Lady Rams could not extend their winning streak past one game, as the visiting Shepherd University won in heartbreaking fashion (22-25, 13-25, 25-14, 25-23, 11-15). After falling behind two sets, the team rallied and won a challenging fourth set to push the match into an extra set. After being tied ten points a piece in the fifth set, Shepherd closed them out.

First-year Julia Vreeswyk led the team in kills with 18, continuing her strong offensive presence. Allie Duffy followed with 12 kills, with Grace Whitney placing third with eight. Second-year Megan Shaw, Alex Gleason and Nicki Yates each had an ace. Shaw also chipped in one assist. Whitney made her presence known on defense as she has all season, finishing with four blocks. Jillian Grammer shined in the loss, dishing out 43 assists along with 12 digs and a block. Nicki Yates had a well-rounded game as well, leading the team in digs with 13 along with seven assists and an ace.

When asked about what went wrong in the fifth set, Head Coach Kassie Bellaver had this to say: “The Shepherd match was a great match and, we knew we could play at a higher level than we did the first two sets. The fifth set was a toss up…the teams were tied at 10 and they outscored us in the end.”

When asked about the developing pattern of WCU having to play from behind, Bellaver said, “The team is still adjusting to playing without two of our starters and it is our goal to get ahead and stay ahead this weekend.”

West Chester had to wait until Friday, Oct. 12 to try and get back into the winning column when they traveled to Kutztown University. However, the 1-8 Golden Bears provided an upset of sorts as WCU fell in four sets (19-25, 25-21, 16-25, 20-25). A combined hitting percentage of .068 for the Lady Rams did not assist them in the loss, while Kutztown finished with a much more acceptable .194 percent. Some positives from this match are that WCU led Kutztown in the aces and blocks category.

Duffy went from second in kills in the previous match to first, as she led the team with ten. She also had six blocks. Rachel Robb had seven blocks, leading the team along with eight kills. Team captain Grammer stuffed the stat sheet in this one, serving up 36 assists and 22 digs, both leading the squad. Vreeswyk contributed seven kills and an assist, Yates contributed three assists and eight digs, and Emily Ahern chipped in seven digs.

The Lady Rams traveled the next day to East Stroudsburg to face a very strong Raiders team. They were promptly swept, dropping their PSAC conference record to 6-5 (20-25, 14-25, 21-25). East Stroudsburg was on their game, with their hitting percentage above .300 in the first two sets. On the other hand, WCU had a hitting percentage of zero in the second set. West Chester did not go down without a fight however, breaking 20 points in two sets to make  it close.

Vreeswyk once again led the team in kills with nine, followed by Robb and Whitney who each had six. Ahern, Grammer and Gleason each served up an ace. Duffy and Robb were the only two players to record a block, each with one. Grammer had 22 assists and 11 digs on the day. Yates led the team in digs with 16, she also had three assists.

Coach Bellaver had this to say after the two losses: “We are struggling offensively as a team. Our middles are doing their job but otherwise we cannot produce points and we are struggling to stay in system. Both teams served effectively against us and did a good job avoiding our libero, Nicki Yates. We will look ahead to next weekend and prepare to get back on track.”

West Chester Volleyball is now in the midst of a three-game losing streak, finishing the week with a conference record of 6-5. They will have a healthy week of practice to try and get back on track, as they do not have a game until Friday, Oct. 19. On Friday, they face off against Seton Hill University, and the following day WCU travels to California University of PA.