An interview with Miss WCU 2018 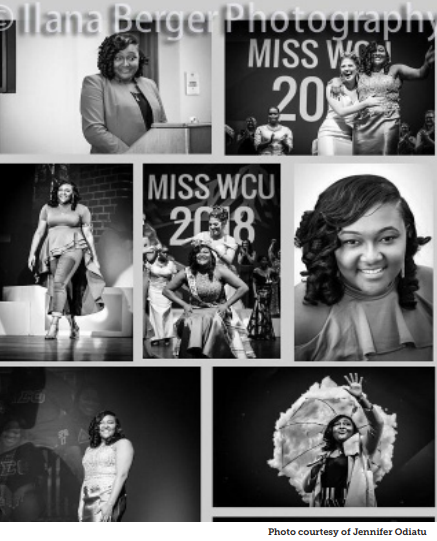 Jamie Thomas-McDowell, a Chester native majoring in communication studies with a minor in Spanish, took the crown with her talent, dedication and consistency on Feb. 3. Thomas-McDowell is involved in multiple activities throughout West Chester’s campus. She is the vice president of Delta Sigma Theta Sorority, Inc. (Rho Alpha Chapter), the Parent Orientation Leader of the 2017-2018 Leadership Team, Resident Assistant in Brandywine Hall, Abbe Society Member and a Black Alumni Chapter Mentee while receiving multiple awards and honors throughout her college years. Already balancing a busy lifestyle, Thomas-McDowell decided to take on the challenge of joining the Miss WCU 2018 pageant competition.

The process for her began when she picked up and started to fill out the application form, which consisted of questions of what her platform would be, why she wanted to be a contestant in the pageant, her involvement, favorite class, how her platform connected to West Chester’s college setting and a few others. A couple of hours before the pageant began, the contestants had to participate in a presentation (interview) to a panel of judges.

Before the competition began, her goal was just to get the experience of doing a pageant and not focus on winning. She wanted to make top five in the competition with the knowledge that she did a good job. For her, making top five was a great accomplishment in itself (and seeing how she represented herself very well.) Thomas-McDowell stated, “Winning was amazing. It was more than just a goal; it was an accomplishment that I never looked forward to doing. It was shocking to me that I won top five, but I also won the entire competition.”

She also believes that in order to be in a pageant, you should be confident with yourself. “I don’t believe anything else ties into confidence because if you know what you are doing and who you are as a person then confidence is key.” She goes on to give advice by saying that if anyone has issues about their character as a person, they can receive advice to figure out how to boost their self-esteem. Regardless, people will accept a person for who they are as long as they believe in themselves first.

A few moments into the preparation of the pageant, she noticed that it wasn’t any regular pageant.

“The competition was a challenge. We were told what to do, but you had to be on your own game if you wanted to win. If you wanted help, you had to ask for it,” she explained. Thomas-McDowell goes on to say that it prepared her for life outside of the pageant to seek help whenever she needs it in order to get the job done.

Upon receiving the honor of being Miss WCU 2018, Thomas-McDowell has taken the leadership roles of appearing at upcoming events such as Read Across America, Princess Tea at West Chester’s public library, Relay for Life and many more. While she isn’t required to do much in regards to her own platform, she does have to uphold the responsibilities of representing the university efficiently. Thomas-McDowell came out of the pageant with discipline to maintain the responsibilities of being a leader around West Chester’s campus on a daily basis. She also gained organizational skills and structure from this spectacular experience.

While wrapping up with the interview, Thomas-McDowell gave advice to anyone who is willing to take on the challenge of claiming her title next year: “When you get into the pageant, believe in yourself, read over all paperwork that you hand in, ask someone else to proofread it, utilize your Miss WCU mentor, stay competent with all the directions given to you and ask for clarification if you are unsure of anything. Keep your confidence up while believing in yourself.”