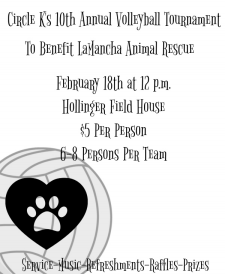 The West Chester Circle K club will be holding their 10th annual charity volleyball tournament Sunday, Feb. 18 at 11 a.m. in the Hollinger Field House. The cost is $5 per person with six to eight persons per team.

The day will start with team registration, then go into bracket style games. During the breaks there will be service projects, refreshments and a chance to win some great prizes.

“I think it’ll be fun to make a team and hang out with your friends and maybe make new friends,” said Circle K Service Chair, Gretchen Curry. “ . . . and you’re doing it for a good reason and I think that all together will be just a great time. And you get a free t-shirt!”

Every year the club chooses a charity to be the recipient of the tournament proceeds aligning with their yearly themes. This year the club voted for a local animal shelter, LaMancha Animal Rescue.

“We chose LaMancha because LaMancha is a local shelter, it’s the only one and it’s not a grouping of shelters,” said Curry. “It’s no-kill, and the people are very appreciative and love to talk to us and interact and I think just overall it’s nice to help all animals and especially ones that their lives will never be on the line.”

According to LaMancha’s website, “We are a privately funded 501c3 charity that was originally formed as an alternative to the slaughterhouse for ex-racehorses. LaMancha Animal Rescue is the only federally recognized Karelian Bear Dog Rescue. Today LaMancha rescues and finds homes for not only horses but also dogs, cats, goats and the occasional exotic animal that requires more space or specialized knowledge than most SPCAs can offer.”

A representative from LaMancha will be attending the tournament with a few of her furry friends from the shelter. Two service projects based on Circle K’s two themes are also being prepared for the event. The first will be making no-bake dog treats for LaMancha and the second will be making paint chip bookmarks for a local retirement home.

“I think people should come out because this has always been a really successful event, it’s a lot of fun and even if people aren’t into sports we have a lot of service events,” said Circle K member Alyssa Thomas. “I think it’s a really great way to bring our campus together and to see what Circle K is all about.”

Circle K is the largest student-led collegiate service organization in the world with 550 clubs on college and university campuses and 13,000 members worldwide. There are branches at other local universities such as Drexel, Alvernia, La Salle, Philadelphia University and the University of Pennsylvania.

“Circle K, to me, is where I made a majority of my friends in college, and it’s a place where we do good things with people we love,” said Curry.

The tournament is the club’s largest event of the year and they love making it happen each February.

“We all worked so hard for it and that it’s going to be so much fun . . . and all together I think it will be a great time for everyone involved,” said Curry.

For more information about the event please contact Vice President of the club Malory Gallagher at MG845311@wcupa.edu.

Erin McFeeters is a fourth-year student majoring in communication studies with a minor in journalism. ✉ EM857951@wcupa.edu.