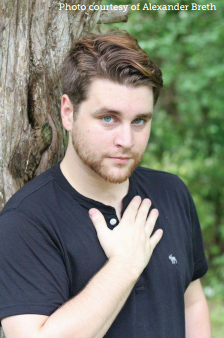 To contextualize this piece, there are two major points to accent. The first is that this is a stream-of-consciousness style piece that will be addressing subject matter that some readers will find offensive or disturbing at times. The second aspect to note is that this is ultimately a work of fiction, but has been inspired by true events. With these two things in mind, enjoy the first installment of “Schism.”

Why do we tell our stories? To better explain our lives or to preserve them?

I can’t begin to tell you why I’m writing. Or why I’ve ever written for that matter. It might seem that my intent here is one of a beguiling nature; but I assure you it is truly one of purposelessness. No matter how cathartic the telling of my own tales might be, I can’t escape the inexplicable feeling of emptiness—of myself reaching out towards a distant shore unable to reach it and instead drown in a river of my own sorrow and solitude. As its suppressive drops fill my throat, I finally feel the purpose I longed for my entire life. A burning desire; something to fight against. A named enemy that I can stand defiantly against.

I drown in more than sorrow and solitude, perhaps.

Yet, despite this urge to sink down, I fight. I fight constantly. Despite everything I’ve ever said, I’m scared. Every action that has brought me closer and closer to this moment has dwindled into the abyss and I am now faced with the reality. Now, when it matters most I fight. And if I falter…

Is this how you’ll remember me?

A legacy—a heartbroken boy who couldn’t face reality. The empty man who endlessly sought the problem inwardly for so long that he, too, believed he was broken.

Fighting against the void dismally against the odds that one day our goals might be achieved. That’s how they’ll remember her. A woman of passion who gave it all for her beliefs. We would all be so lucky, I suppose.

I long for that feeling.

The feeling of heroism, of martyrdom, of sacrifice. That, to muse upon it, I too might be worth something one day. That my fight will be worth telling to those to come, whether it be a cautionary tale or an epic poem, I just want to be there.

Remembered. Appreciated. Wanted. Yet, as I strive towards these goals, the further they seem to get away from me. I know.

I’m normal. I have nothing wrong with me, despite how much I want to be broken.

I want to understand you. I want–

I want to break. I need to break.

Maybe then they’ll remember me. Maybe then someone will love me.

I wish it was you. I do with all my heart. And it crushes me that you don’t know…

But that won’t be my legacy.

No, you’ll see soon enough how they’ll remember me. It won’t be glorious or for being a hero or for being a scholar. It’ll be for something completely stupid and random.

I thought being cultured would win me love. Another lie.

I destroyed everything I’ve ever cared about, and deep down that is the one irreconcilable truth of my life. That’s what you’ll remember me for. Arrogance, pride, ineptitude.

It has been three months since I last wrote and my life is irreparably changed. Two more friends lie dead by their own hands and here I sit bitching as I sip my coffee. The very embodiment of Mersault, no? Save here there is no Musa, no Arab, but simply a desire to belong again, alienated by my own self-loathing and doubt.

Listen, I know what you’re thinking. This is going to be one of those teen-angsty pieces of shit that isn’t worth the pages it’s written on. However, allow me to enlighten you a bit, as is my prerogative as the steward of this story. Rather, let me rectify that sentiment a bit; I mean not to chide you and your preconceived notions of my lived experiences, but I aim to address a few matters of concern you might have.

Yes, I am a white man in my early twenties, so if you wish to call me out for my privilege, please do so correctly informed. I do not deny that I have it better than many of my fellow citizens, but do not allow that to blind you from the actual intent of what I am to share with you. My name—unimportant. It could be Chad, Blake or Christian, but at the end of the day that matters very little. They say to know one’s name is to have power over them. I believe, however, that that is utter bullshit.

Here, disheveled in my thoughts I write frantically. I hope that by the end of this that my story has left you feeling stronger, or at least will guide you away from the demons that have plagued me.

I was sixteen when I first felt betrayal as I walked in on my then-girlfriend cheating on me with my best friend.

Perhaps now I’ve piqued your interest. I’m more than just a name on a page that most people won’t read. I’m something breathing, living, evolving and suffering. I’m like you; equivocating my way through the social menagerie in search of something more than what is here. Isn’t that what we all want though? To be part of some grand adventure that life has in store for us.

But again, I digress.

The story I aim to tell here is one of growth and discovery as much as it is about sadness and suffering. One typically leads to the other, no?

I will also unapologetically proclaim my morbid sense of humor. It is simultaneously a godsend and a curse, but nevertheless will aid the points I’m attempting to illustrate. Temporal anomalies will abound, names may be changed, but otherwise everything I’m going to tell you is true. Believing it or not, well, that lies in your hands. I prefaced this entire thing with how I might be lying through my teeth, but then again, what truly constitutes a lie? Is it truly false if something is to be gained from its explication? That, my friend, is up to you to decide.

Tim O’Brien once said something great about the nature of truth and fiction, but alas, it slips my mind in this present moment. Something along the lines of a truth being utter bullshit and a lie that can be truer than the truth. However, the point I’m trying to make is that everything—names, times, locations, etc.—are all arbitrary. Focus less on the minutiae and gaze upon the larger frame and I promise that you might just get what you came here for.

I promised you a story, so let’s be on with it.

Alexander Breth is a fourth-year English writings major. He can be reached at AB834895@wcupa.edu.