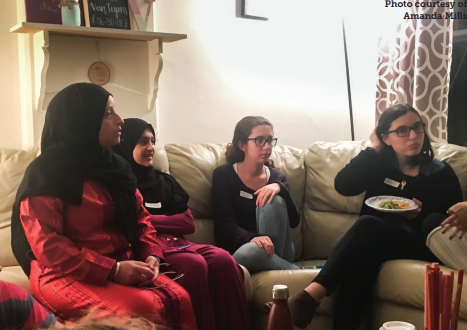 Sixteen women huddle in a living room off Sharpless street, laughing, chatting, chowing down on pizza, cookies, chips and guacamole. Hugs and smiles abound as more women enter in and join the group. They go around the room and introduce themselves, stating which Disney princess they identify with, their Myers-Briggs type and where they fall in their family order. The girls also state their religious affiliation, something that generally is not brought up immediately in American social situations. Smiles, giggles and more smiles ensue.

The Muslim Student Association, Hillel, the Jewish community and the Christian ministry, Cru, were in attendance. The leaders of these three religious organizations on campus decided to build bridges and form friendships despite the differences in religion. Their spiritual allegiances are at the core of who these women are, and that idea alone, despite doctrinal differences, was a reason to meet.

“I thought it was a beautiful get together of sisters with interest in the same thing, which is faith. It wasn’t antagonistic at all, it was just all of us getting together to discuss [religion] in a loving way, and I thought that was something special,” says Hannah Schultz, a senior psychology major. Schultz is president of Bridges, a branch of Cru that aims to love international students through the Gospel and name of Jesus.

This sisterhood-bonding across religions is not common. The reason why they gathered is exhibited through the image of unity between women who share different religious beliefs. The women leaders of three religious organizations on campus decided to meet, discuss their faith and get to know each other better; an olive branch, of sorts.

“MSA has hosted numerous sisters nights within our club as a time to just hang out and spend time with members of the organization. This year, we wanted to make it even more special by hosting it as an interfaith event,” said Waneeza Mughees, a senior pre-med major and president of the Muslim Student Association.

After brief introductions, they got into the matter at hand. “Okay, let’s talk about faith!” said Mughees. They went around and explained the tenets of their faiths and allowed room for questions. The atmosphere, some claimed, didn’t feel uncomfortable, just heartfelt and of earnest intrigue. First, the Cru representatives explained the narrative of the Bible and how it all reflects back to the Gospel and life of Jesus.

“We were saved by grace through faith in Christ alone,” said Amy Soster, a senior communication studies major and a leader of the women’s ministry within Cru.

“God had a plan of redemption all along,” said Caroline DeRobertis, a junior social work major. Christianity has an assurance of salvation, and that assurance gives Christians confidence in their spiritual walks.

Schultz said that through knowing Jesus, “We can feel God in our hearts. We have a personal relationship with Him.”

Questions were asked, pondered and answered. Cru meets every Wednesday night at 8 p.m. in Main Hall 168.

Then the Muslim women explained the main tenets of Islam. “To go to heaven you have to believe in Allah and be a good person,” said Mughees. In Islam, there is also a day of Judgement where one’s good deeds are measured against their sins, as humans are believed to have free will, Mughees said.

Hanifah Thorpe, a sophomore psychology major, explained to the group her struggles of being African-American and Muslim. “There’s no color to religion,” she said. But through wearing the hijab around campus, “I teach people about Islam all the time.”

The women talked about difficulties they face as believers at a secular university, spanning from discrimination against the hijab to the waning interest in Jewish culture among millennials.

Nimrah Baqai, a sophomore nutrition major, laid out the reasons why Muslim women wear the covering. “It’s a sign of modesty and protection . . . although God commanded men to lower their gaze before he commanded women to cover up.”

Baqai has been involved in MSA since she first began attending WCU. She is the secretary of the organization and says they meet every other Thursday in Schmucker North room 191.

Lastly, Hillel explained the main ideas of Judaism. The women talked about what it means to be Kosher and how the Torah consists of the first five books of the Christian Bible. Contrary to popular belief, the Torah is not the entire Old Testament, just Genesis, Exodus, Leviticus, Numbers and Deuteronomy. The Jewish God is “Almighty, all present and all knowing,” said sophomore philosophy major Ellie Sullum. “Judaism doesn’t seek to expand, they just seek to go on.”

In Judaism, community is everything. Jews celebrate their Sabbath from sundown on Friday to sundown on Saturday.

Hillel’s West Chester chapter President Lisa Patrick says she got involved with Hillel right away during her freshman year at WCU. “Before college I wasn’t involved with a Jewish community, but being involved here at WCU brings me so much joy and happiness,” said Patrick, a junior English and Spanish major.

Shelby Kaminsky, a sophomore English and literature major and secretary of Hillel says they meet every Tuesday for social activities and every other Friday for Shabbat, after sundown. Both of these events take place in Sykes.

Amanda Mills is a fourth-year student majoring in political science with minors in Spanish and communication studies. She can be reached at AM836938@wcupa.edu.