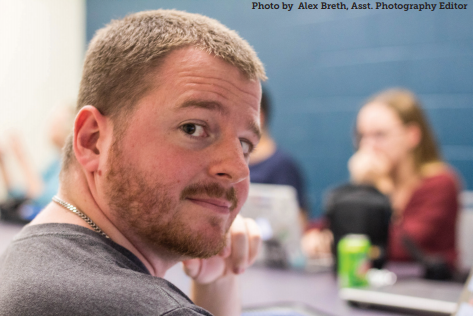 We all have had that one person in life that has seemed to follow us around, not of their own volition, but by a seeming thread of fate that has yet to be fully teased out. It may be through similar classes or seeming divine providence; yet, it begs a curiosity for their life, their story, their raison d’etre. For me, this person was Alecc Costanzi.

Costanzi, 28, is an English major at West Chester University with a minor in creative writing and game design. However, before he was any of these, he was a 19 Delta Calvary Scout in the United States Army.

While serving as a Calvary Scout, Costanzi was injured and prohibited from continuing work in the field.”When you’re broke in a combat unit, you’re only kinda good for the bullshit. Scrubbing toilets and cleaning barracks.”

Luckily for him, however, he had a friend in the Chaplain Training Center who arranged for Costanzi to serve as a “Chaplain’s Assistant Assistant.” Constanzi medically retired three years later, and after leaving the Army, he made his way to West Chester University.

Costanzi said that the culture of the Army, which taught him discipline and accountability, is the same culture from which his struggles to cope with civilian life originated.

“In the Army, every action you do serves the greater cause. And here I find myself struggling to find the motivation to go to class, even at the risk of getting an ‘F.’ I just struggle to see the point of some of the classes I have to take.”

This marked a transition in our conversation, where instead of this becoming the profile it led to something greater: “Besides the depression, besides the anxiety, it’s more of like, ‘Why am I doing this?’”

One of the challenges that tends to go unnoticed, particularly amongst student veterans, is their emotional state. At several points in our discussion, Costanzi mentioned these words, or sentiments, pointing directly at them. When asked about the support systems that West Chester University offers for student-veterans, he said this:

Alexander Breth is a fourth-year English writings major. He can be reached at AB834895@wcupa.edu.