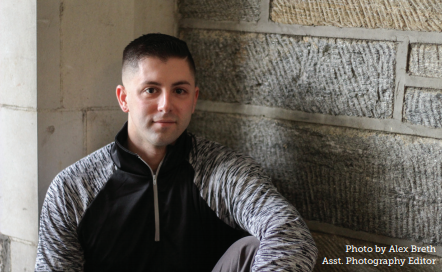 Mike Diorio is a 27-year-old veteran studying criminal justice at West Chester University. Diorio’s truly noteworthy experiences, both in and out of West Chester, contribute to the unique community that we at WCU are so proud of.

“I’ve been in the Pennsylvania Army National Guard for six years. I’ve worked with the Veterans Center and the Veterans Group since I got here. I’ve done a bunch of different missions with the National Guard. I’ve worked blizzards; I’ve had to drive people to and from hospitals; I worked security when the pope came to Philadelphia and I’ve done a lot of training missions. I do GI spatial intelligence and regular analysis for them… My experience as a veteran has a huge influence on my experience a student. It’s a lot different being a veteran in a classroom rather than being somebody coming right out of high school. We’re not afraid to ask questions and we’re not afraid to say ‘I don’t understand something’ or ‘I want to understand this more.’ We’re not afraid to reach out to help other students. We also take it very seriously because a lot of us can clearly see how our education is going to help us.”

Not only has being a veteran helped shape Diorio into who he is today, but so has his experience as a part of the LGBT community.

“I’m a part of the LGBT community, and when I was coming out of high school, not a lot of people were understanding of that.”

“I had to move around a lot and live with a lot of different people. I think that’s where I gained my social skills. When I enlisted into the army, you weren’t allowed to be out. I could’ve gotten discharged. It’s really interesting now to see the total parallel shift from then to now. Today, they encourage you to be out and to have that kind of honesty with your troops,” he said.

Diorio has recently been accepted into the National Geospatial Intelligence Agency, a government agency that uses satellites to support both military missions and humanitarian missions. During his time at this new position, he hopes to either earn his PhD or possibly start law school. However, in the meantime, West Chester University is lucky to have him as a student.

“I came to West Chester because I love the atmosphere,” he said. “There’s so much to do here. The Veterans Center and the ROTC program are great, and everybody is just pleasant. It’s a really nice place to be.”

Katherine Mash is a second-year student majoring in communication studies with a minor in computer science. She can be reached at KM854840@wcupa.edu.