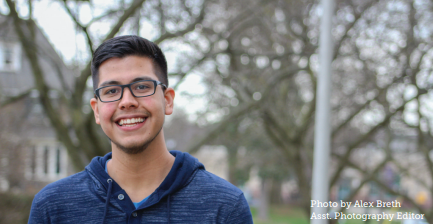 Alex Garcia is a 20-year-old sophomore from Harrisburg, Pa. who doubles as a political science major and West Chester University’s biggest fan. A first generation American, he always takes advantage of the opportunities college provides.

“My dad is from Mexico and he immigrated to America in the late ’70s when he was about 18. My mom is from Puerto Rico, and she officially moved back here in the late ’70s. I actually didn’t speak English until I was about five years old, and I had to start using it in school. Coming to college was such a big deal for me and my family. I’m the second out of 27 cousins to pursue a bachelor’s degree. My parents came here to work and to give me a better life, so I couldn’t just sit there and waste my life and put theirs to shame… I picked my major because of current times. I see the mistreatment of minorities. I look at everything that’s happening in the world and think, ‘If you want to make a change, you have to be a part of it.’ You have to make the change. That’s why I’m so involved here at school.”

Garcia’s on-campus involvement reflects his future of helping others.

“I want to be able to be a voice for minorities—people that look like me. In the future, I would love to work for the UN or maybe even work to be an immigration lawyer because I’ve witnessed so many families being ripped apart. You don’t really know the harsh reality of these situations until you’ve witnessed them.”

While Garcia is undoubtedly proud of his school, this spirited Ram’s mission is to spread the love.

“I want to see more student involvement and more support for WCU. I want to see more school spirit. While my main goal in getting really involved is helping people out and being there for the students, I also just want to see everyone cheerful. So until I graduate, that’s going to be my biggest goal: to see this place turn purple.”

Katherine Mash is a second-year student majoring in communication studies with a minor in computer science. She can be reached at KM854840@wcupa.edu.