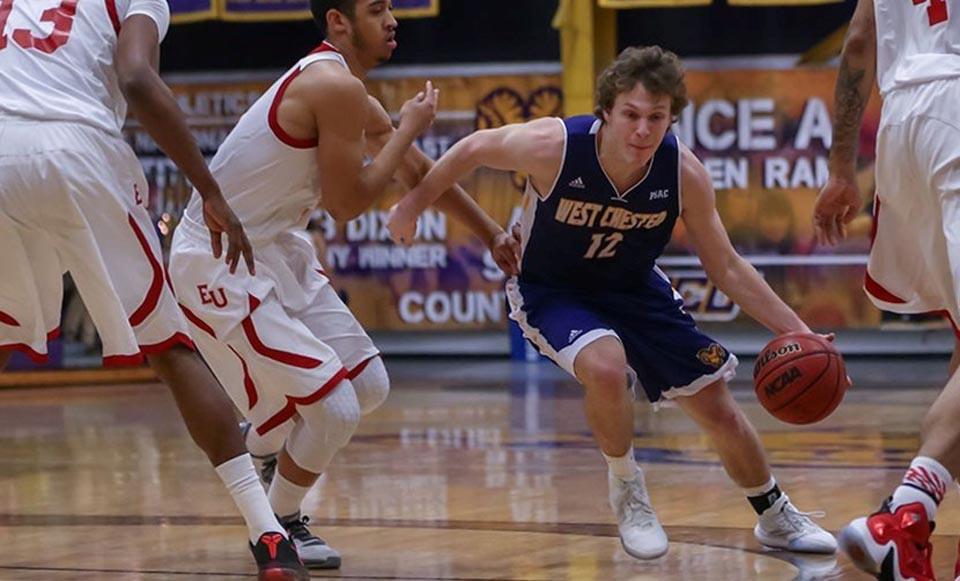 The newest installment to the sports section of The Quad puts a West Chester student-athlete on the hot seat for a sitdown interview to find out more about their lives besides what fans might see during the games.

In his first season as a Golden Ram, Matt Penecale set a freshman record for assists in a single season with 143. Penecale started 29 games last year for West Chester, averaging 10.3 PPG, 4.9 APG and 3.5 RPG last season. Penecale’s season was highlighted in the PSAC Semifinal game last season, where he hit a game-winning buzzer beater to send the Golden Rams to the PSAC Championship Game.

Matt Penecale: I have an older brother who played basketball, and I just took after him with sports. I always followed him around, so when I was five and he was 12, I’d always be playing. Both of my parents were athletes, so sports are just part of my genetics.

DH: Did you play any other sports in high school?

MP: I’m a hometown kind of guy so I have to like the Sixers. I definitely trust the process with Joel Embiid. College teams, I’d have to go with UNC.

MP: That’s a tough one, but I have to go with a little fettuccine alfredo action.

MP: Definitely not Lawrence. I’d have to go with Buddy’s Burgers; it’s right around the corner from my house.

DH: Who are three people you’d like to have dinner with?

MP: Easily Mike Tyson as number one; he’s a pretty big role model of mine. Kanye West and Obama.

DH: Who is the most famous person in your cell phone?

MP: Has to be reigning PSAC Defensive Player of the Year and former Golden Ram Matt Wiseley.

DH: Do you have an athlete you admire or model your game after?

MP: Not really, but I get a lot of comparisons to Goran Dragic on the Miami Heat.

DH: What’s the best advice you’ve ever been given and from who?

MP: My senior year physics teacher. He told us all to be like an otter. They don’t really care and they just go with the flow. You don’t want to go not caring about anything in life, but you can’t always control what happens to you in life, but you can control your reaction to what happens. I always took that as looking at the optimistic side of things.

DH: Do you have any pregame rituals or superstitions?

MP: No real superstitions, but I always wear white socks even though I don’t consider that a superstition of mine. A lot of people listen to hype rap music before games, but I like to listen to some Florence and the Machine or some Frank Ocean, and that’s my little pregame ritual.

MP: My senior year we won the district championship at Temple, and it was the first time Abington won it in 40-some odd years. That was really special for me to be a part of school history like that.

DH: What made you choose West Chester?

MP: The basketball program was a big part, also the education and location. There’s no real down side to this school. I came and visited in the summer and met with the guys on the team, and we hit it off really well.

DH: When you hit the shot in the PSAC Semifinals, what kind of emotions were going through your head?

MP: I honestly almost blacked out. They interviewed me afterward and I couldn’t even put into words what just happened. It was such a crazy feeling that I’ve never had before. The best feeling I’ve ever had is the only way to describe it.

DH: What was the hardest thing to adjust to during the transition from high school basketball to college?

MP: The speed and size of everyone. When you get in the lane, everyone is much bigger and faster. I’m a big fan of the shot clock. I think it makes the game more fun. Everyone can score, and everyone can play at a high level, where in high school you might only be playing against one or two good players, and the rest are guys that kind of just play to play.

DH: You guys made it to the PSAC Championship game and NCAA Tournament your freshman year. What was that like for you?

MP: It was awesome. In high school I was used to being on a winning program, and it was nice to have it stay the same in college. It’s good for West Chester to have a good tradition in basketball where it’s expected to do that year in and year out, and to be a part of that is great.

DH: Who’s the funniest guy in the locker room?

MP: We have a lot funny guys on the team, but I have to go with my man Rel, Tyrell Long. He always has me laughing.

DH: Do you have any nicknames, and where did you get them from?

DH: After losing three seniors, including team captain Matt Wiseley, what’s it like for you only as a sophomore to have to step up and be a leader for this relatively young West Chester team?

MP: It’s tough, so it’s a role I’m slowly stepping into. Coach tells me every day I have to be vocal and help lead the guys. I definitely try to lead by example and play hard every day. It’s nice to have a fairly young team because I feel like we’ve all had to step up into a leadership role and hold each other accountable rather than looking up to one senior.

DH: Any goals for this season?

MP: There’s four goals every year. Win the PSAC East. Win the PSAC. Win Regionals, and win a National Championship. I know we’re young, but we have to hold ourselves to a high standard. If you don’t go in with goals of winning, you’re definitely not going to win, so you have to set your goals high and try to achieve them.

Penecale was named to the PSAC-East Preseason All-Conference Team along with fellow sophomore guard Malik Jackson. The duo of Penecale and Jackson will be looked upon to lead a young Golden Rams team to the successful season the program is accustomed to.